Amanda here….hope y’all aren’t getting sick of my posts, as Dan has taken to being LAZY with his ride reports!  As I write this, I am sitting beside yet another amazing campfire, this time on the bank of Dease Lake, BC.  As I mentioned before, there is not much in the way of Internet up here, so I will be writing some of these entries as Word documents a few days before I post them on the blog.  We actually had Wifi in Smithers last night, but it was SO slow that it took an hour to upload the photos, so I called it a night.

Backing up a day, yesterday we were awakened pretty early as the sun began to shine around 0430.  This won’t surprise most, but being awake this early did not make me too happy…sweet Dan quickly got my eye mask and ear plugs and pacified my crankiness.  When I did decide to wake up, we packed up the campsite and hit the road at 0730.  It was FREEZING…not literally, as it was only 45 degrees, but it was really cold.  Veneski made sure I was super comfortable with my pant liner and heated vest, so I was perfectly fine.   Where would I be without him? Oh yeah, that’s right, on a beach in Costa Rica with a margarita in my hand!

The scenery wasn’t very eventful, but we continued to see tons of gorgeous greenery and snow capped mountains. The closer we got to Smithers, the more mountainous it became.  We made a pit stop in Houston, BC to visit the Information Center, as true tourists do, and met a couple from Reno, Nevada who said that we have been bunny hopping back and forth with them for the last 4 days! It was really cool to compare travel stories and find out where they were headed next.  It seems like we will be hanging out with them for the next few days at least. 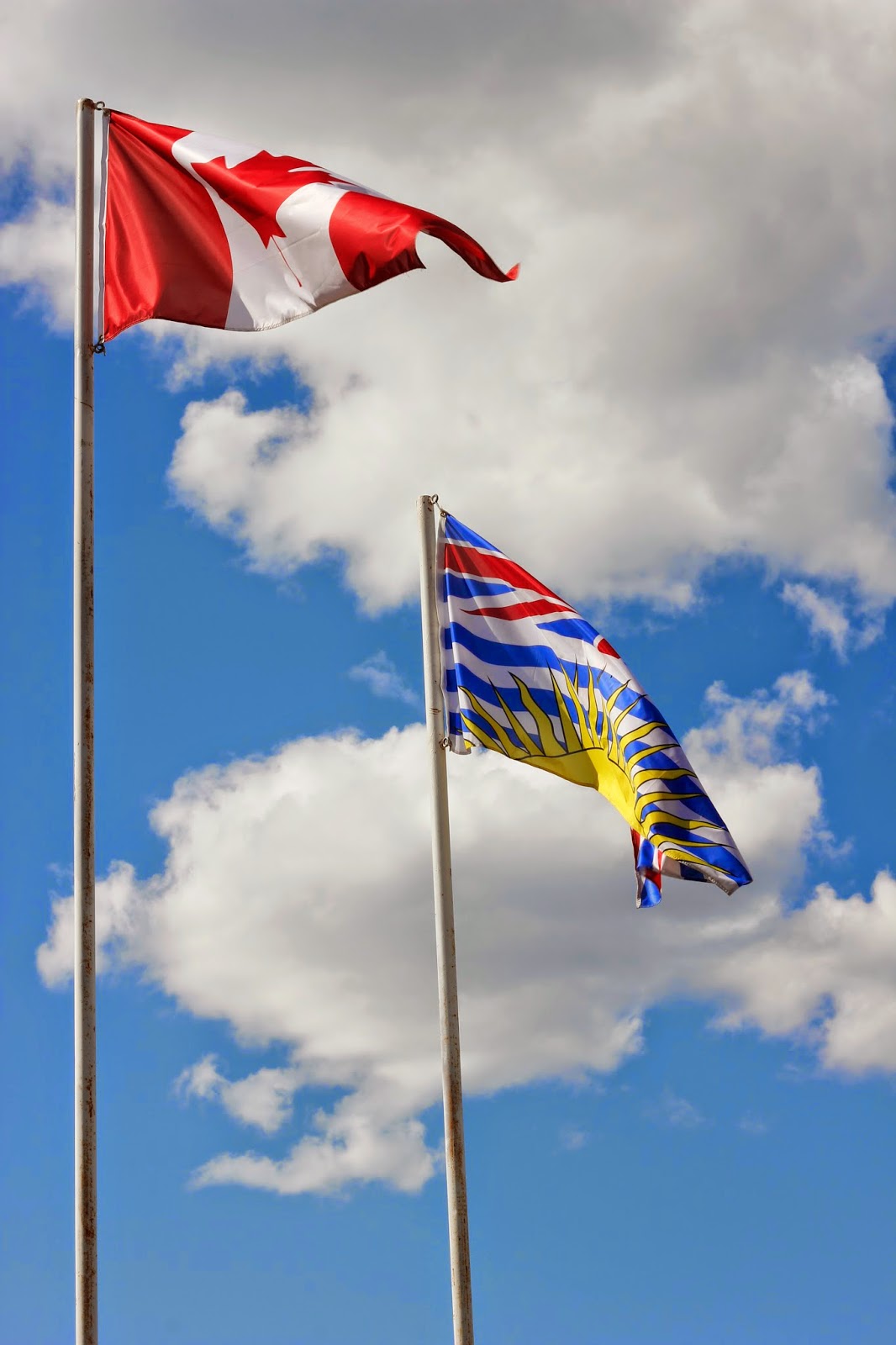 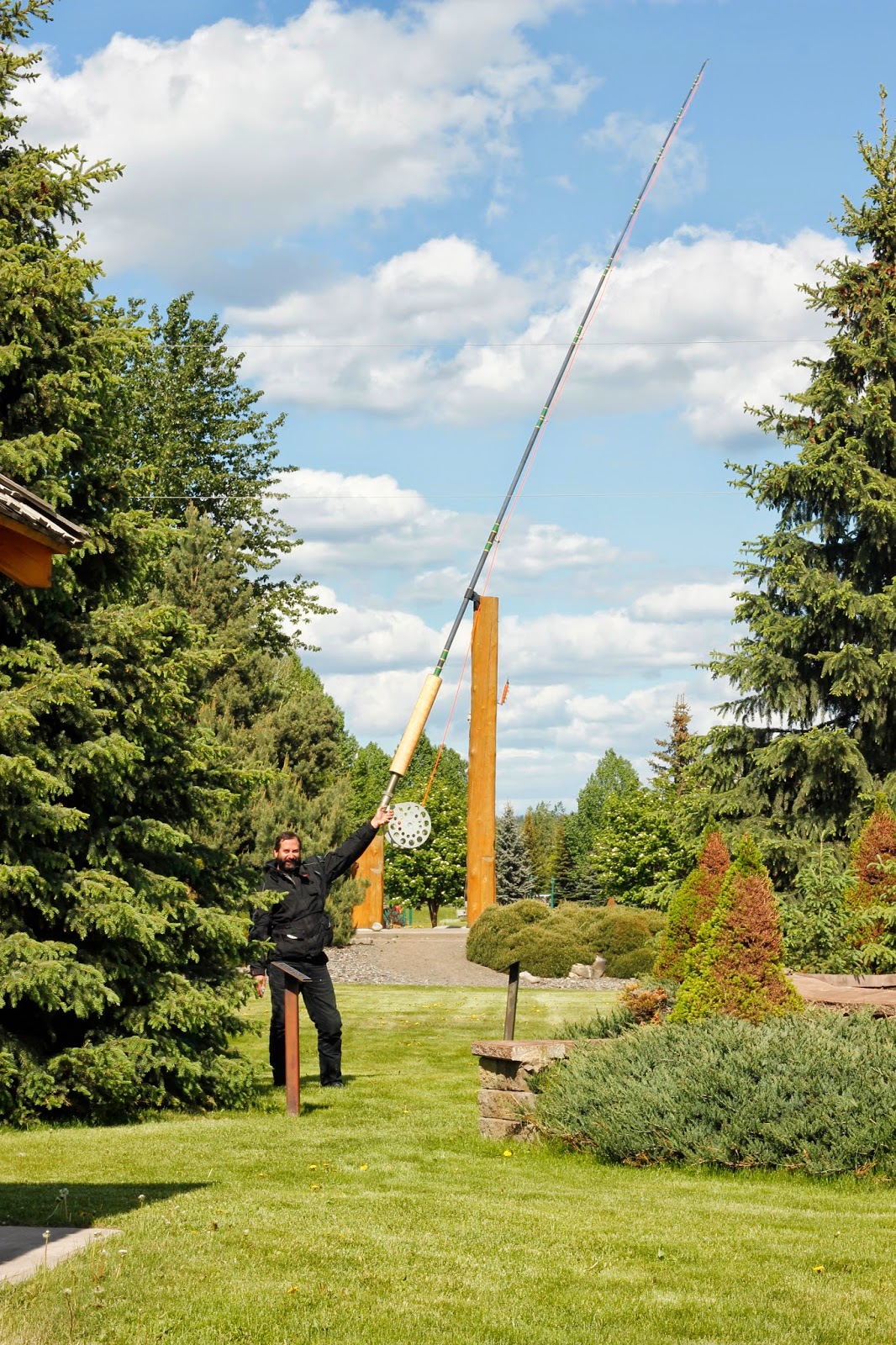 Largest Fly Rod in the Universe! 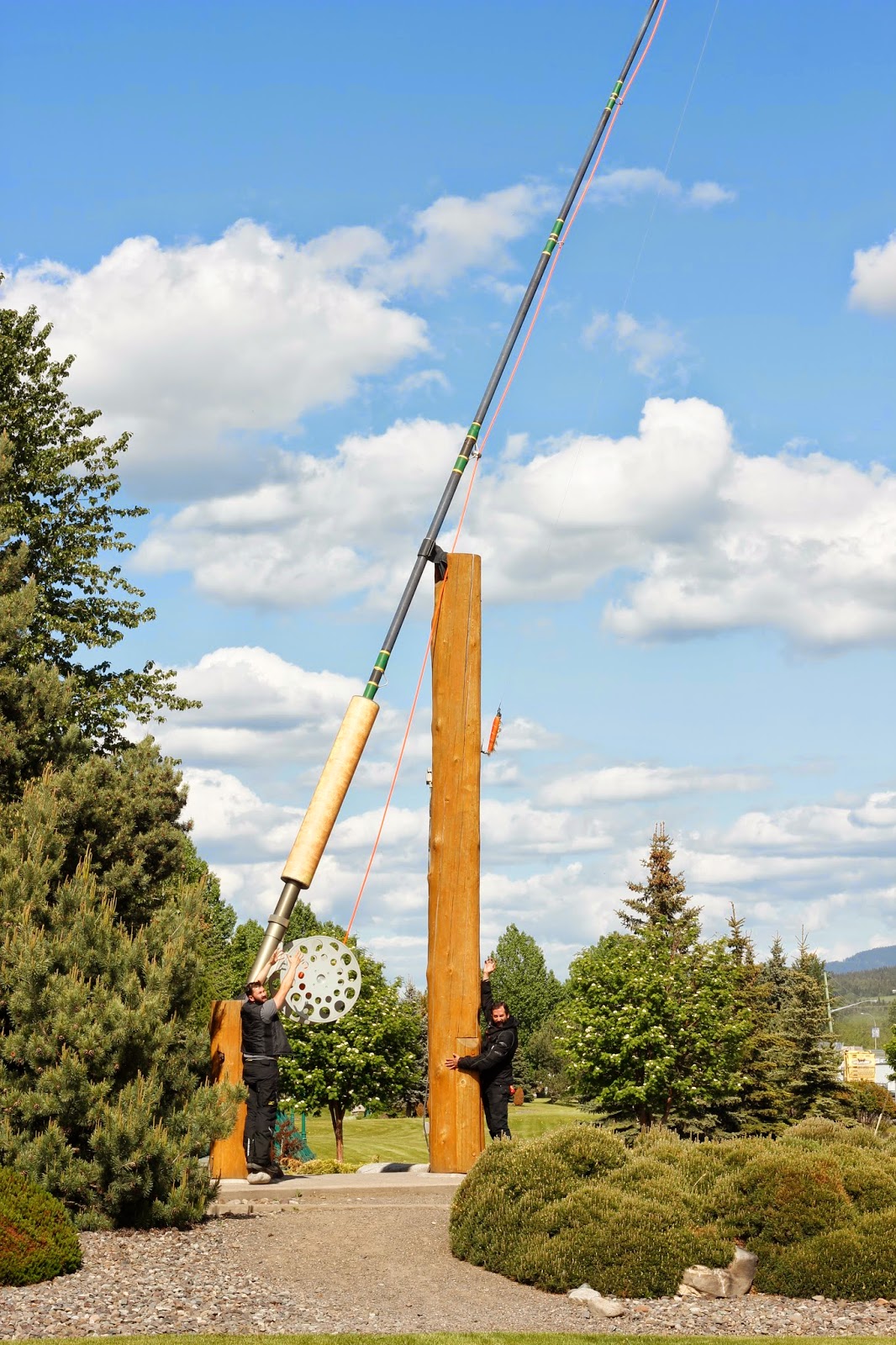 Boys with their pole 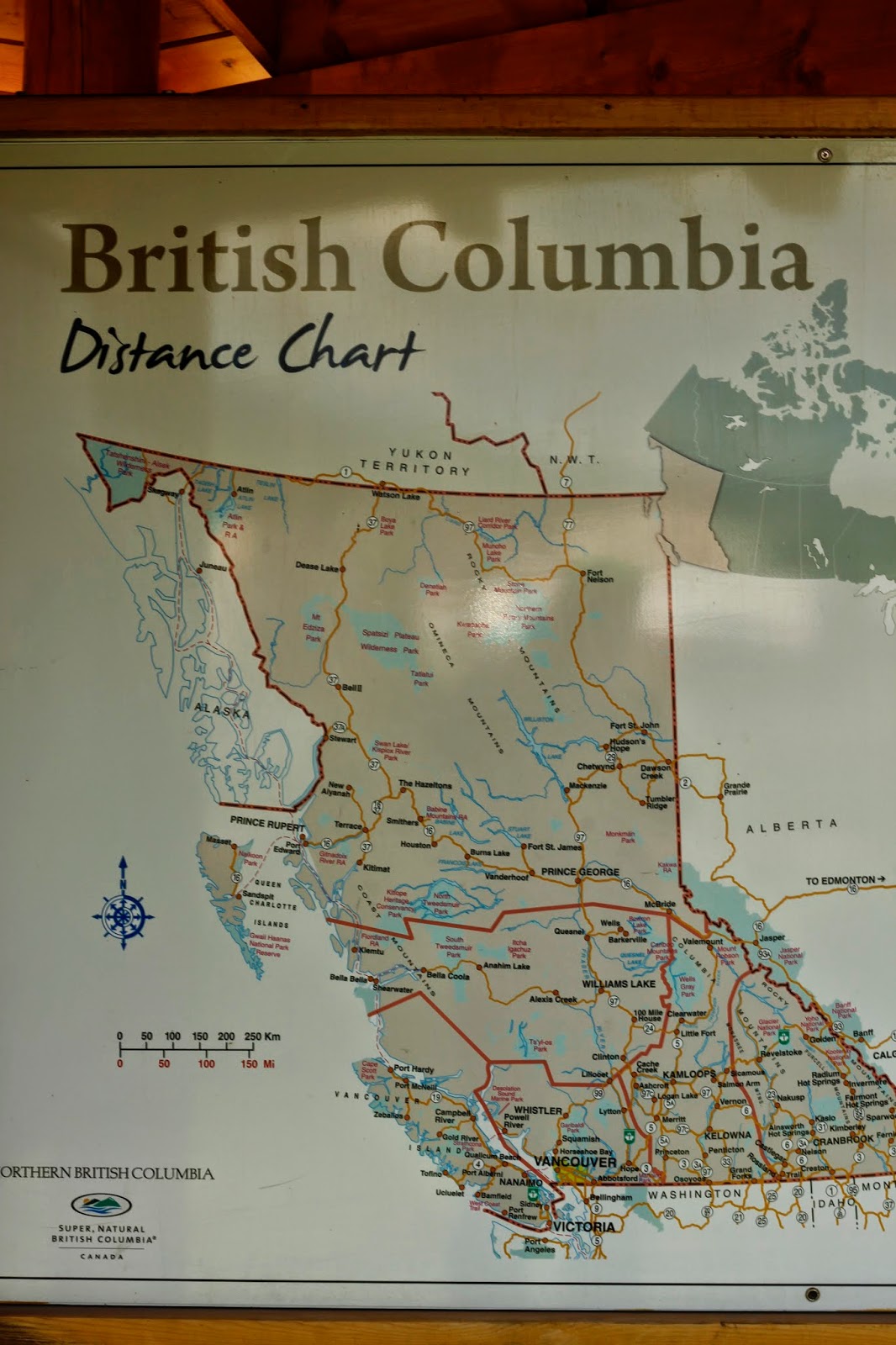 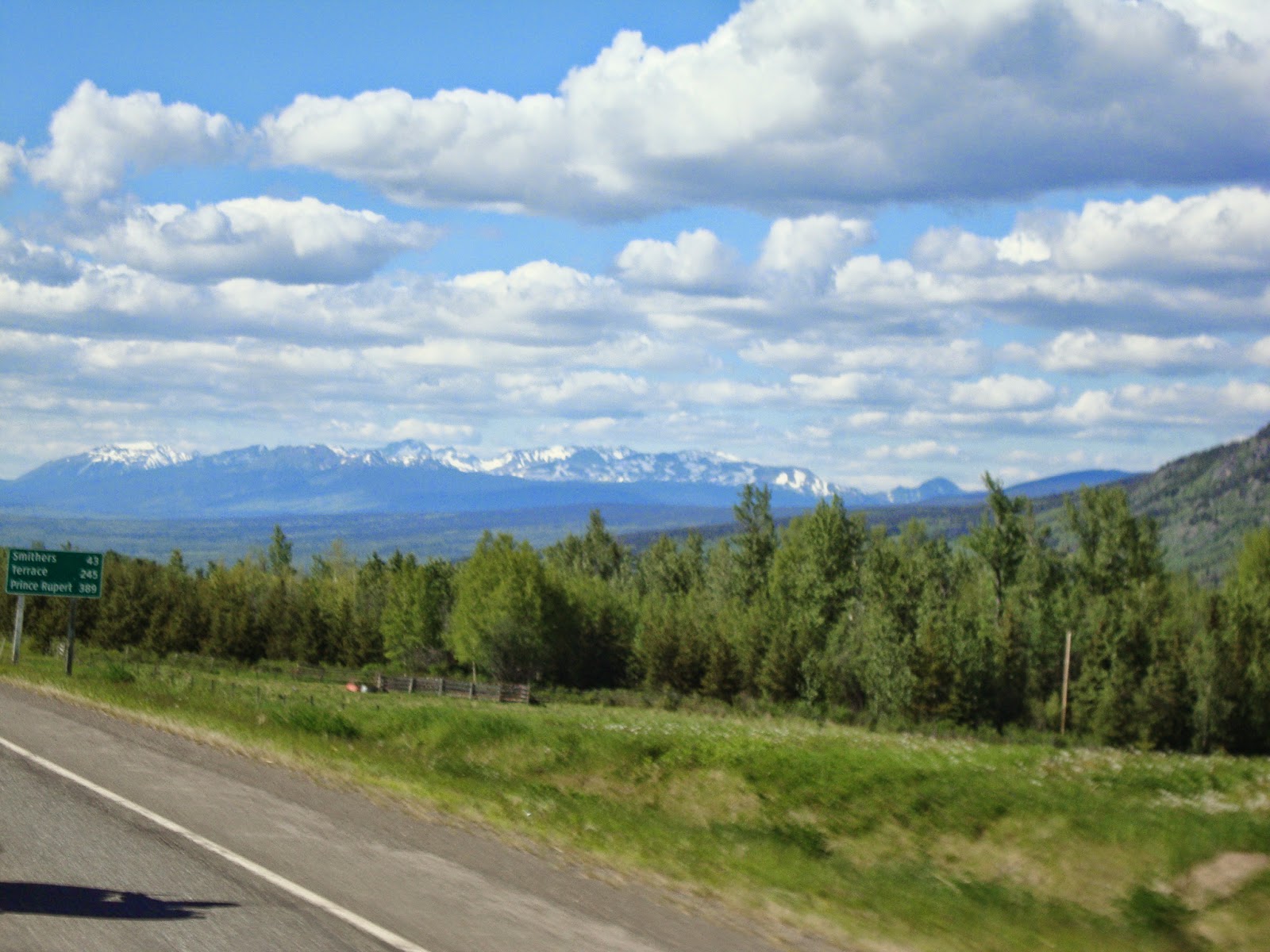 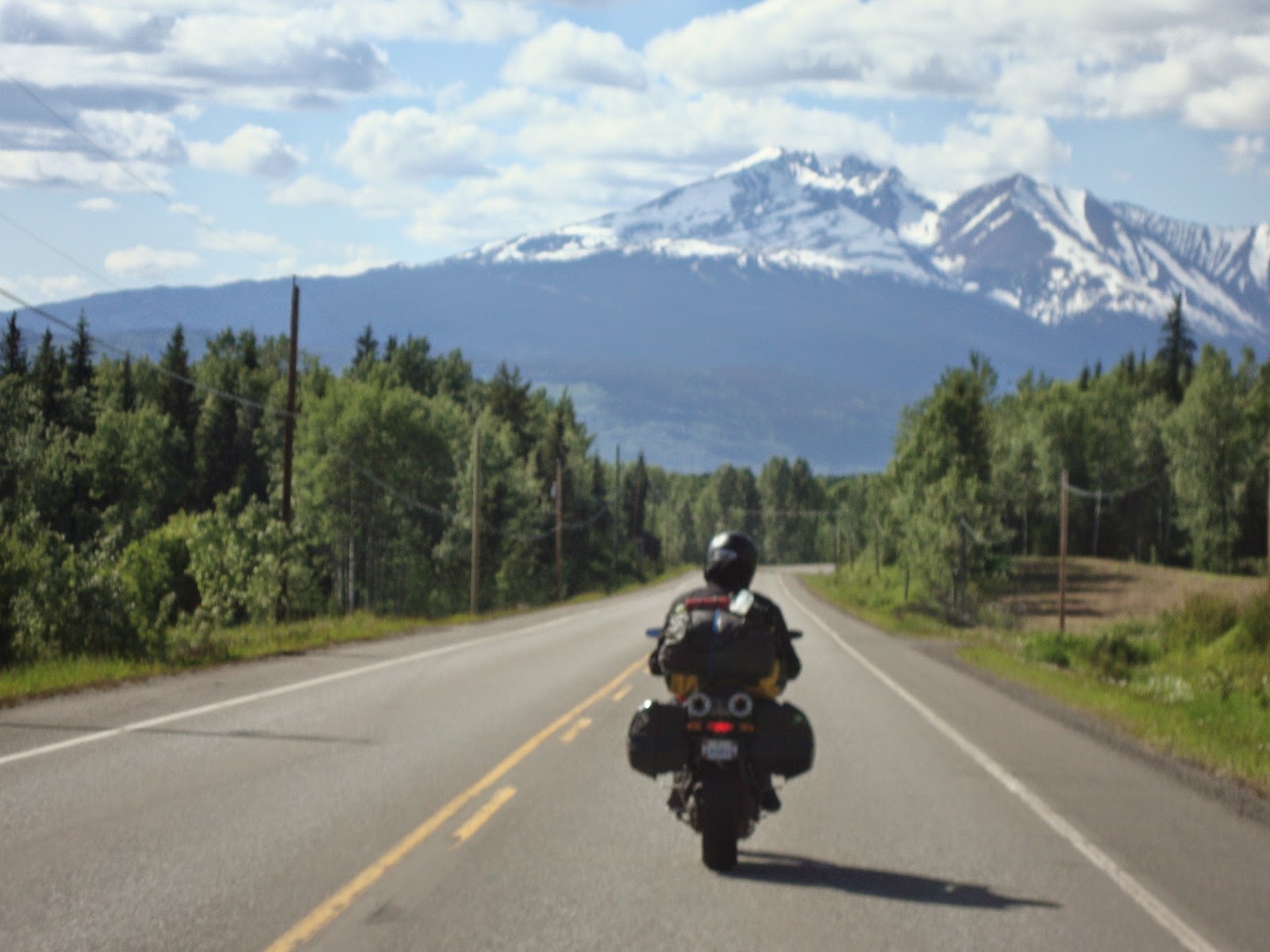 How about Ricardo with this incredible view? Couldn't have asked for more beautiful weather!

We arrived in Smithers around 1730 after riding for 440 miles.  This “big” small town was overrun with participants of a mine rescue challenge. Who wants to tell us what the hell that is? We hit a few different hotels before finding an awesome one that looked like a Swiss chalet, had a kick-ass view, and had a bar…SCORE! After Ricardo took his first shower in 5 days…you can use your imagination as to how our hotel room smelt prior to his scrub-down…we made our way to the bar….DUH! We had a great dinner and then passed out in our comfy beds, relishing the plush comforters and mattresses as we knew we’d be sleeping on the ground for the next few nights.

We woke up early this morning and hit the road! Dan is getting better at packing the bike up every morning.  Poor guy is going to be so glad when I leave and take half of our crap with me!  It was another cold morning and it was also pretty dreary…it drizzled most of our trip today.  The boys checked the weather report, and like smart little motorcyclists that they are, outfitted themselves and our gear in waterproof garb.  We were trying to mimic our timeline from the previous day and get on the road for a couple of hours before stopping for coffee and breakfast.  However, we quickly learned that our route was to be quite desolate.  As we made our turn at the Stewart/Hyder Split, were kissed civilization good-bye.  Within the first 30 minutes we were in awe of the scenery and wildlife.  We spotted a fox, jackrabbits, three black bears, and even a moose.  It was incredible to see these creatures in their natural habitats.  We spent the next hours of our trip gazing at lush green forests, huge mountain ranges, and raging rivers.

The adventure really began today when we drove 15 miles past a stop that we needed to make for gas.  For the next few days, our gas stops will need to be carefully calculated as we ride through some pretty remote areas of British Columbia and the Yukon.  The communities that we stopped in today for fuel and food were very small and so very interesting.  I tried to imagine what our lives would be like living such a simple lifestyle.  It also made me think hard about some of the things that I take for granted and the things that I find necessary in life.

We stopped for a quick lunch and to gas up in a small community called Bell 2.  There was little more than a lodge, gas station, and a heli-skiing company…that’s right…heli-skiing! Don’t worry, I kept Dan off of the helicopter and we got back on the road, out running the mosquitos that swarmed us in the parking lot.  In Bell 2 we met another man riding his bad-ass KTM 1190 Adventure-R from San Francisco.  He looked to be in his mid-70’s….right on!! 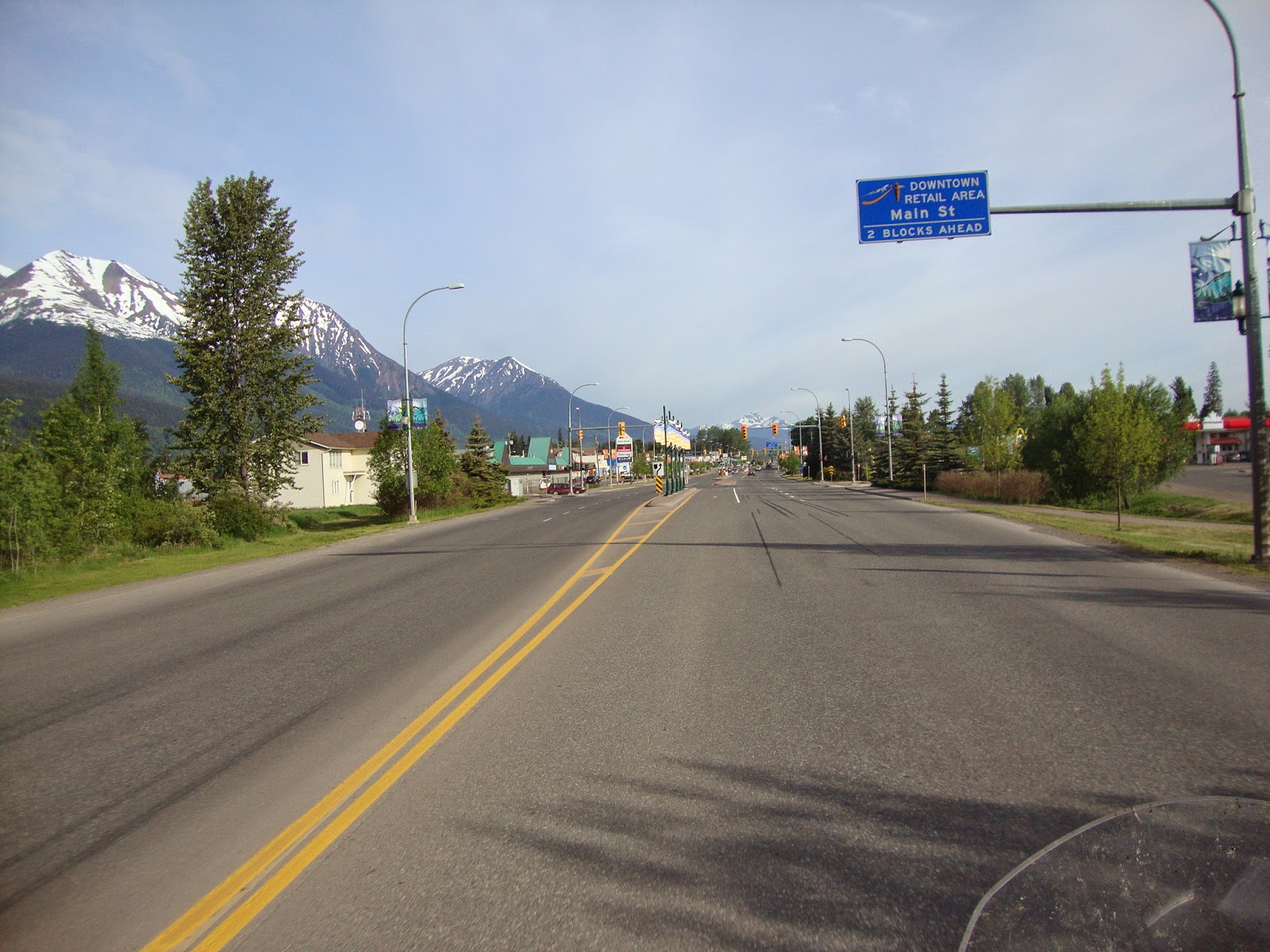 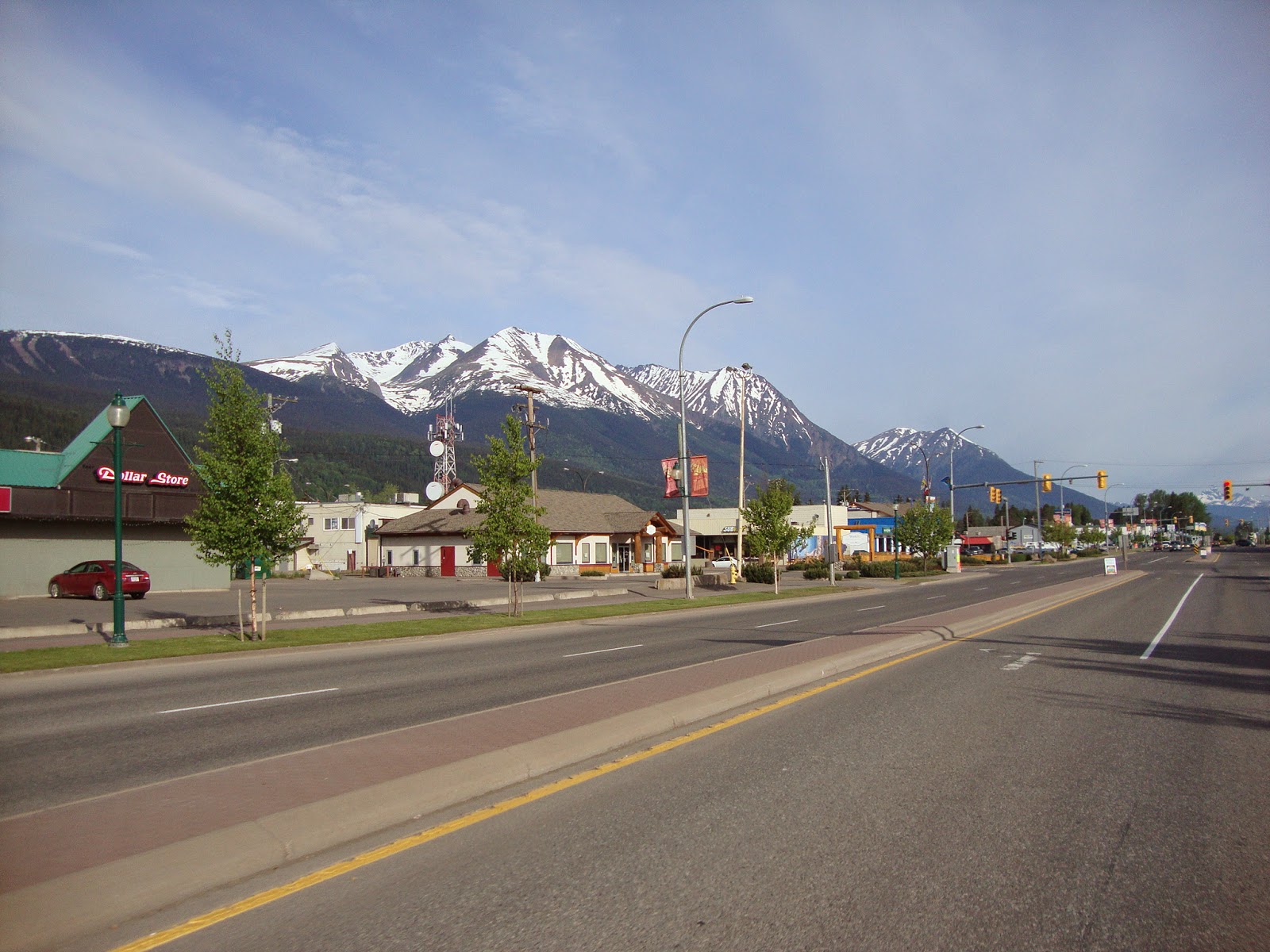 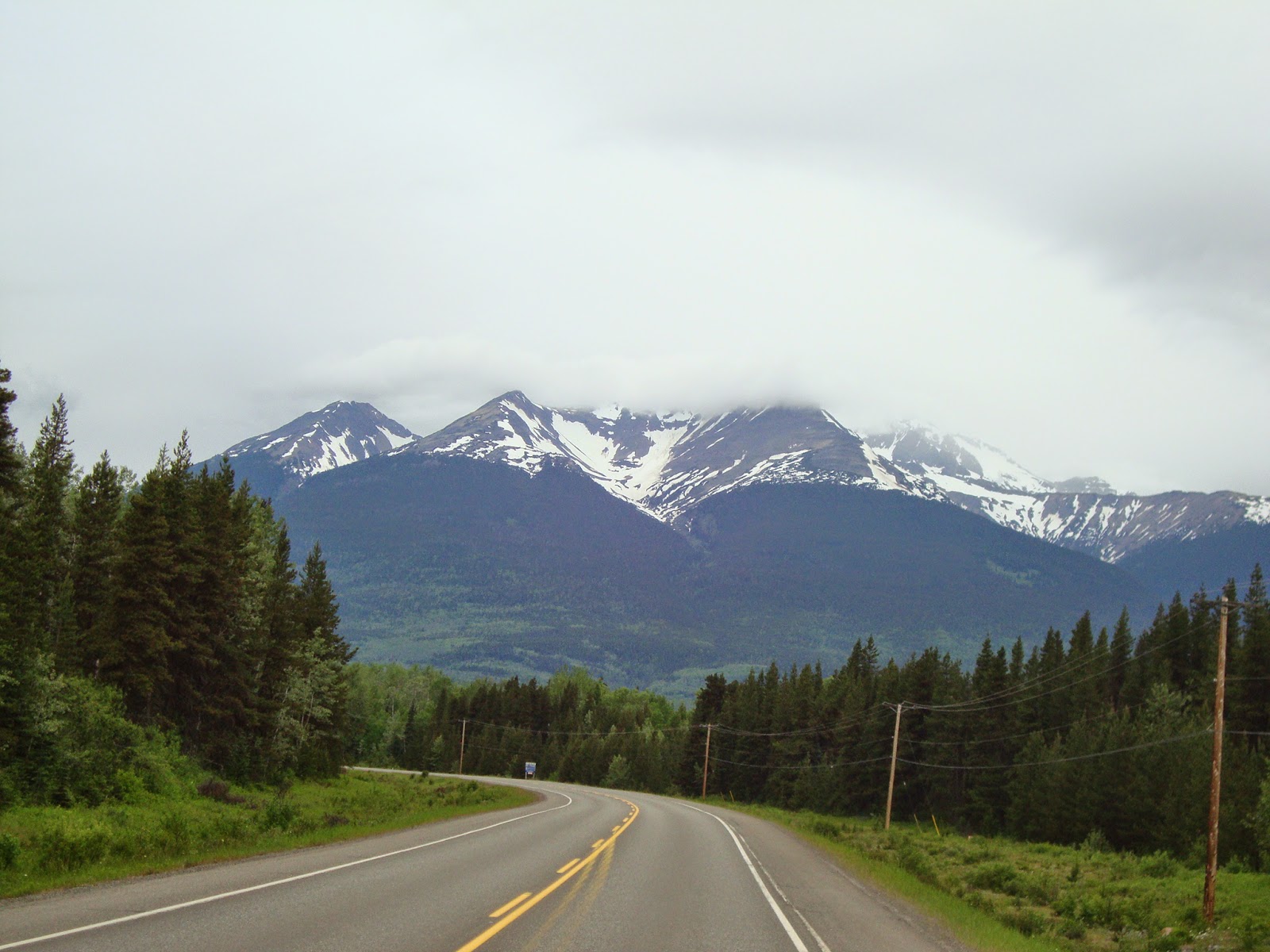 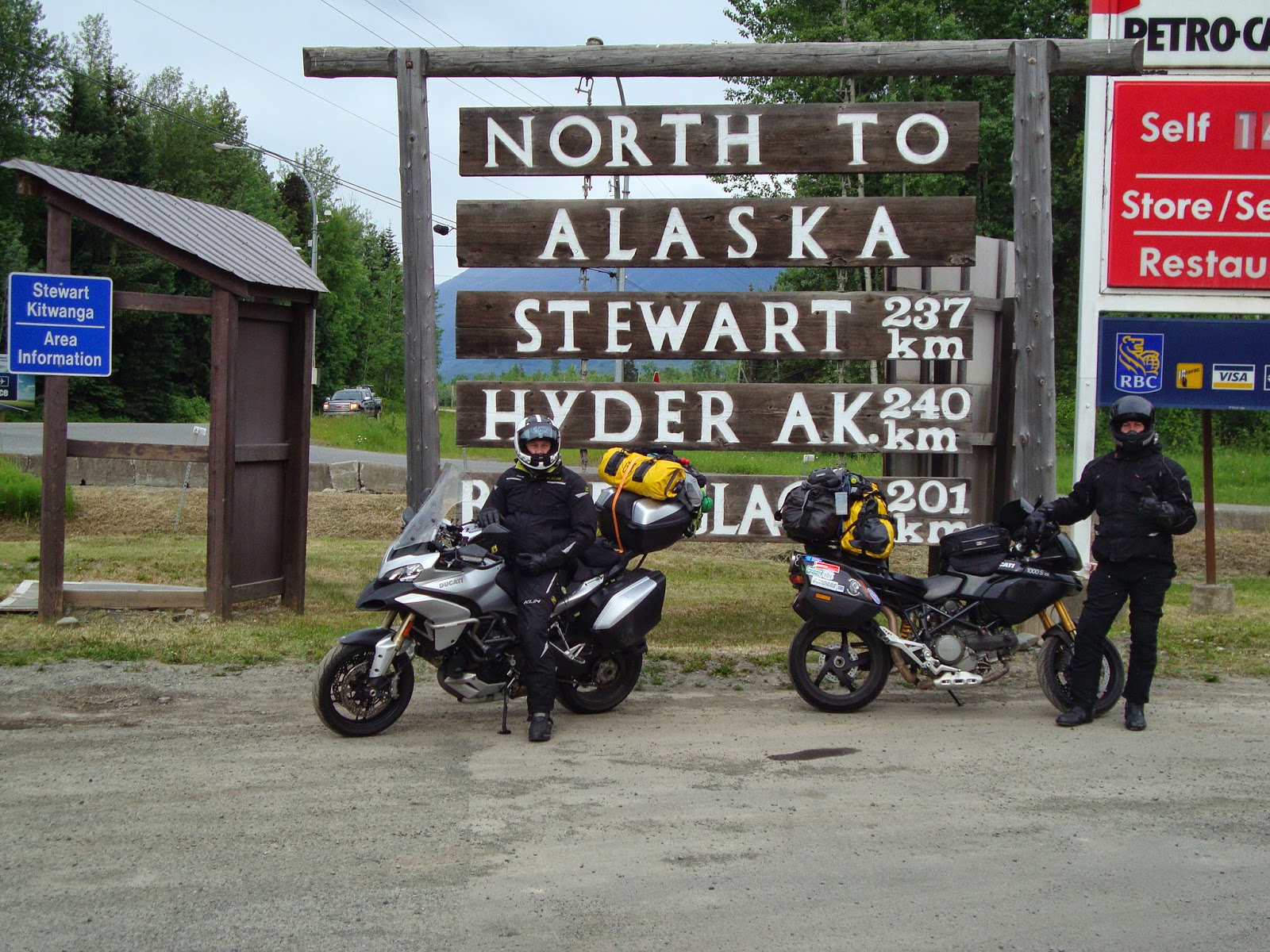 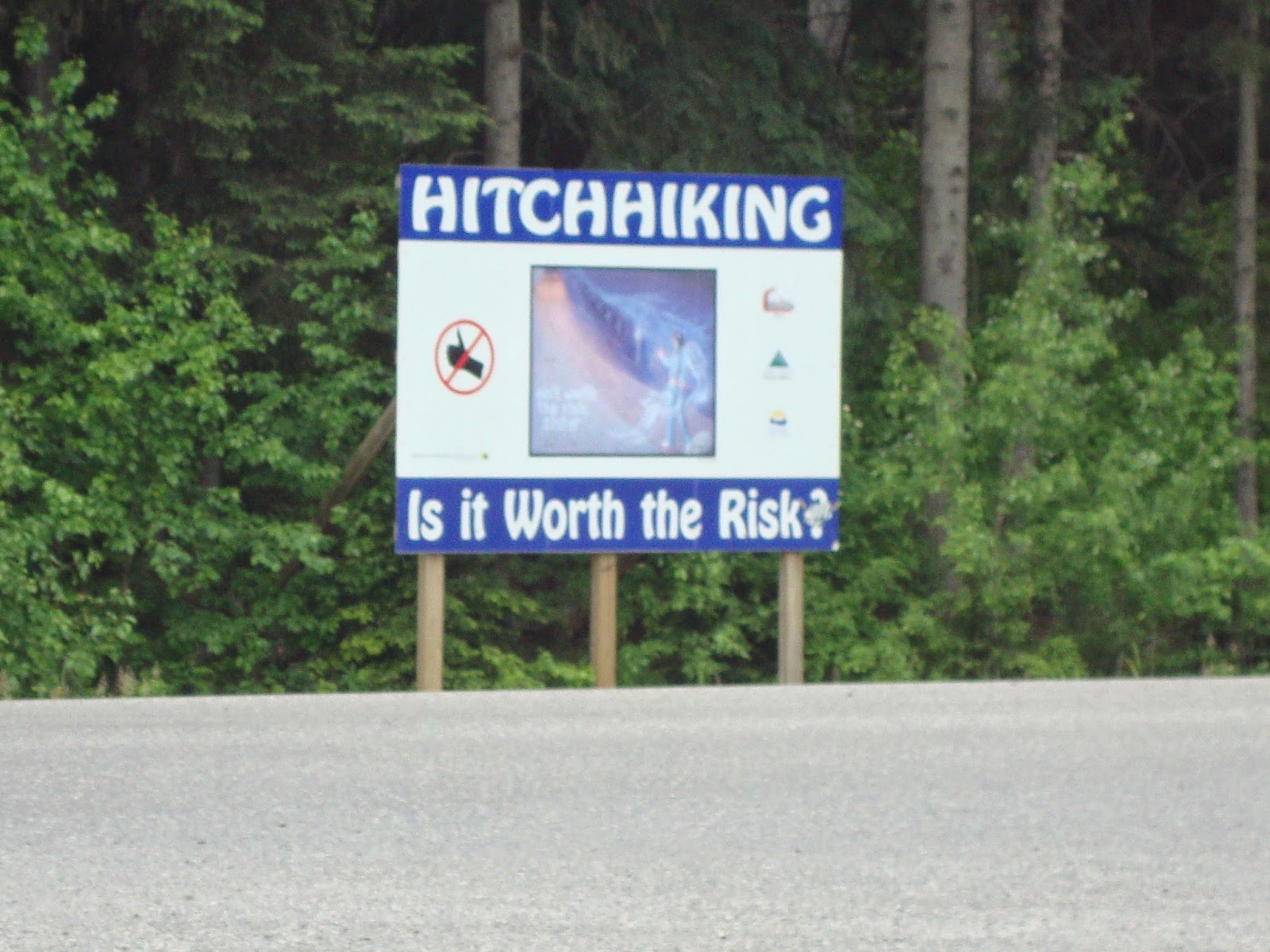 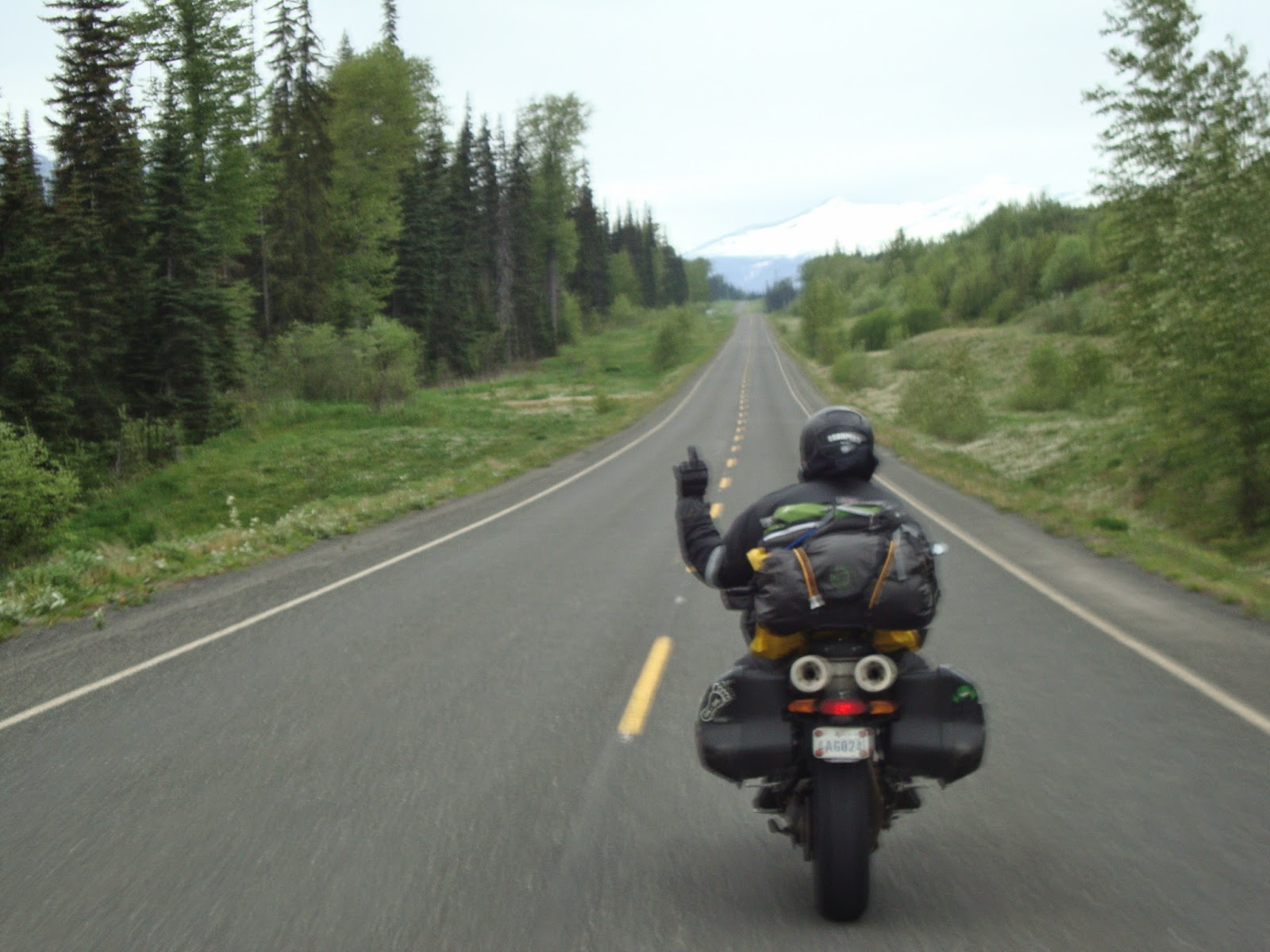 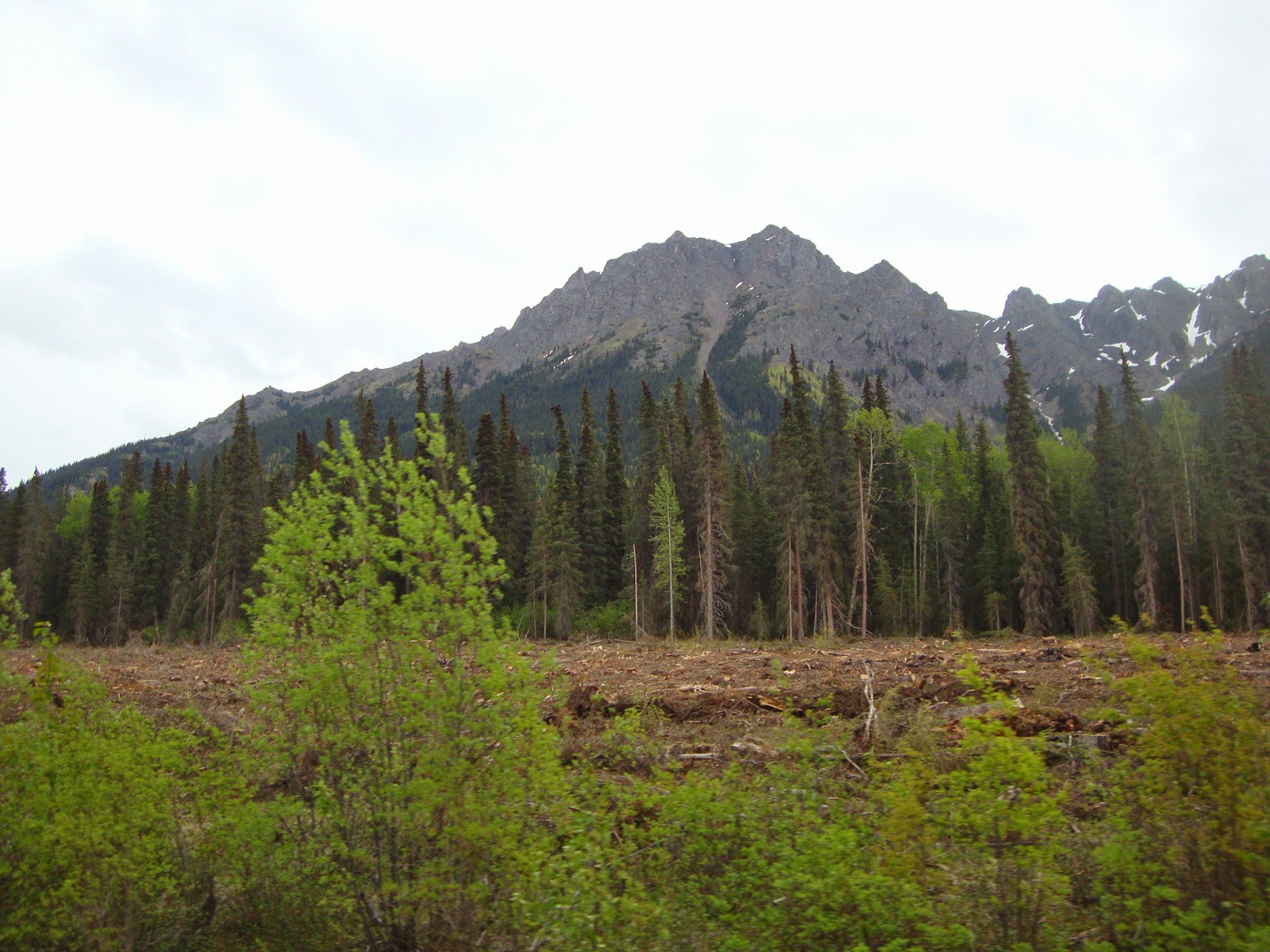 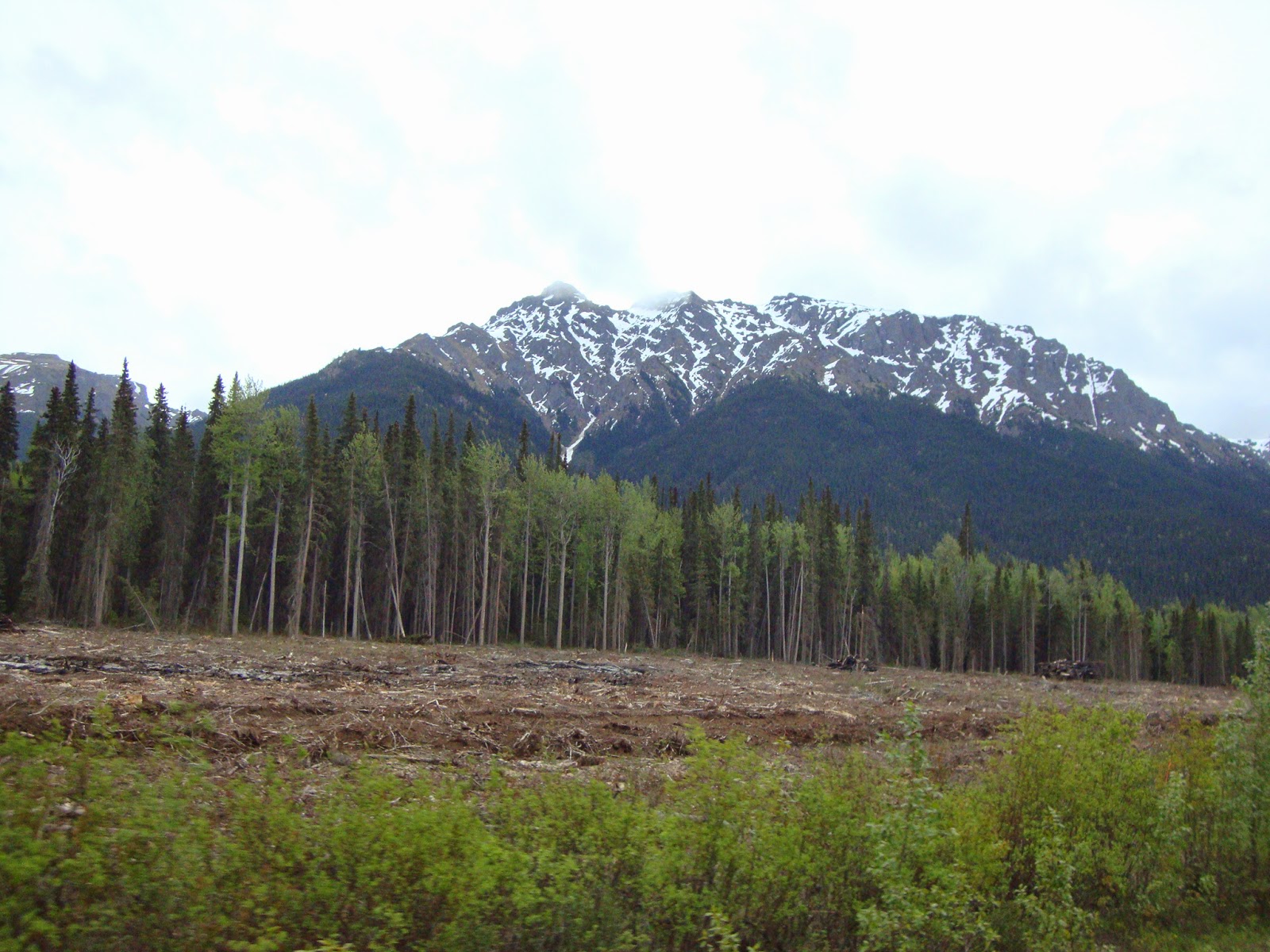 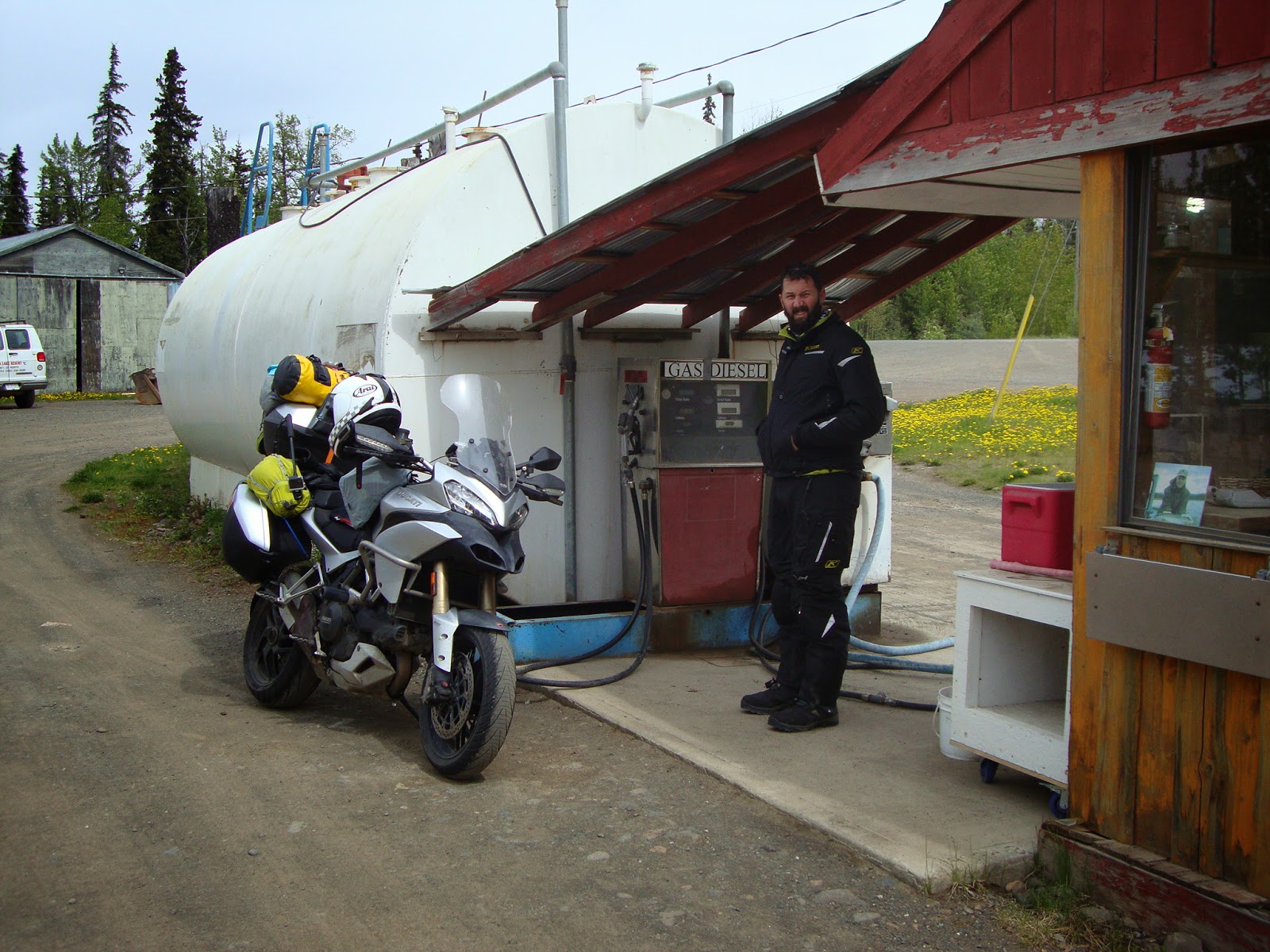 Grabbing fuel where we can 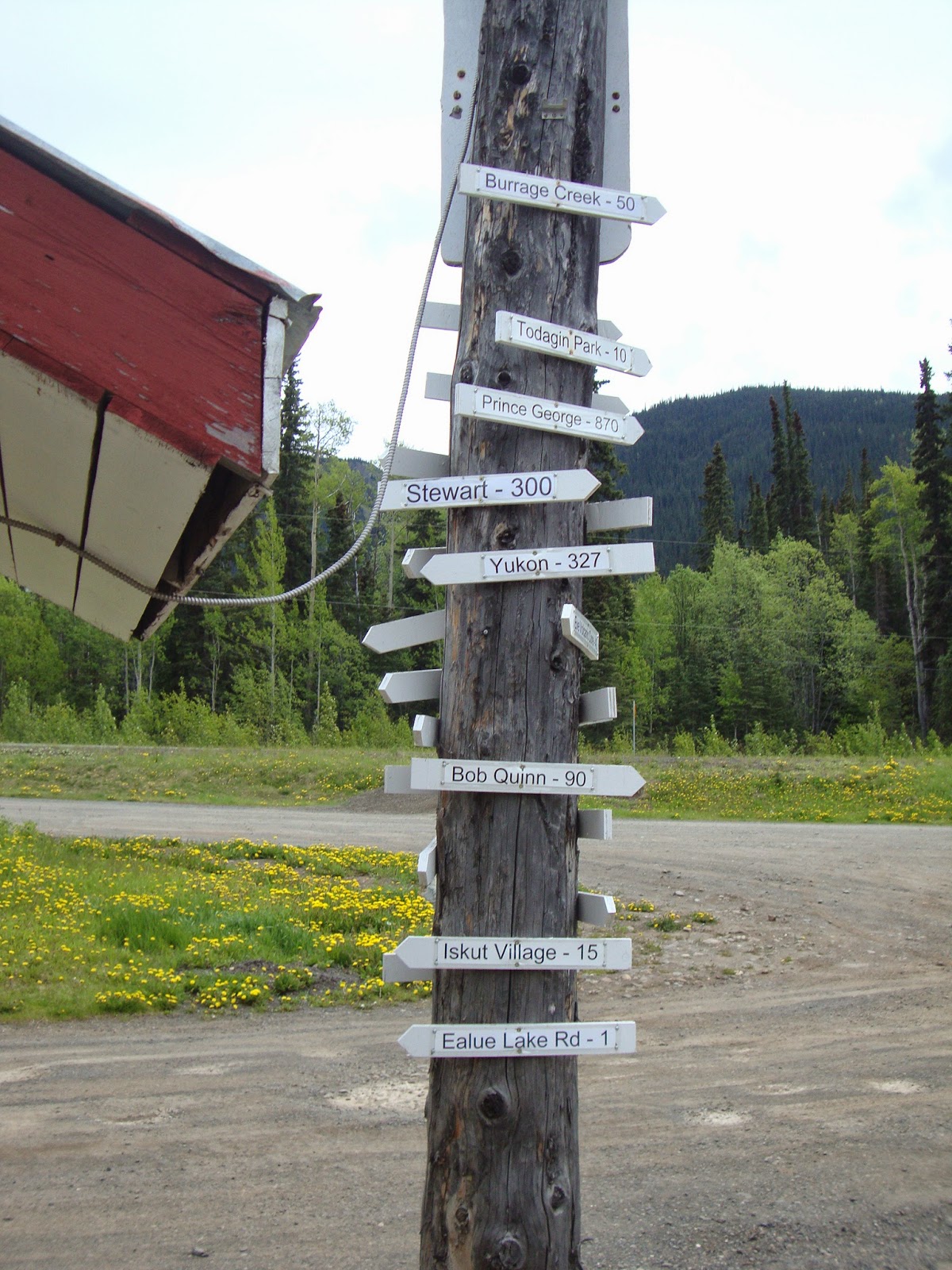 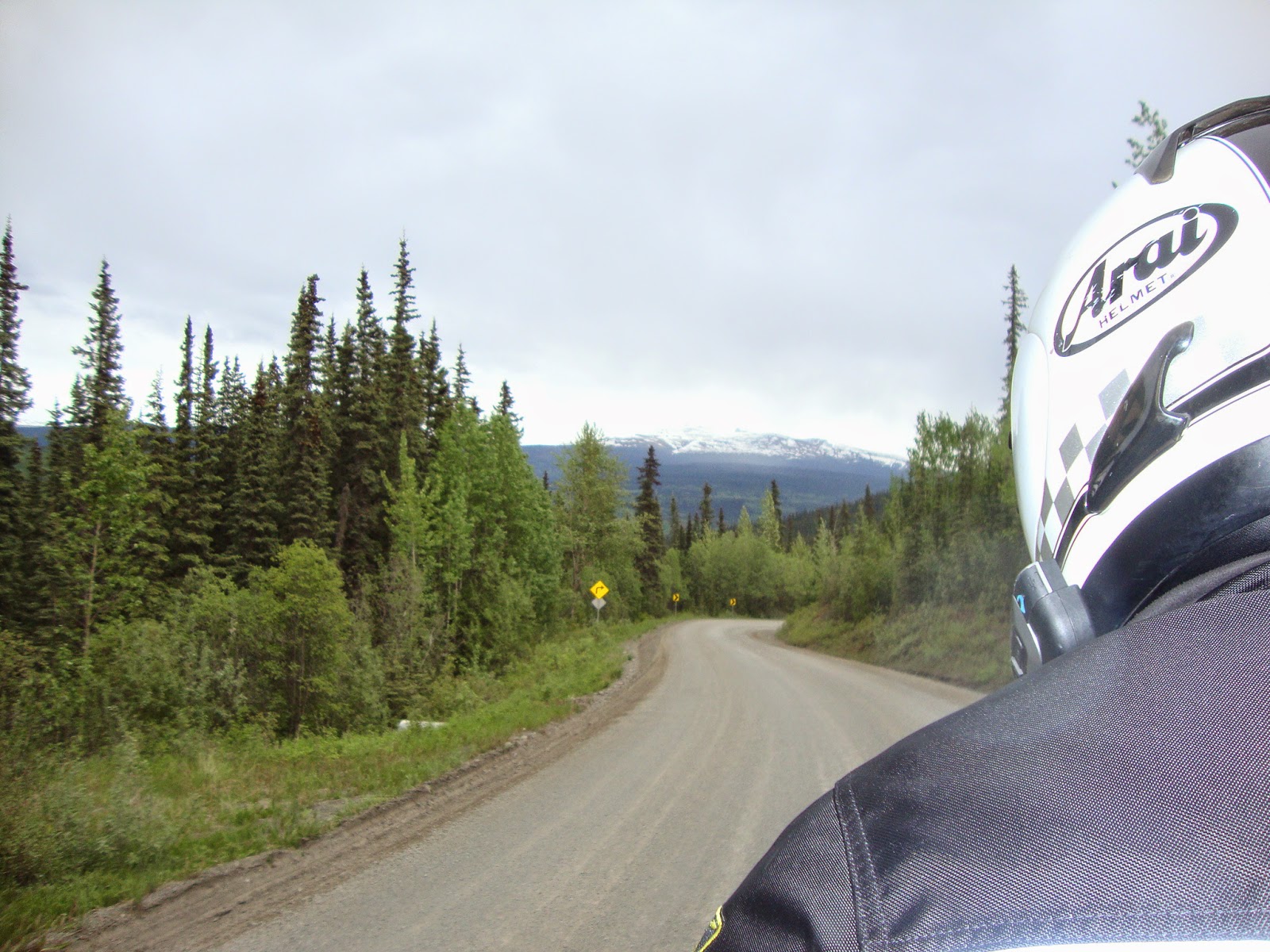 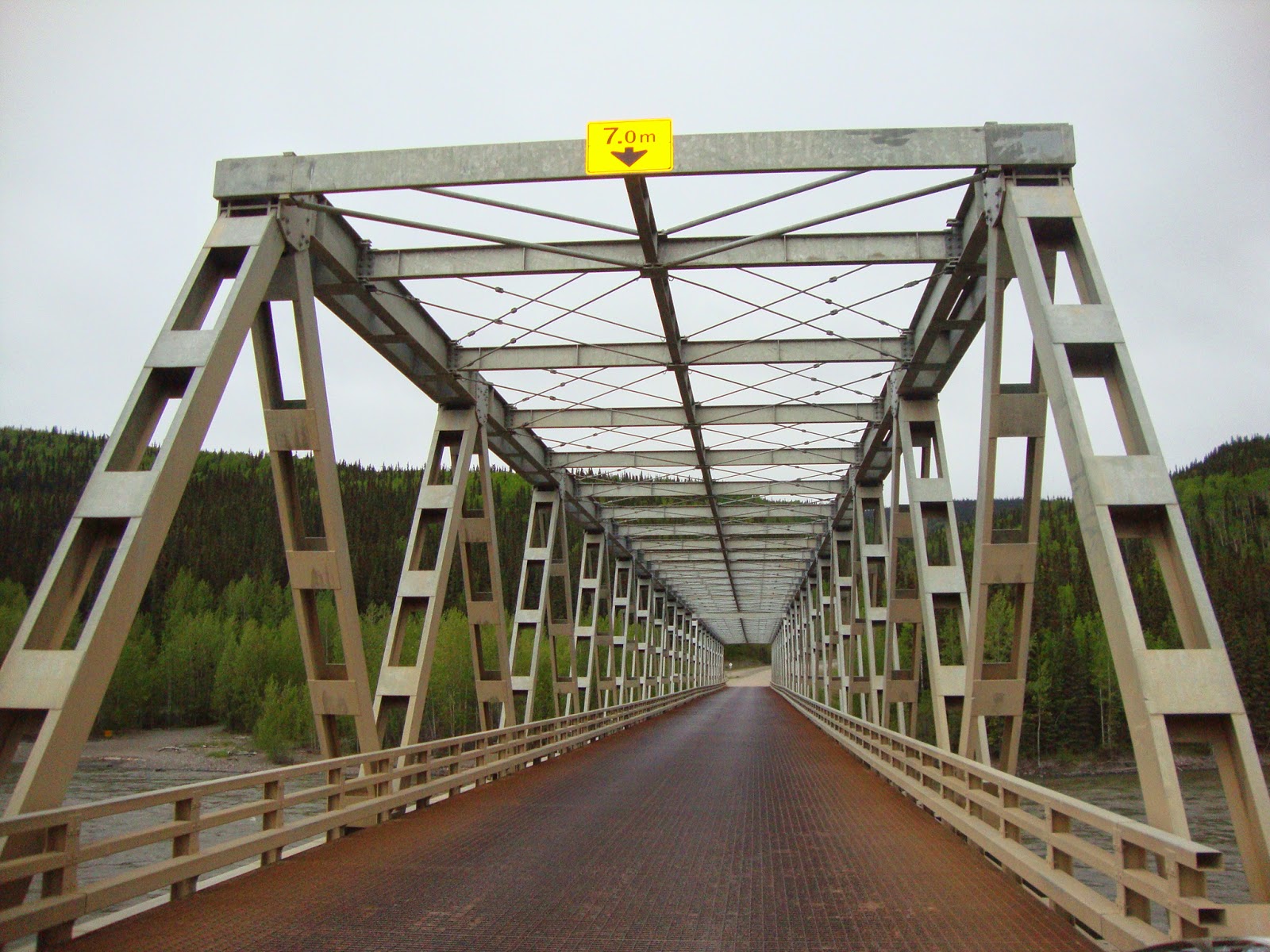 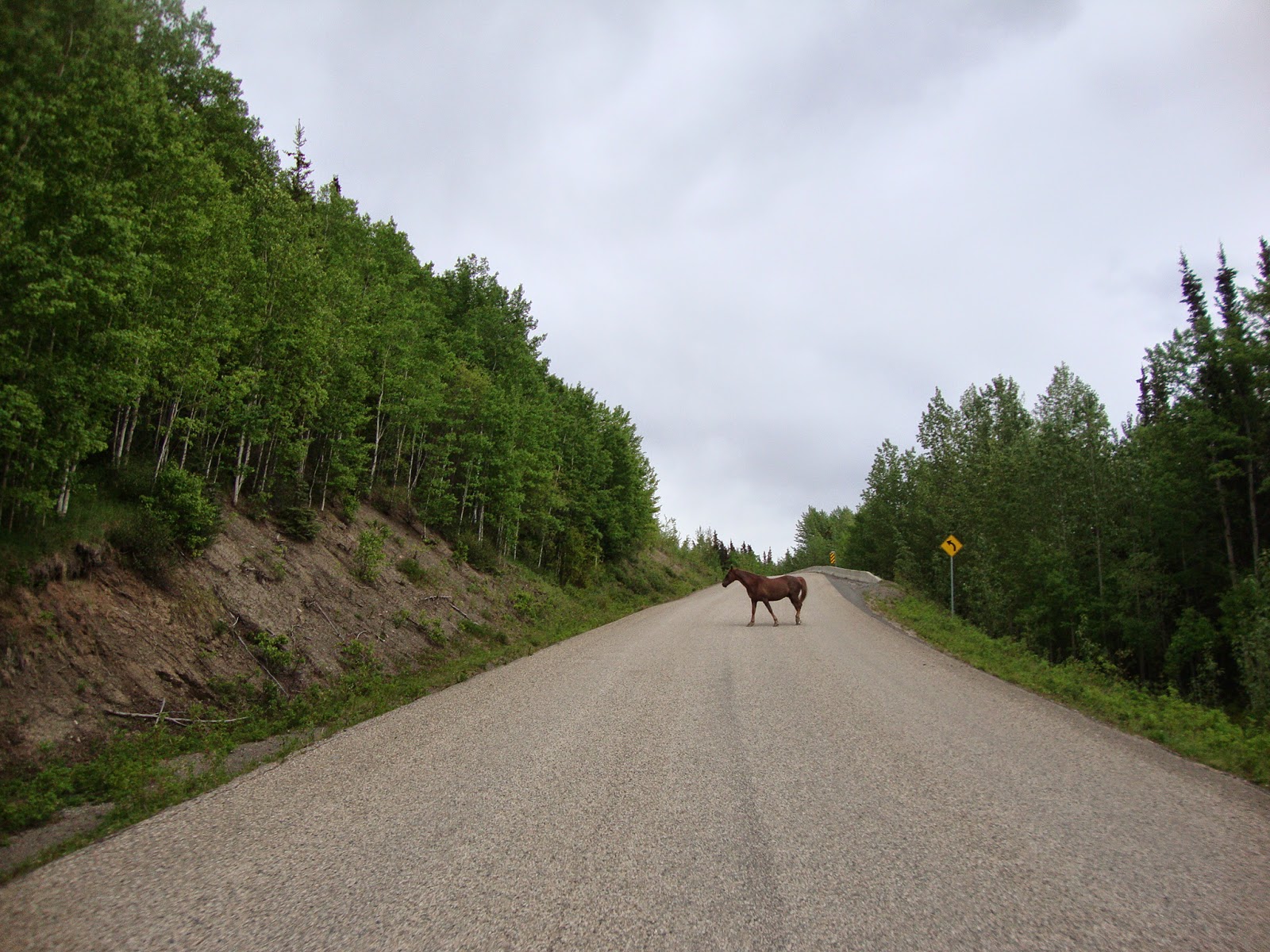 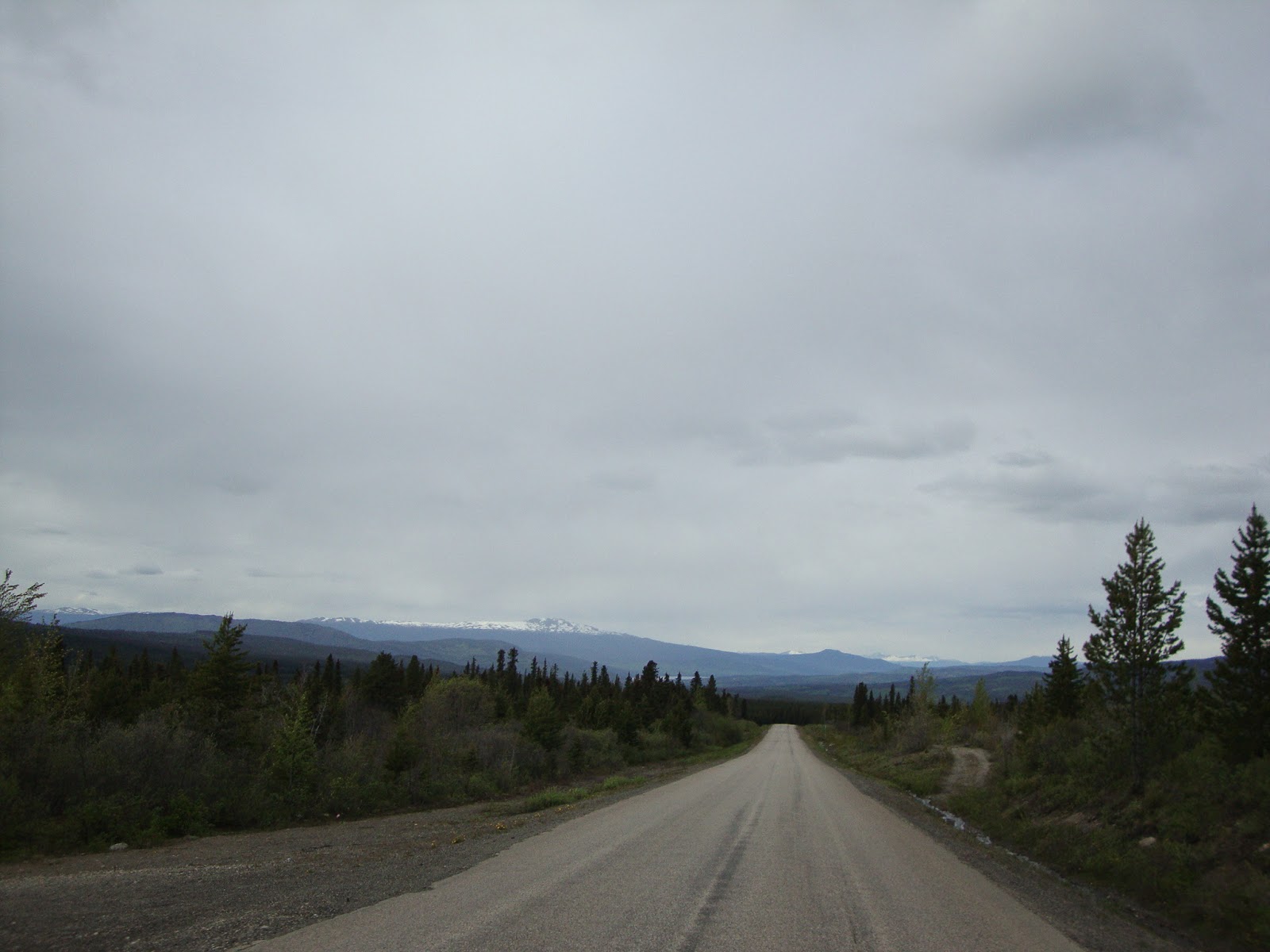 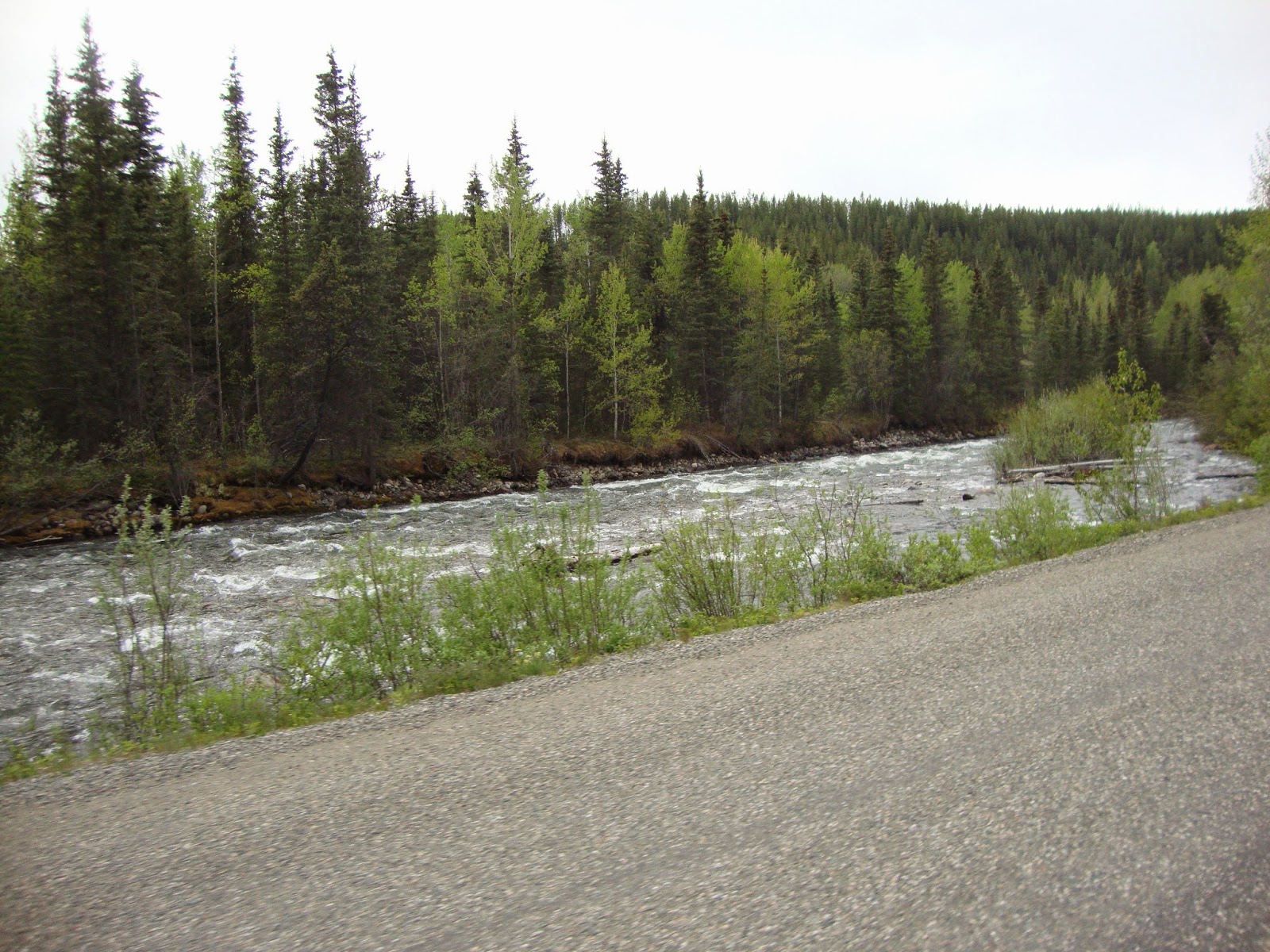 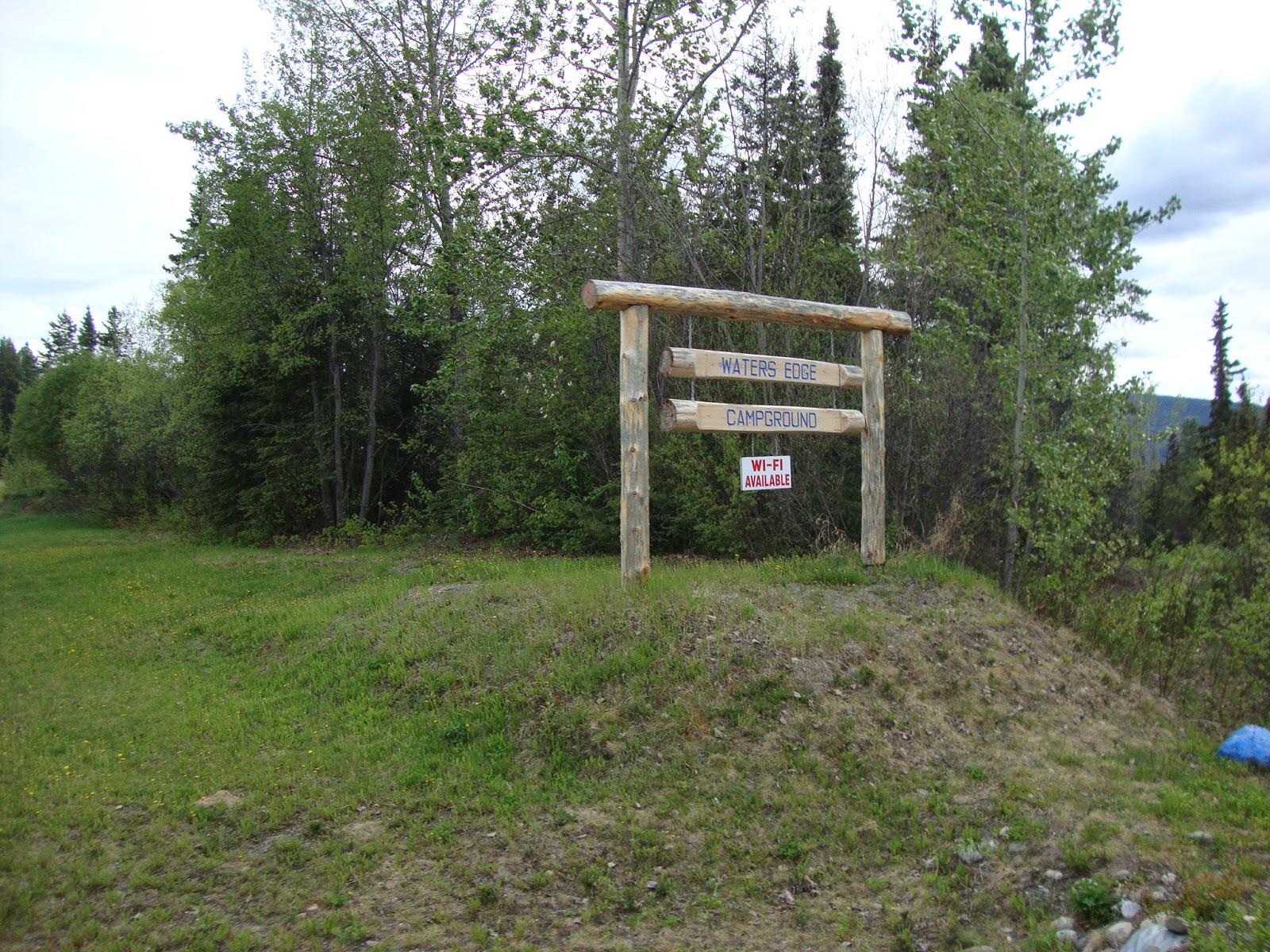 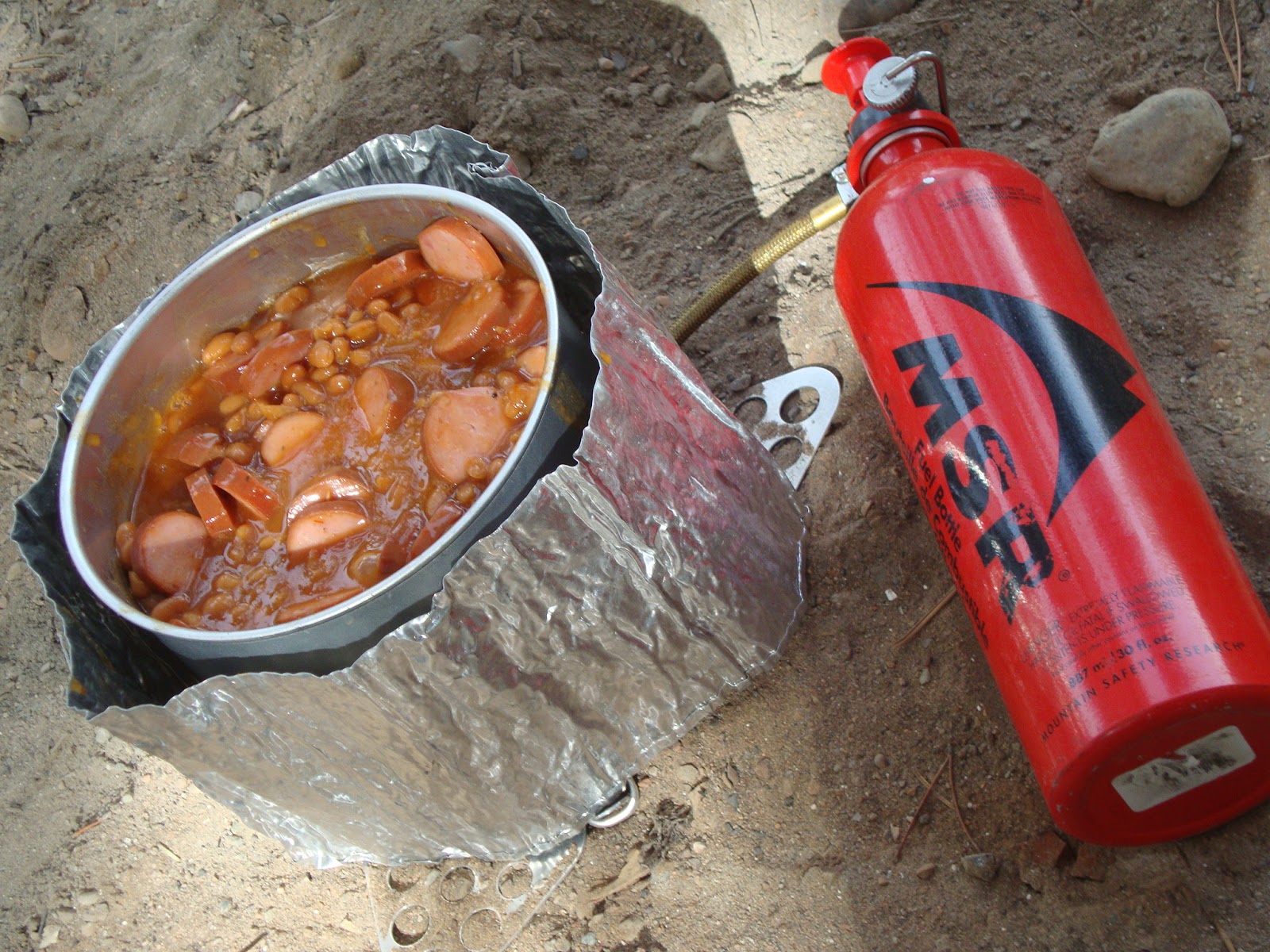 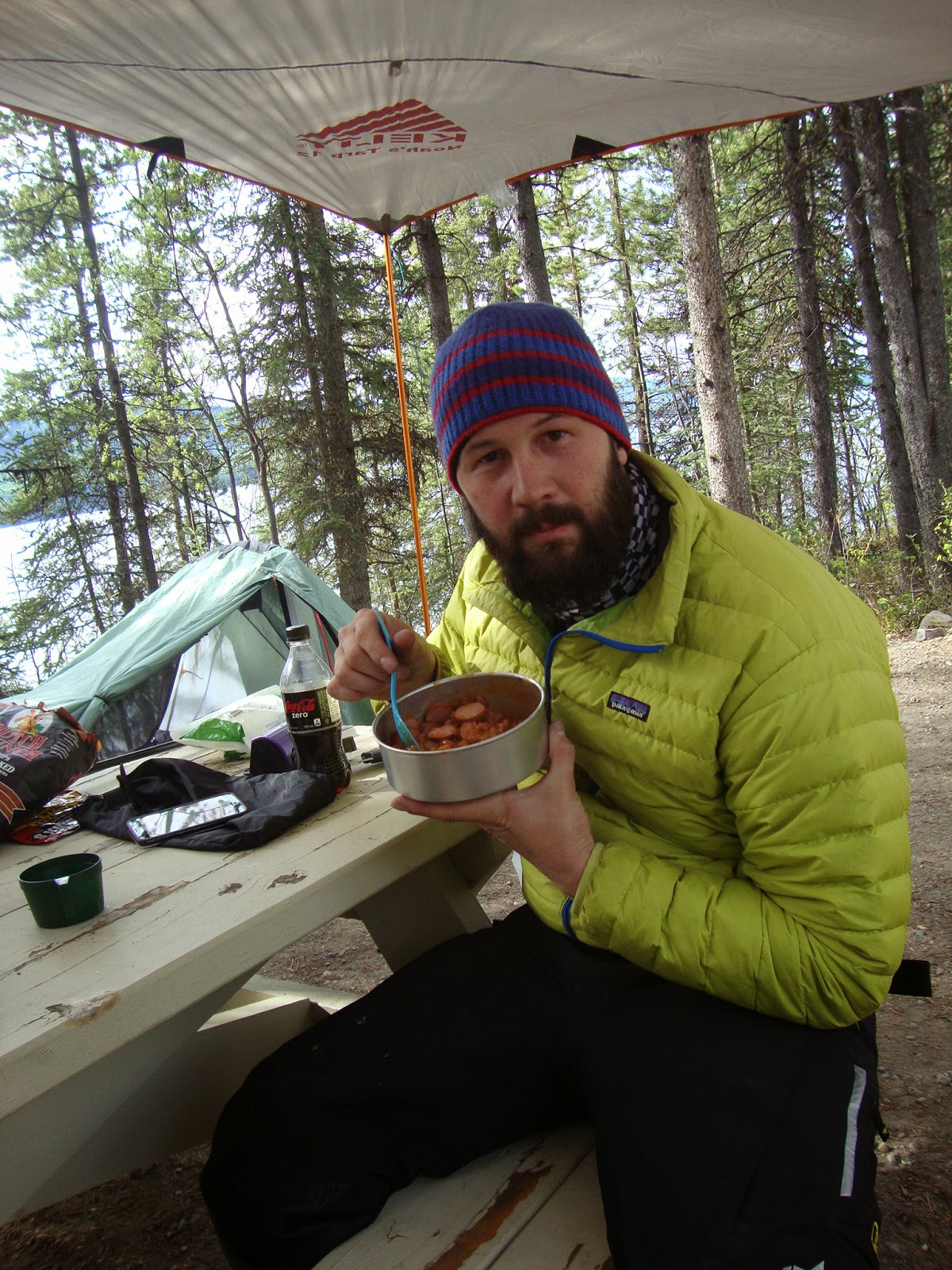 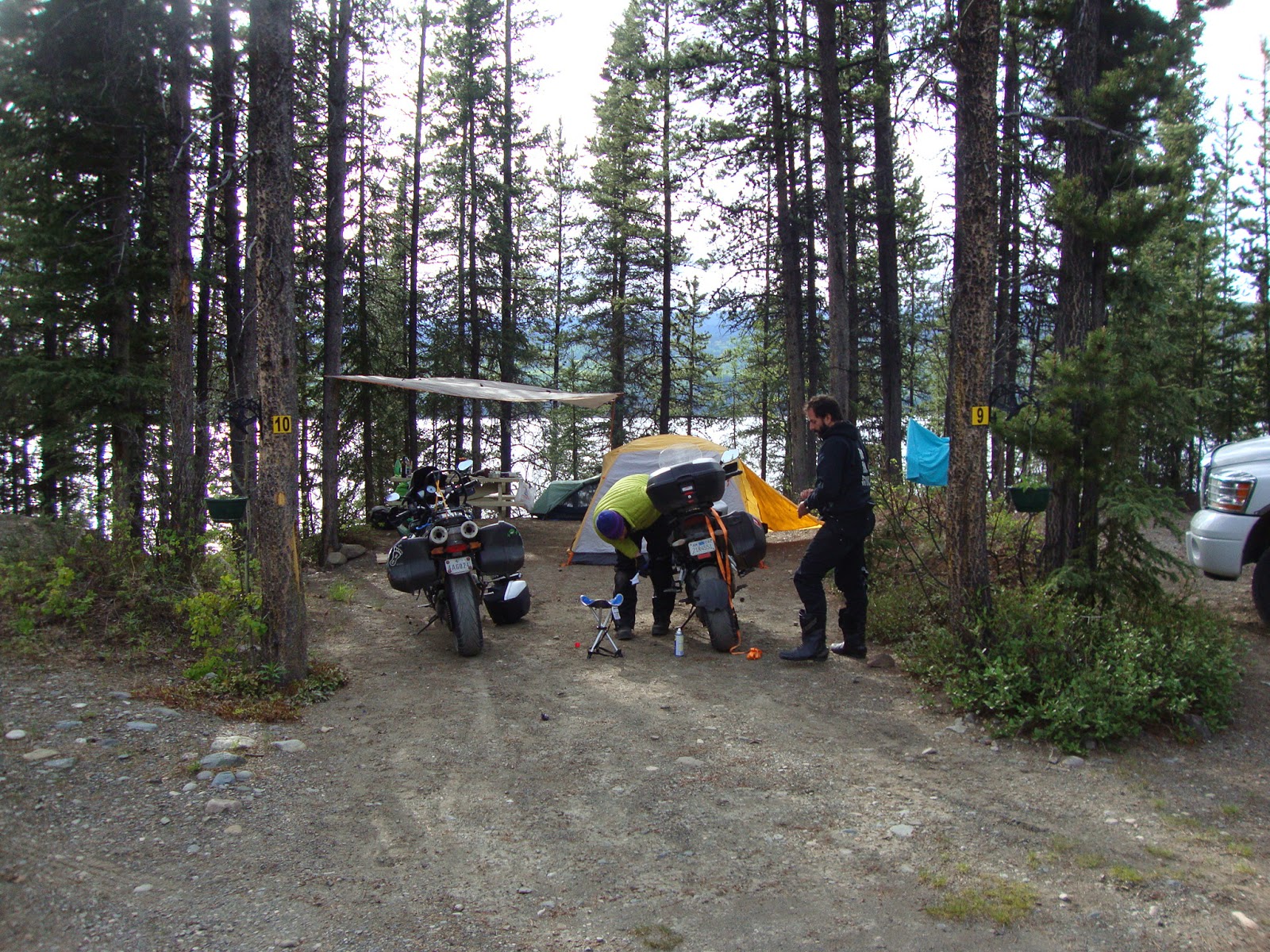 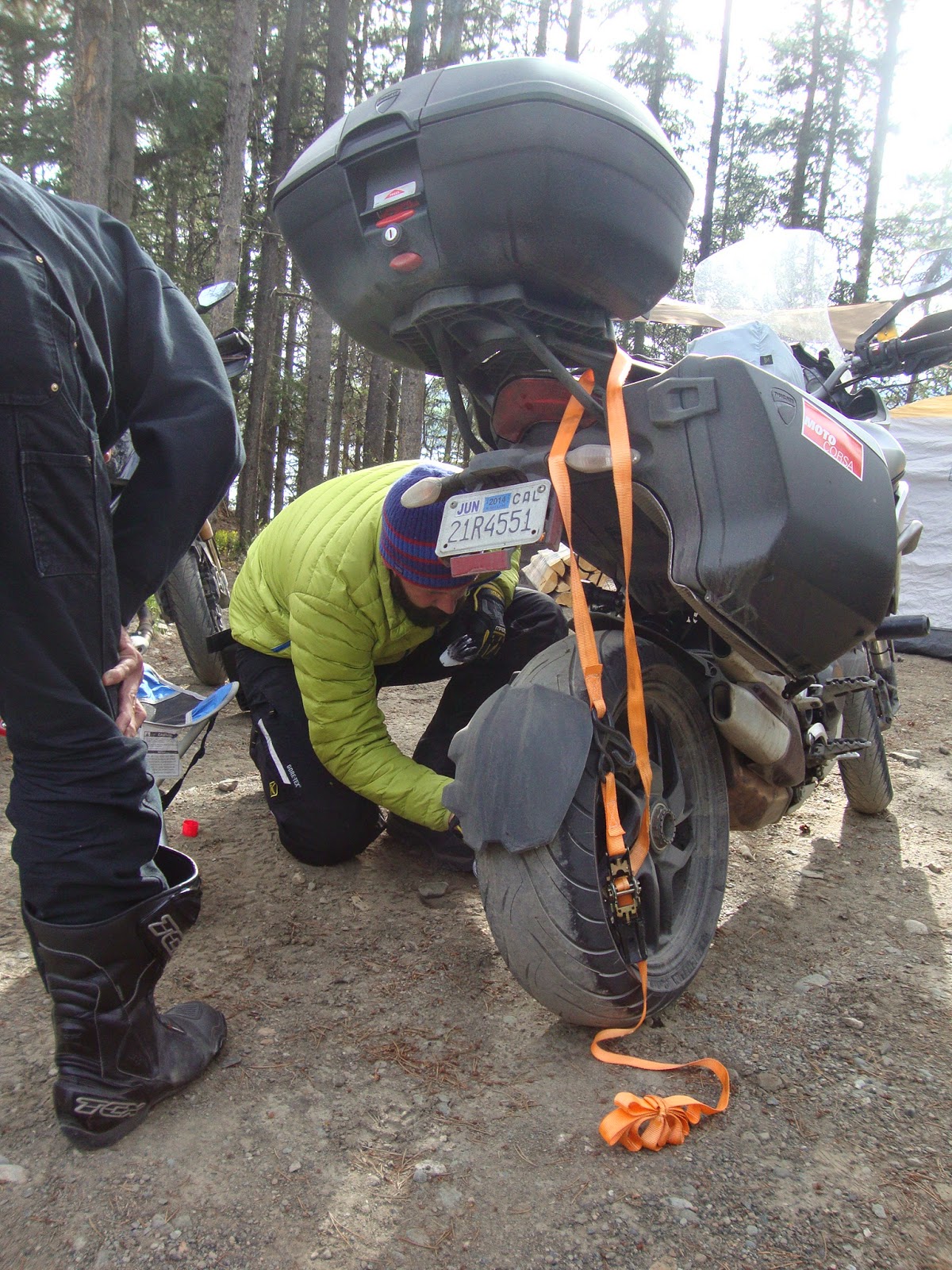 Rick decided that he was tiered of breathing our exhaust, so he took off and told us to meet him in Dease Lake.  Dan and I took our time riding, taking photos, and enjoying the scenes.  We crossed some pretty crazy bridges made of wood and gravel sections of road that made Dan a little nervous, but as a passenger, I didn’t even notice that he wavered.  After crossing a pretty amazing river on a gorgeous old bridge, we came across several large mounds of animal droppings.  We were pretty nervous as to what we were about to encounter and as we rounded a corner we were met with a wild horse! Rick, who was about 45 minutes ahead of us, said that he saw several of the wild horses! Amazing….I know I am exhausting this adjective!

We then arrived in Dease Lake and met Rick at the local grocery store and gas station.  Upon the advice of one of the locals, Ms. Margaret, we decided to grab some groceries and a camping spot at Water’s Edge Campground.  Margaret was a local of Dease Lake, and sat outside and spoke with us for a while.  She has had a stroke, and was a bit hard to understand, but has some really interesting facts about Dease Lake.  She told us that Dease Lake is a community of 400 and also that the local schoolteachers are on strike and so the kids are running “rampant”! Her campsite recommendation was perfect, and we pulled into Water’s Edge to meet Mr. Phillips, the owner of the campground.  He is a sweet old man who spends his summers here in Dease Lake and his winters in Palm Springs! What a life! We bought a lake front campsite for $20.00 and some firewood for $10.00 and settled in to make our beanie-weanies and broke open the red wine and whisky! We are currently chatting it up with the “neighbors” and comparing our travels. Another great day in the books.
Posted by Unknown at 8:29 PM 3 comments: