Yeah, i'm baccckkkk.  The bear is sleeping, and you know what they say about poking a sleeping bear!  So let's get rockin where she left off.

Day 9 was from Dease Lake to Whitehorse, 410 miles.  We crossed over into the Yukon Territory finally, out of B.C.  I would love to tell you it was eventful, but it was fairly uneventful.  More Rain, more middle of nowhere.  Here's the map from our route yesterday. 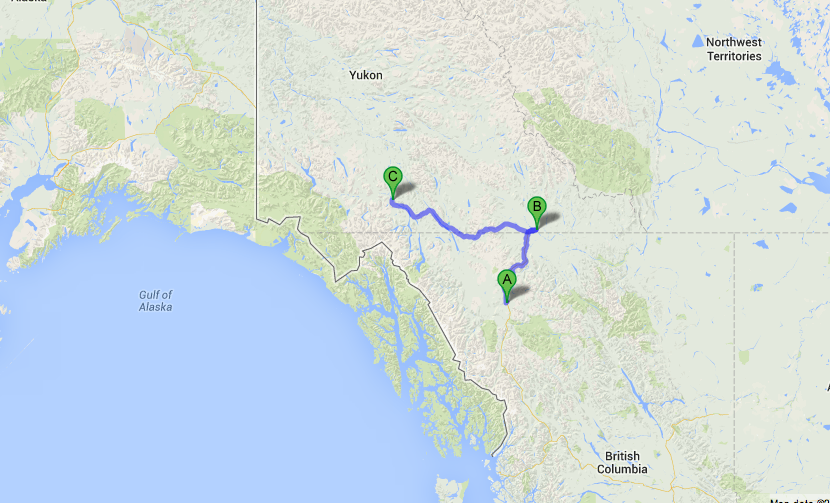 First off, it has been raining the past 2 days.  Not awful, but pretty consistant and it's pretty wet.

During the ride, Rick kept mentioning "Jade".   After hearing him talk about Jade for a few days, I finally asked him who the hell Jade was?  If she lived in the middle nowhere in B.C., I knew she was deffinatly a mountain woman.  Turns out, Jade is actually a stone that is found 20 miles south of Jade City in B.C.  This "City" has a population of about 20 people, all who basically work in Jade City.  We ventured in, looked at some cool stones, talked to the girls inside and picked up a few small things.  Turns out, they are currently filming a reality show about Jade City and the production of Jade stones.  Great, can't wait until Amandas TV schedule consists of Real Housewives, Buying Alaska, Greys Anatomy, Nashville, HGTV, and Jade TV. 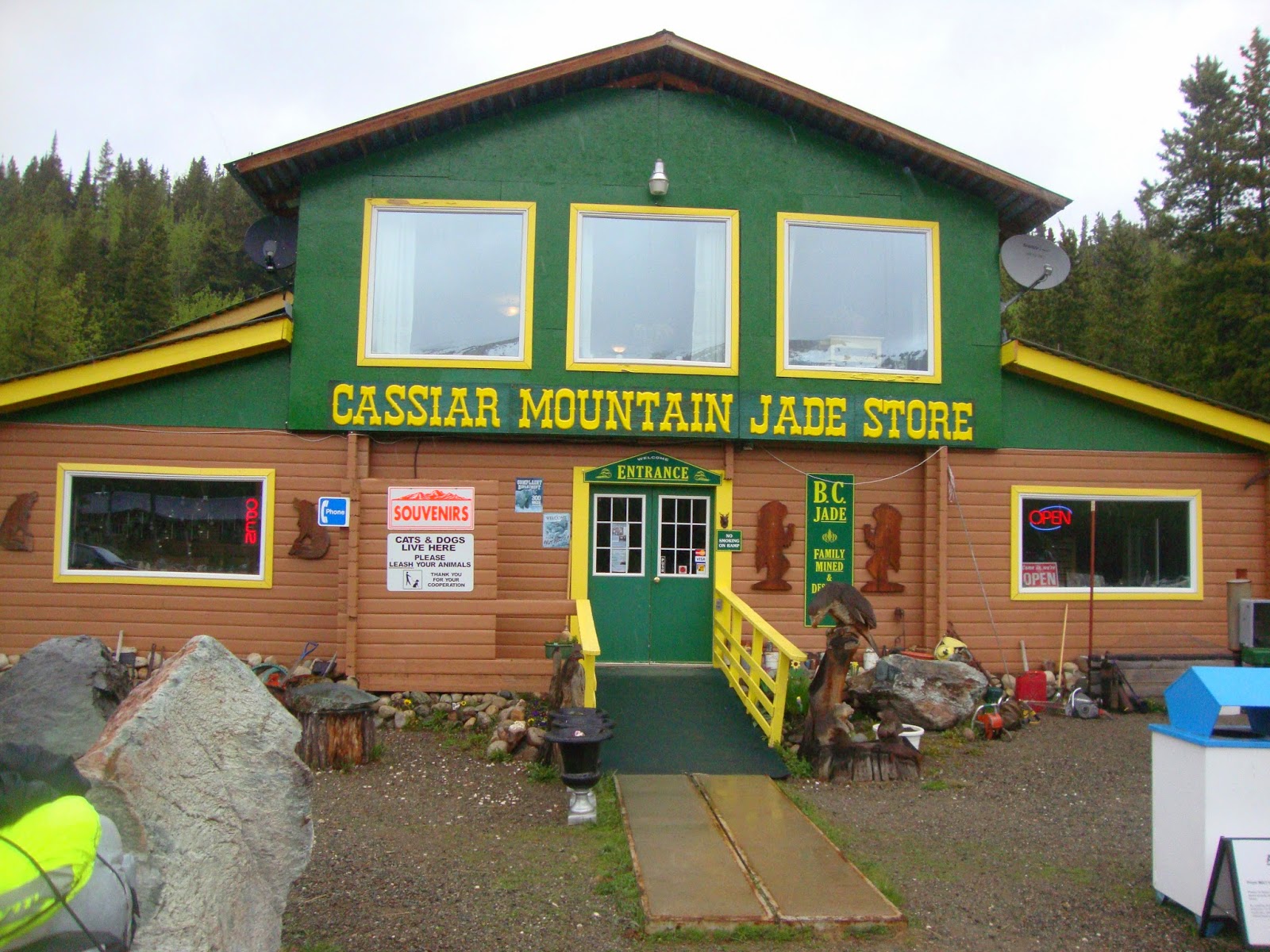 Quite a few miles down then road, when we hit the Yukon, we were super stoked!  Do you know what the Yukon actually is?  I doubt it. Let me tell you.

From Wikipedia, the free encyclopedia 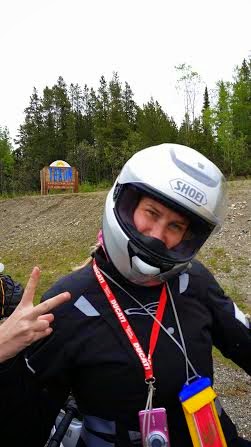 This article is about the Canadian territory. For other uses, see Yukon (disambiguation).
Yukon[3] /ˈjuːkɒn/ is the westernmost and smallest of Canada's three federal territories. Although it has the smallest land mass, Yukon has the largest population out of the three territories.Whitehorse is the territorial capital.


There you have it!  You didn't think I was actually going to type all that out did you?  Amanda probably would have... 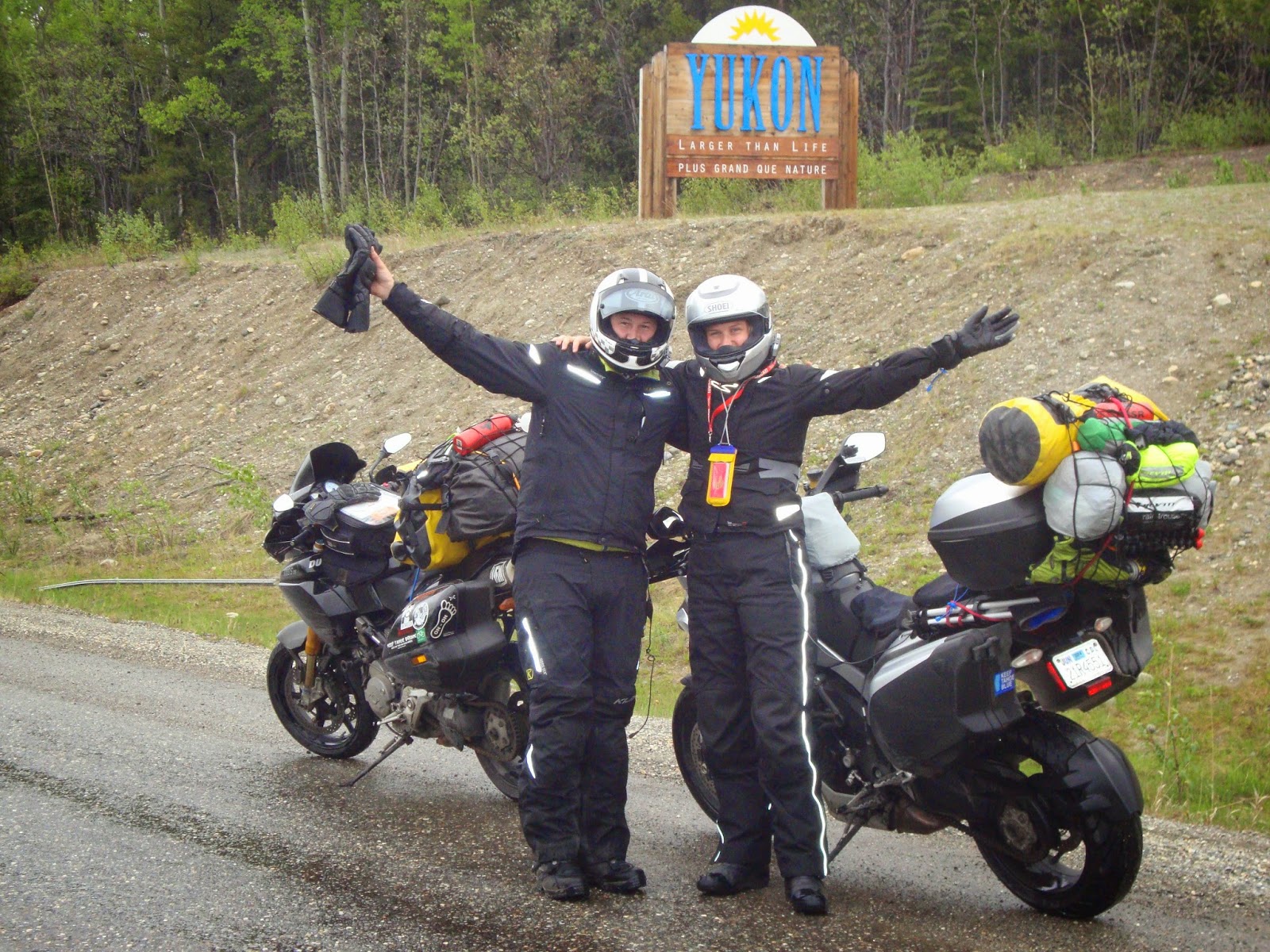 So in my terminology, the Yukon is in the middle of NOWHERE on the way to Alaska.  We hit this cool place called the Sign Post Forest.  What is that you ask?  Let me give you the Wikipedia definition!  Actually screw that, let me just show you some kick ass pictures that we took!


It's seriously been a long week of miles....And for some reason I'm always the first awake every AM. 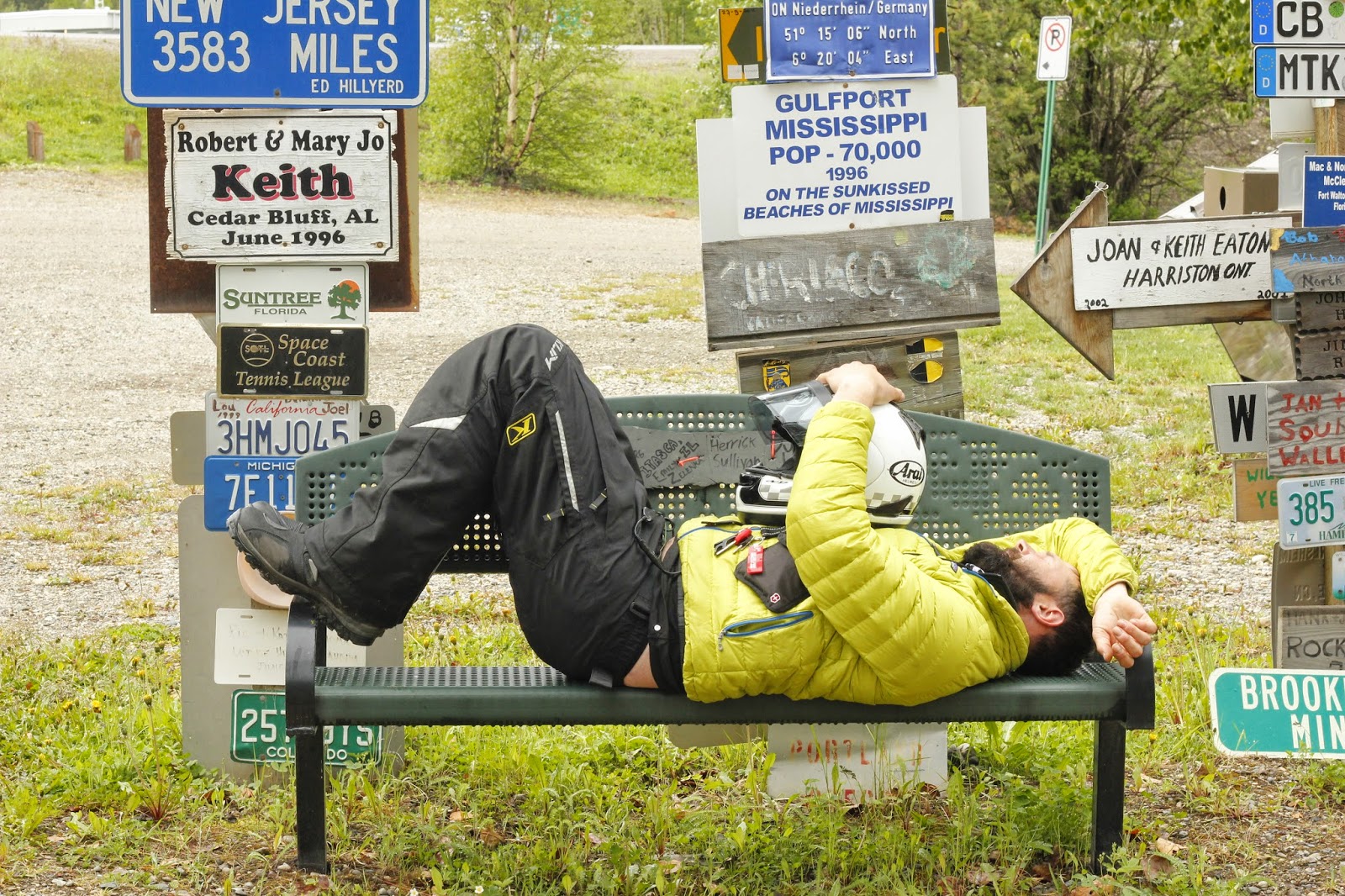 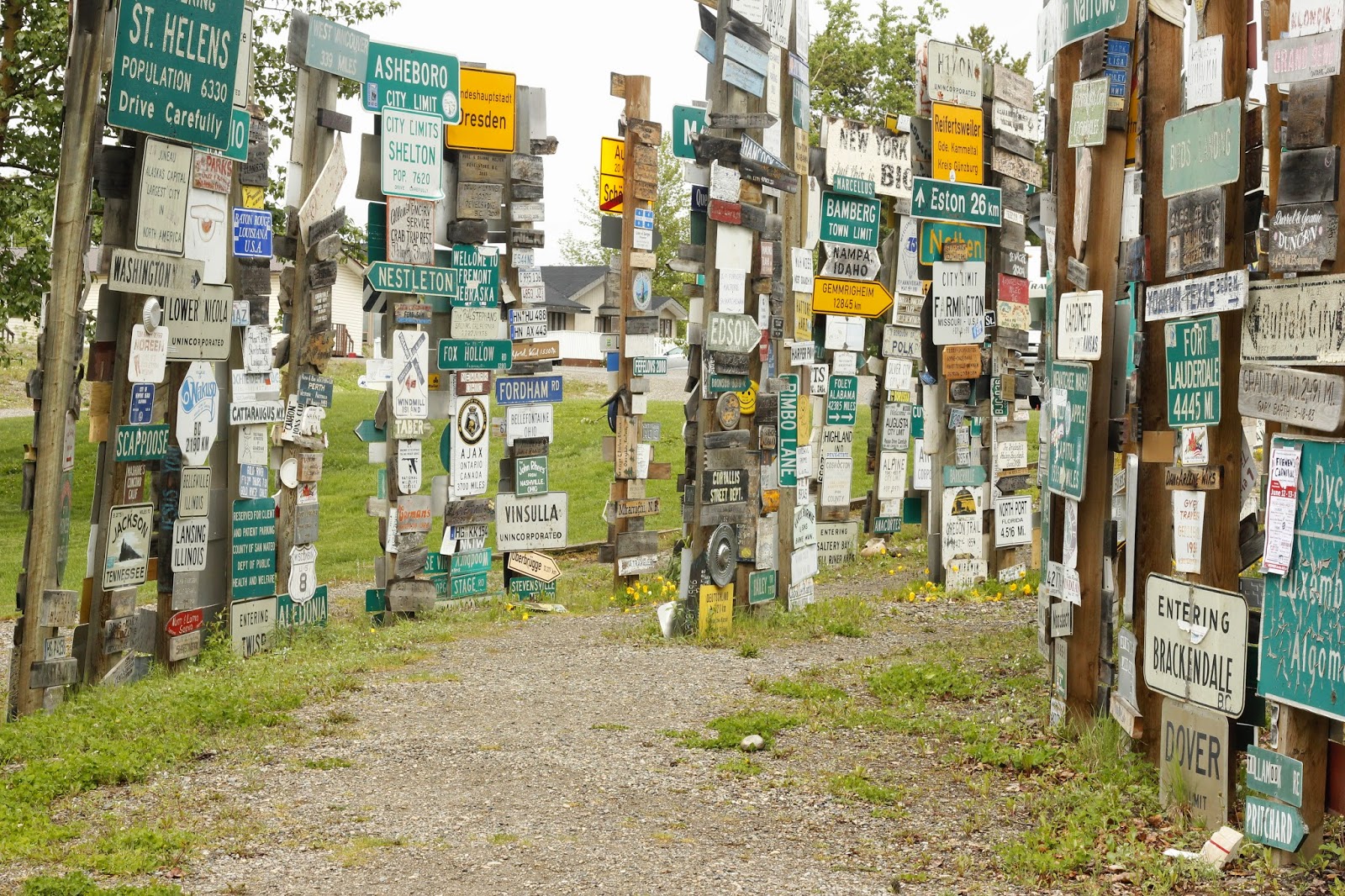 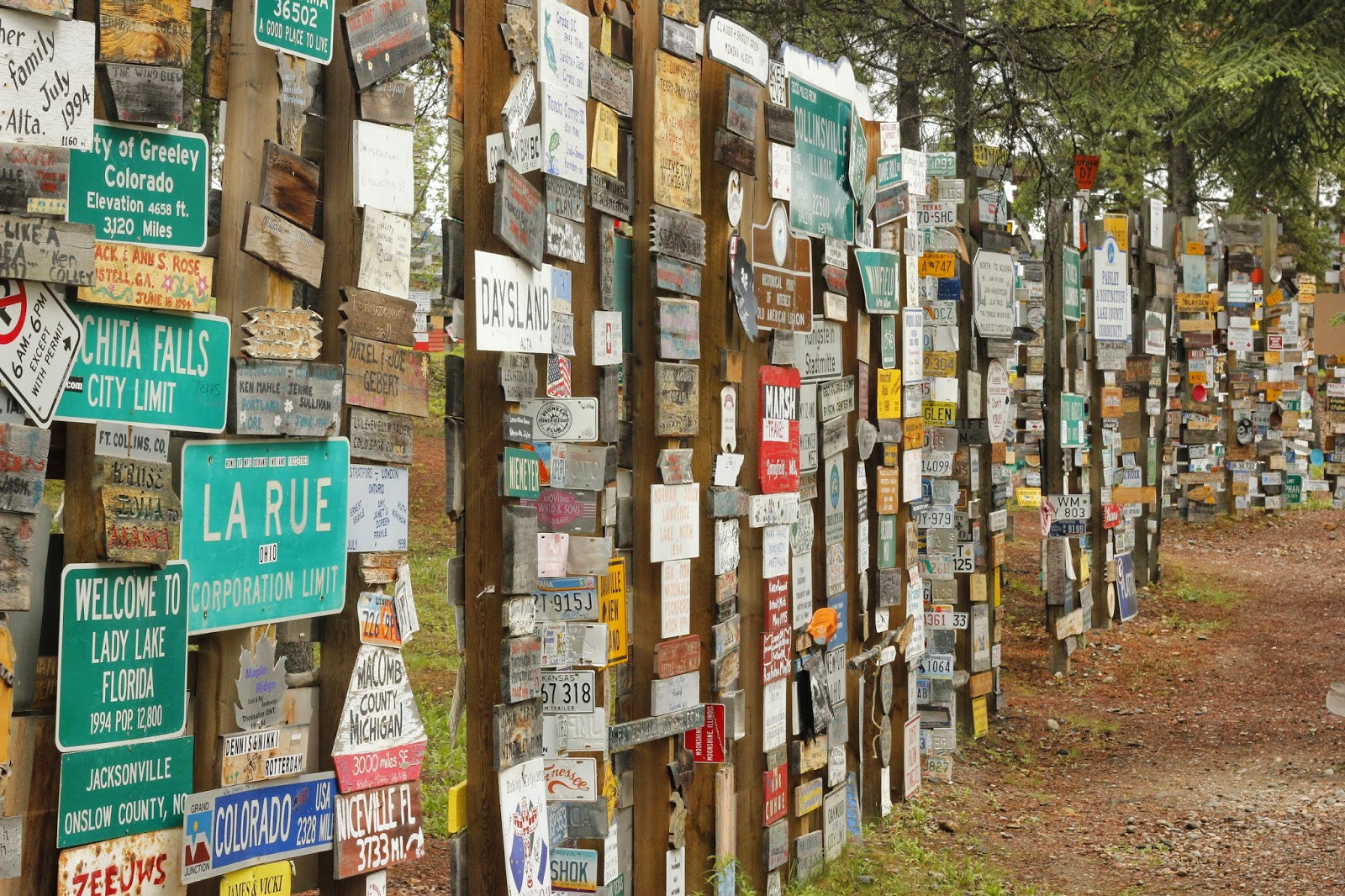 We promised Arun at Motocorsa in Portland we would show off the cool shirts that A.J. hooked us up with.  Rick never promised to do the Robot, but he sure did anyway.  Nice moves Rick, nice ass Amanda and nice belly shirt to me! 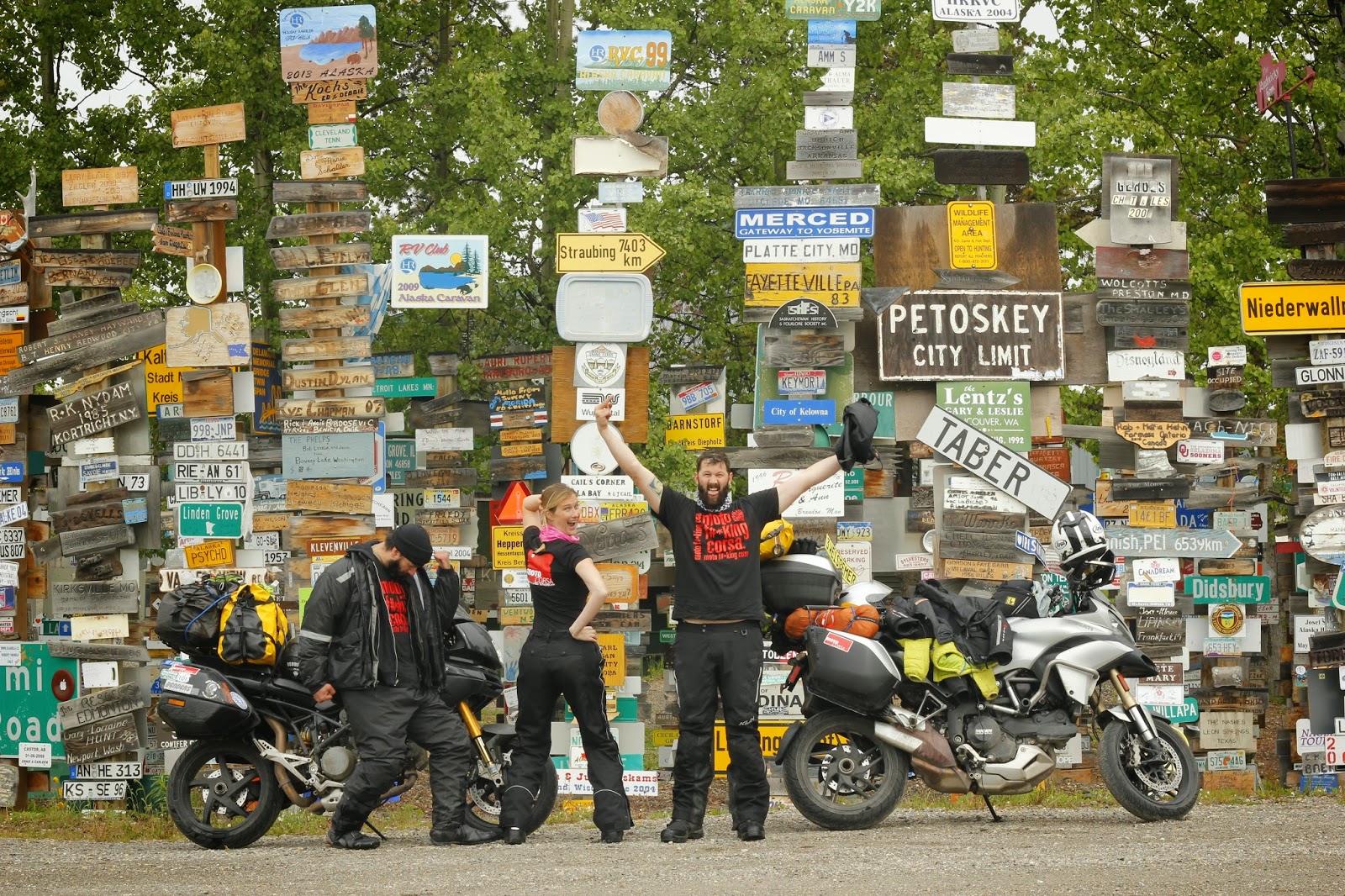 The first half of today was a lot of twisty, tight and wet roads through the middle of nowhere.  The second half was more highway, 120mph straight aways (which I never went above the speed limit on). We rolled into Whitehorse in the Yukon Territory and went over to this place to eat called Klondike.  I think amanda will tell you about this in a later post.  So finally we ran into some issues.  The issue being my rear tire.  It was losing tread and losing tread fast.  I needed a real tire, now.  Take a look at the picture.  This was from the day prior to this ride.  It's totally squared off and off to the left, I had no tread, it was actually concave.  It may look like it has tread in the picture, but it doesn't.  Sure makes it hard to turn.  The bike doesn't like to ride on that nub, but we have no choice for now. 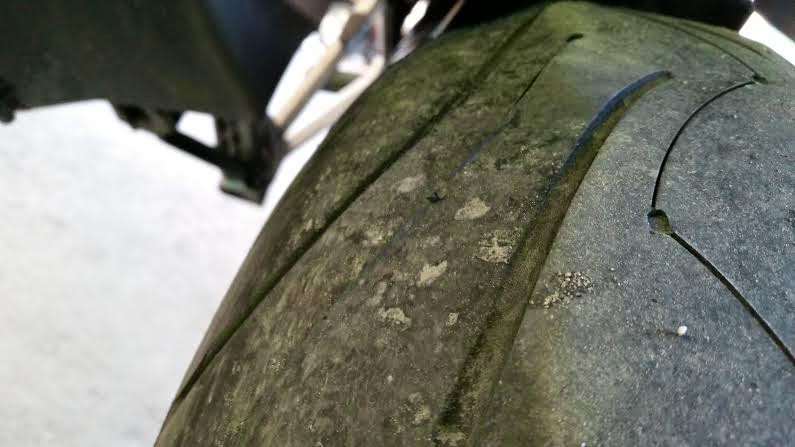 When we got to Whitehorse, the tire had absolutely no tread left to be seen, almost like a racing slick.  I didn't take any more pictures, because I was afraid to look at it and I didn't want to think about it.  I knew my only real chance to get a tire was the Ducati Shop in Anchorage.

Here's some other pictures from the day. 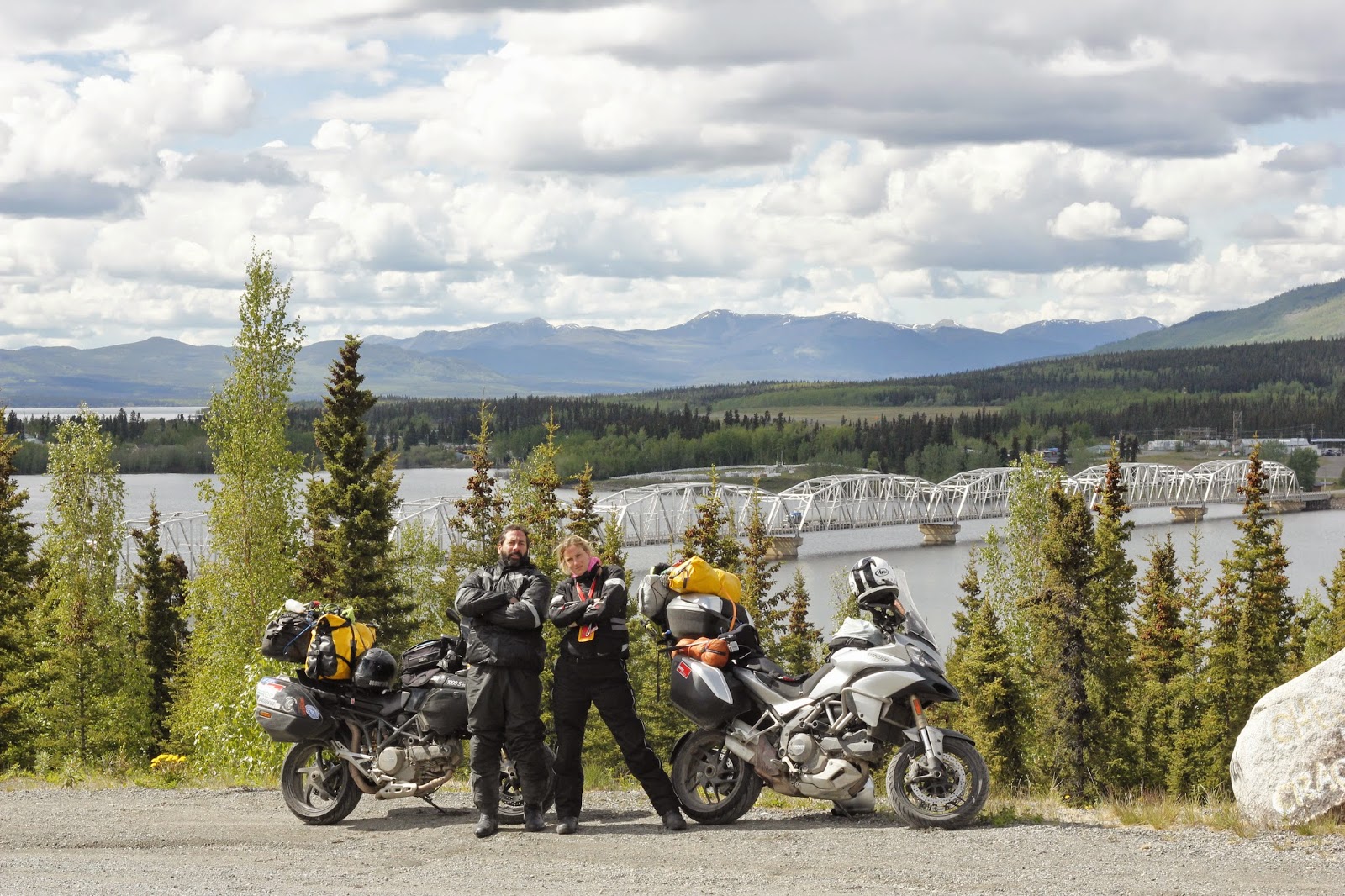 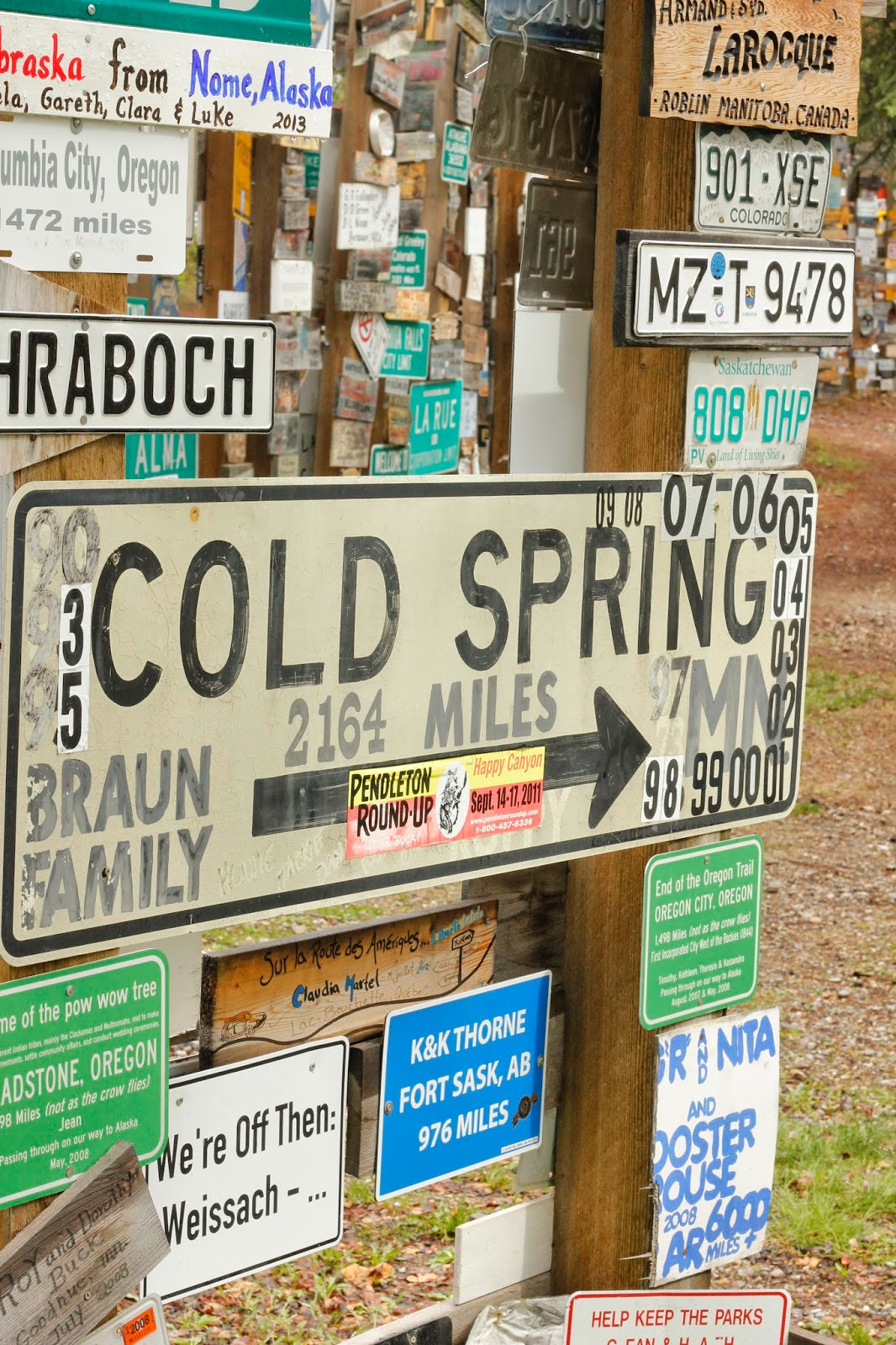 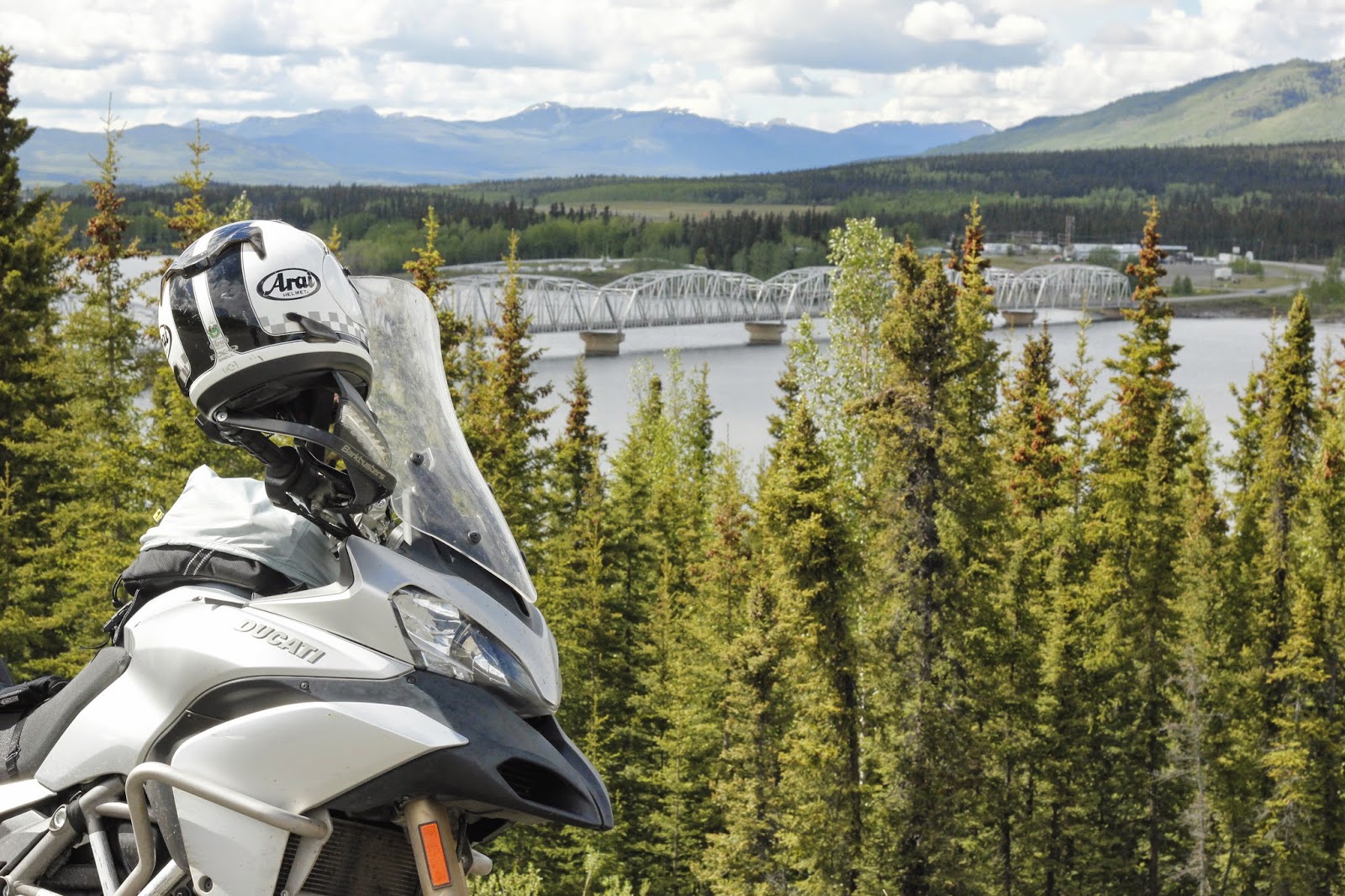