Amanda here….
No fancy innuendos of drug use to open today’s blog entry…sorry to disappoint.  However, I can brag a bit, as Dan and I lay here…in separate beds, of course Mom and Dad…gazing at the Space Needle in all her glory. Today was not a very exciting day on the motorcycle.  We (meaning I) slept in a little bit this morning before saying farewell to Morgan, Rick, and Riley and meeting up with Rick at Motocorsa.  I know Dan mentioned our pit stop by the exclusive Ducati dealer and shop, Motocorsa, yesterday evening, but I just wanted to reiterate how awesome these guys are! Everyone from the mechanics to the GM we super friendly and made us feel like rock-stars on our journey to Alaska!  Rick’s friend gave us an awesome send off this morning with some stickers that are now slapped on the moto side cases and some awesome Ducati Motocorsa t-shirts…be on the lookout for the three sexiest models you’ve ever seen as we rock those t-shirts along the way to Alaska.  We jumped on the interstate and drove like we stole something all the way into our 4th state in 5 days! We ended our short 2-hour jaunt in Bremerton, Washington where we boarded the ferry to cross the Pungent Sound into Seattle.  As we warmed up on the ferry, enjoying cafeteria grade hotdogs, hot pretzels, and coffee, we watched the Seattle skyline come into view.  We met another couple and their friend who rode up in their sassy leather upon gurgling Harleys.  They were excited to learn of our trip and had some great advice on how to best get north of Seattle and on our way through Canada.  One of the most awesome things about this trip so far is that we are meeting so many awesome people.  Whether it’s Dan’s cheerleaders on the ADV forum, you guys reading the blog, the guys at the motorcycle shop, the gas station attendants, or just random people, we have been so excited and lucky to feel supported and to share our journey along the way! 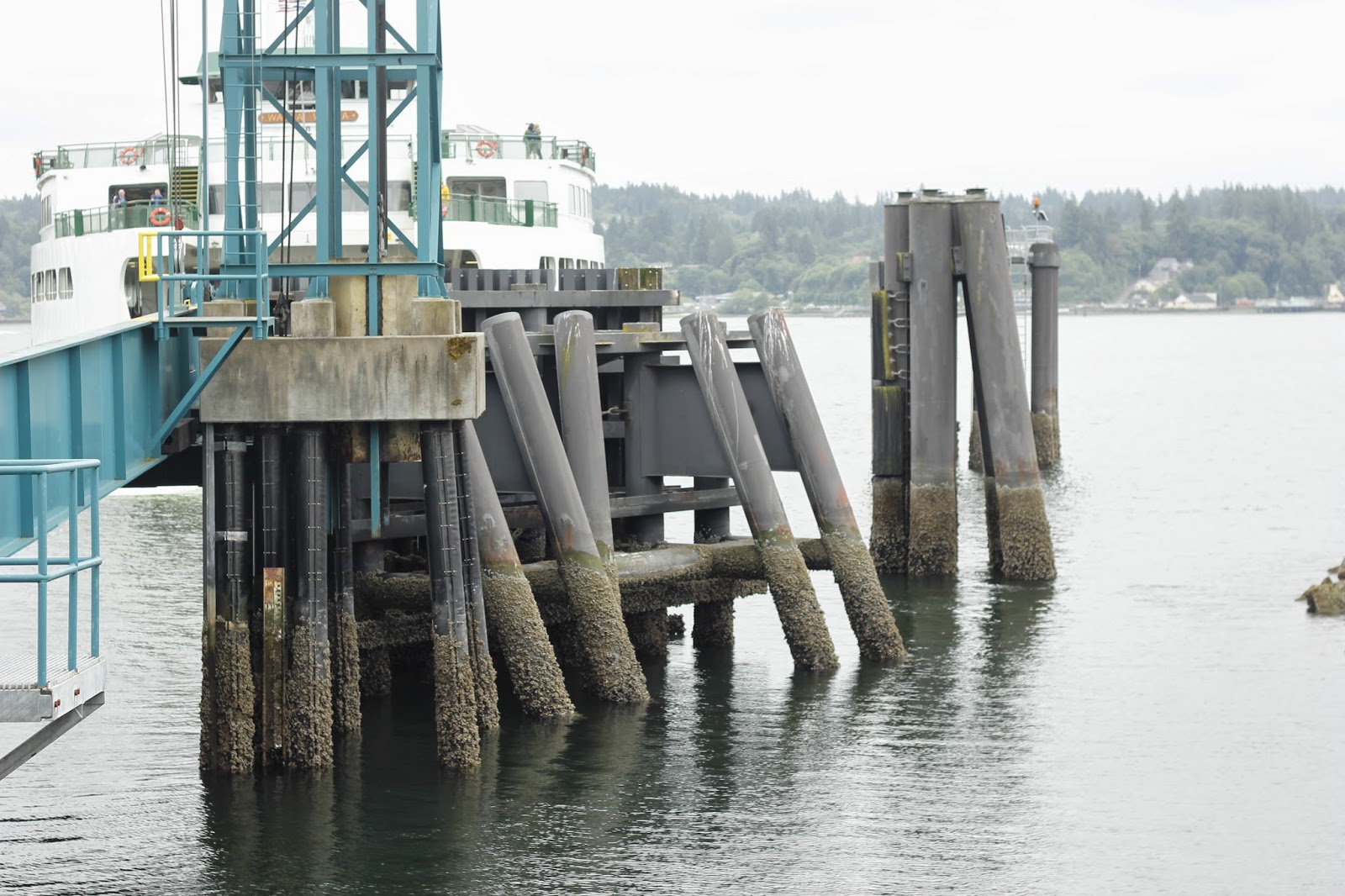 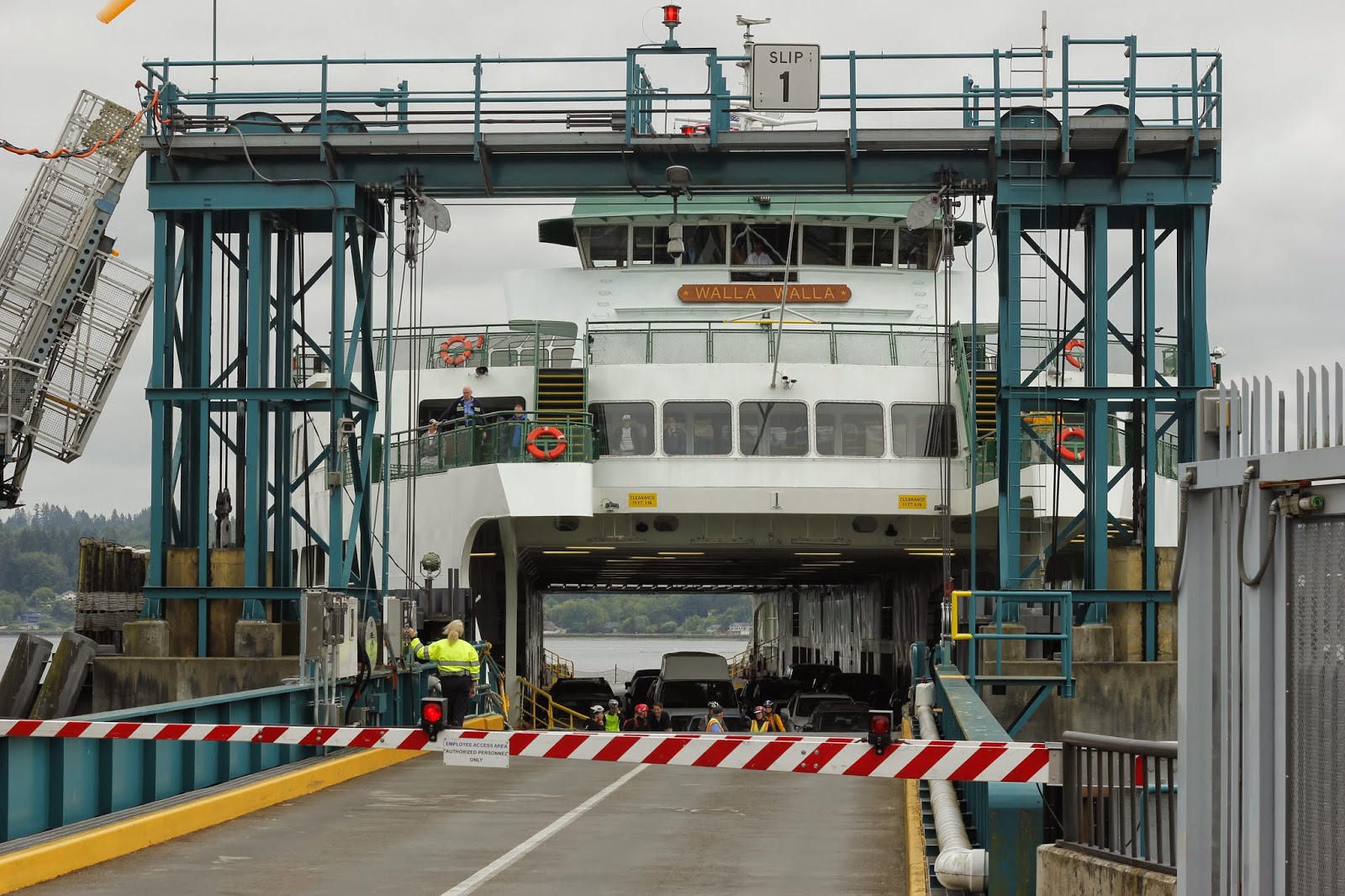 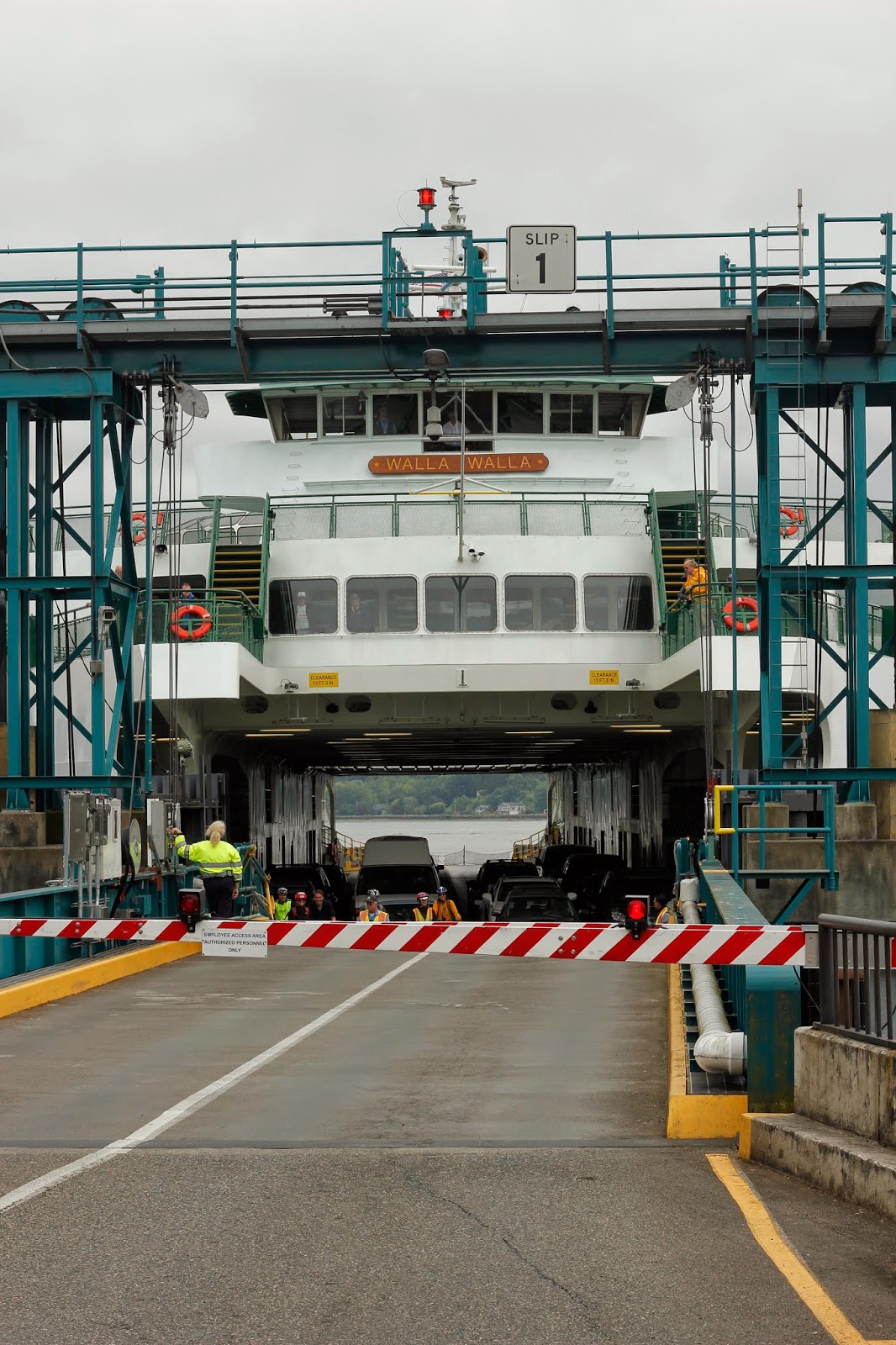 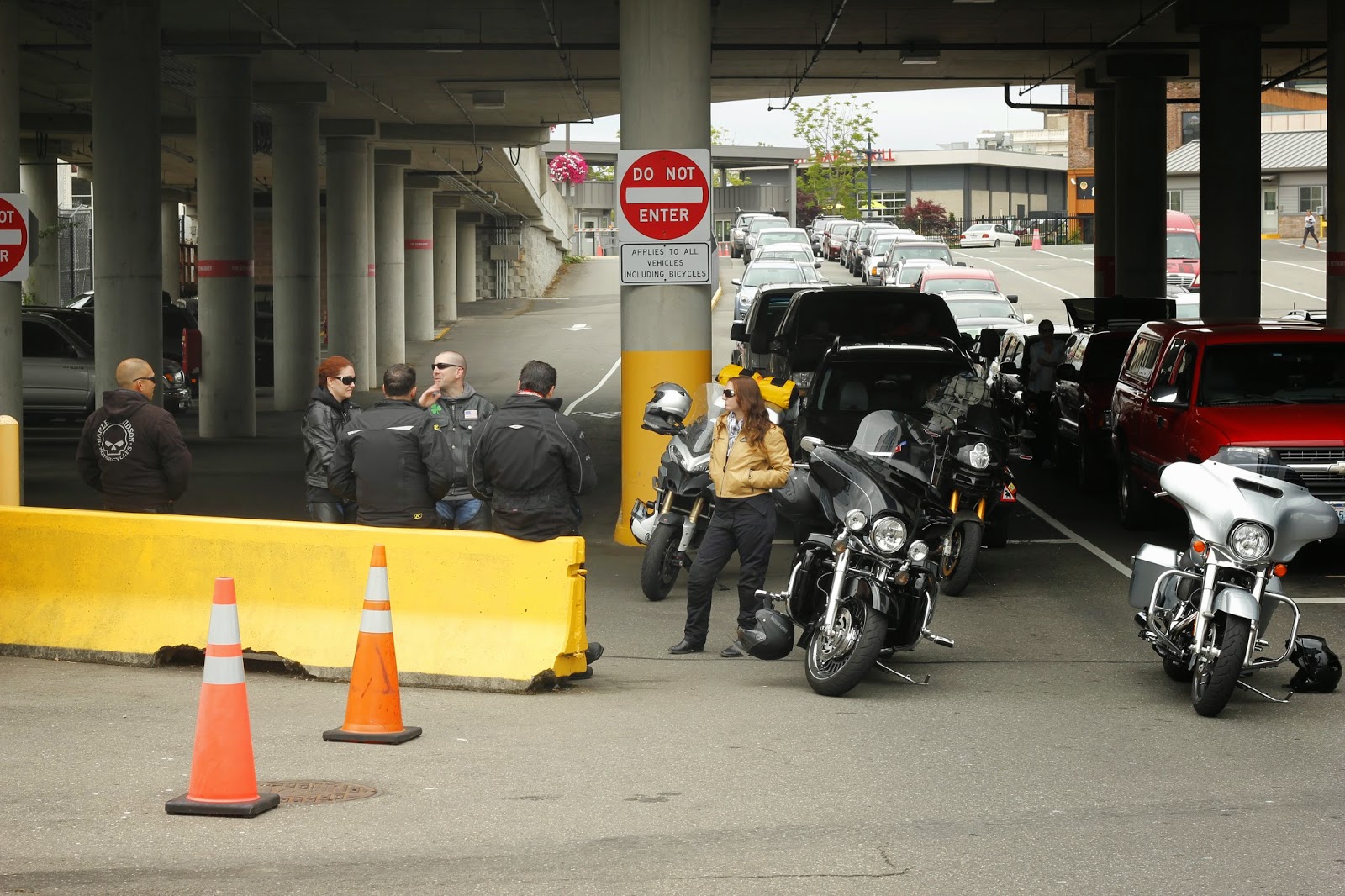 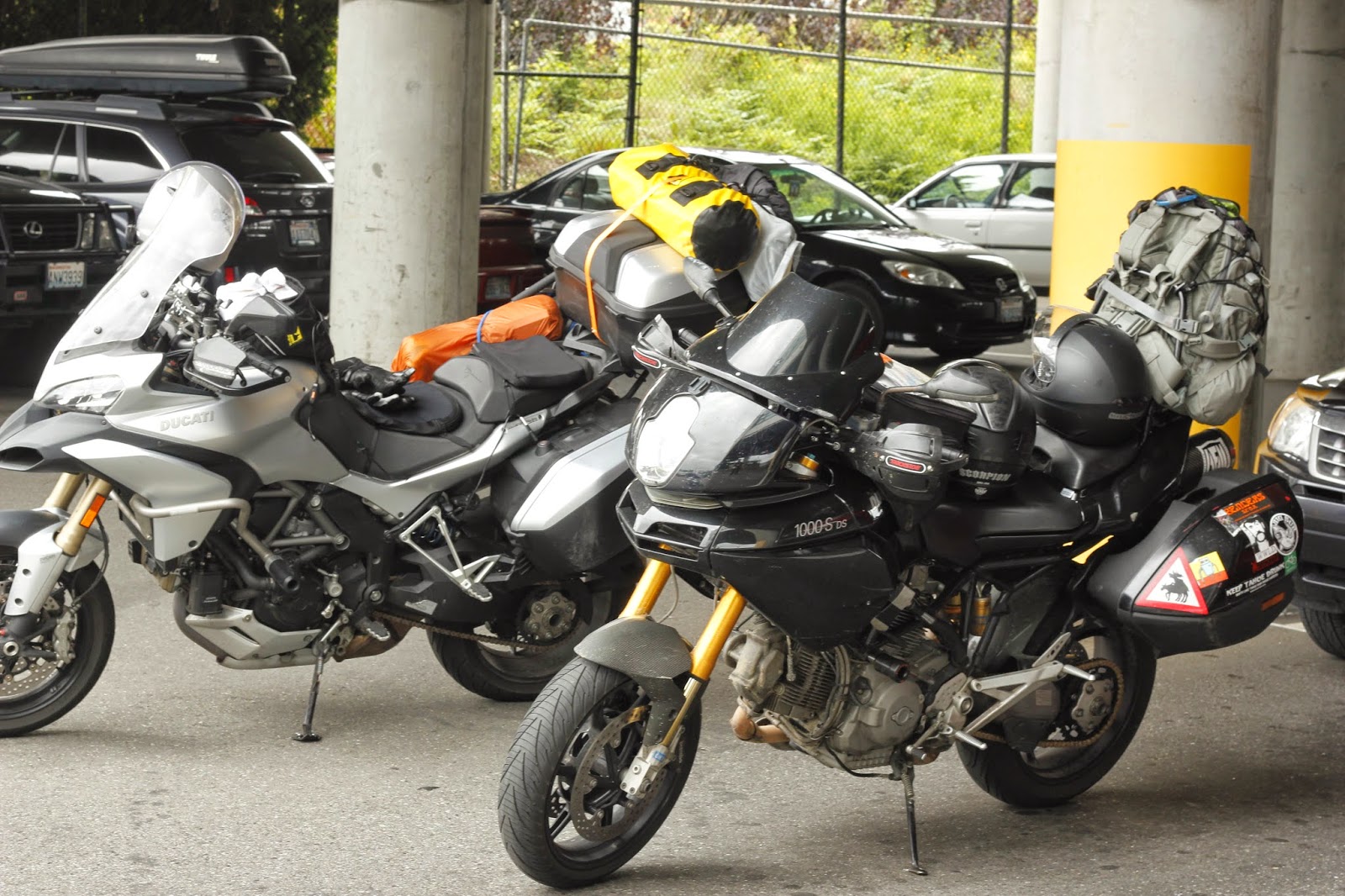 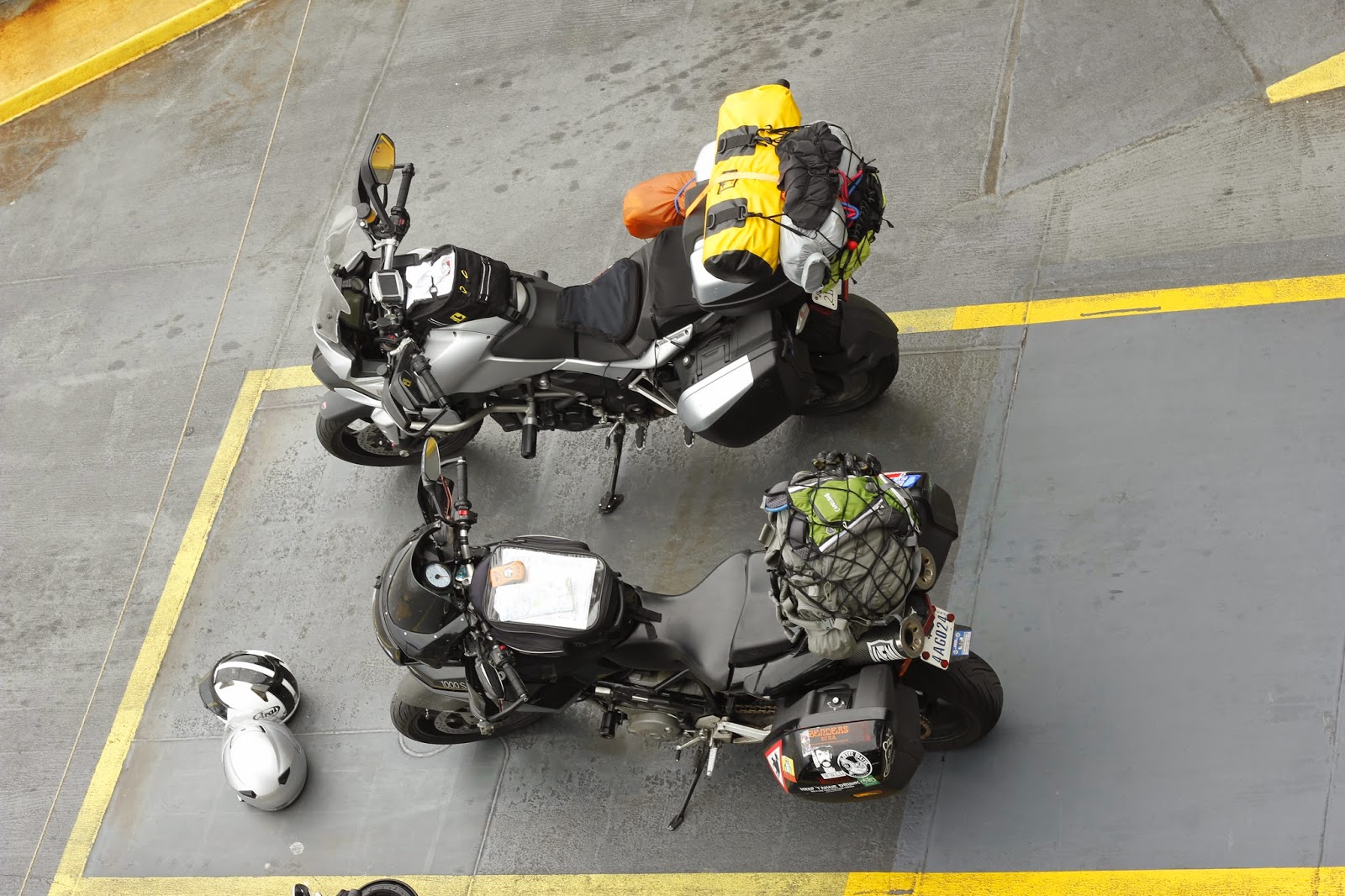 The Ducs have a front row seat on the ferry 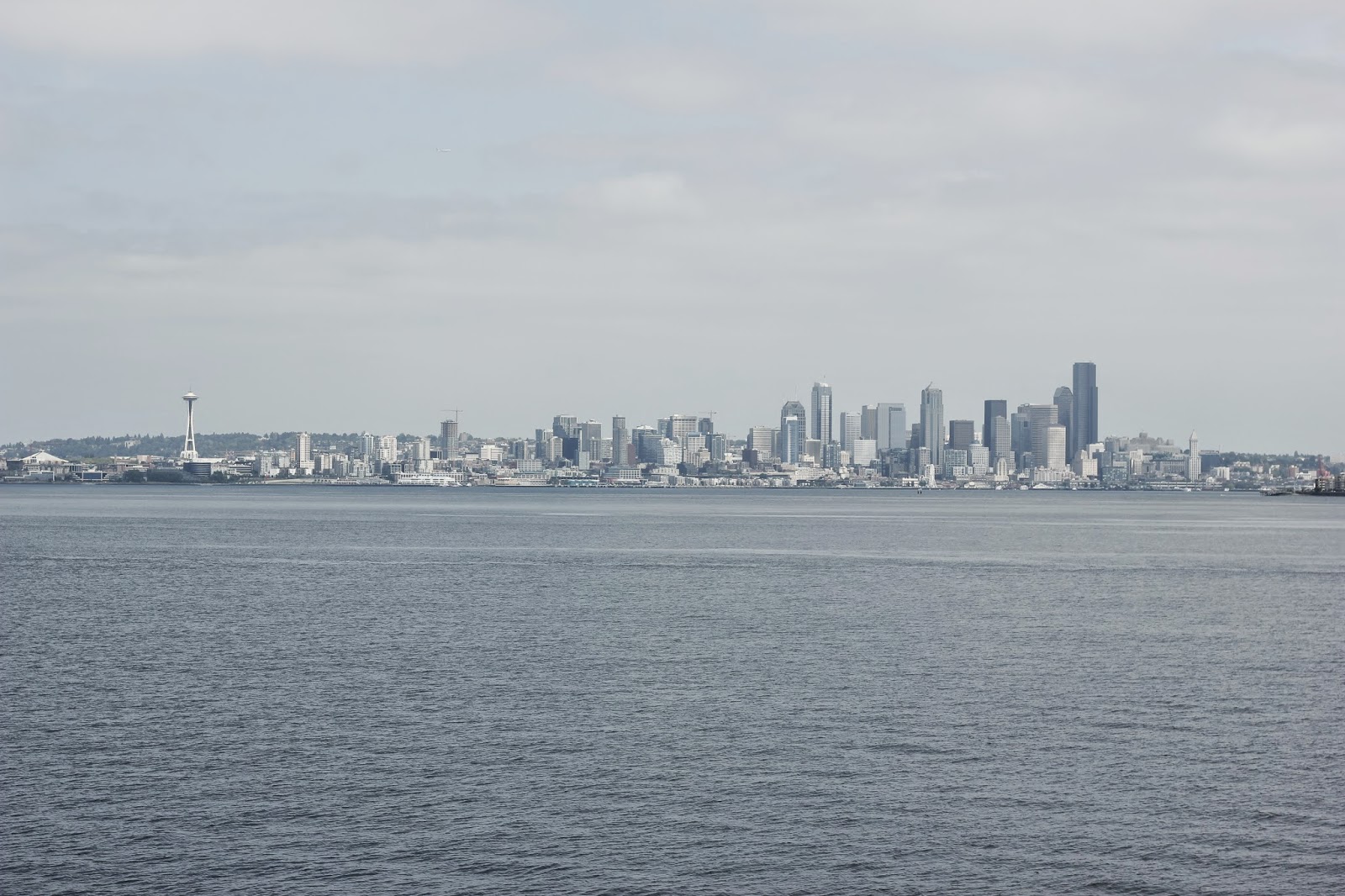 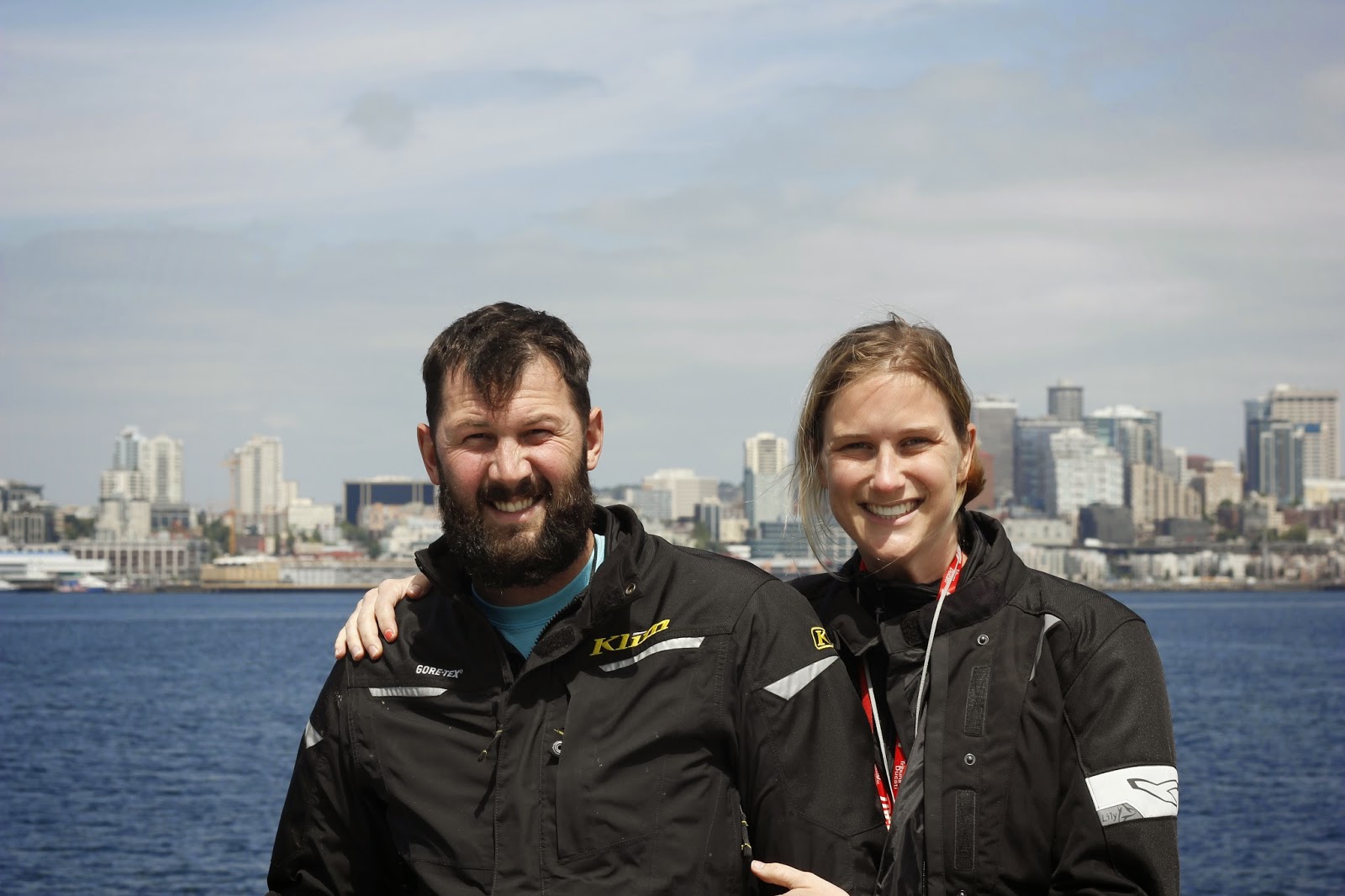 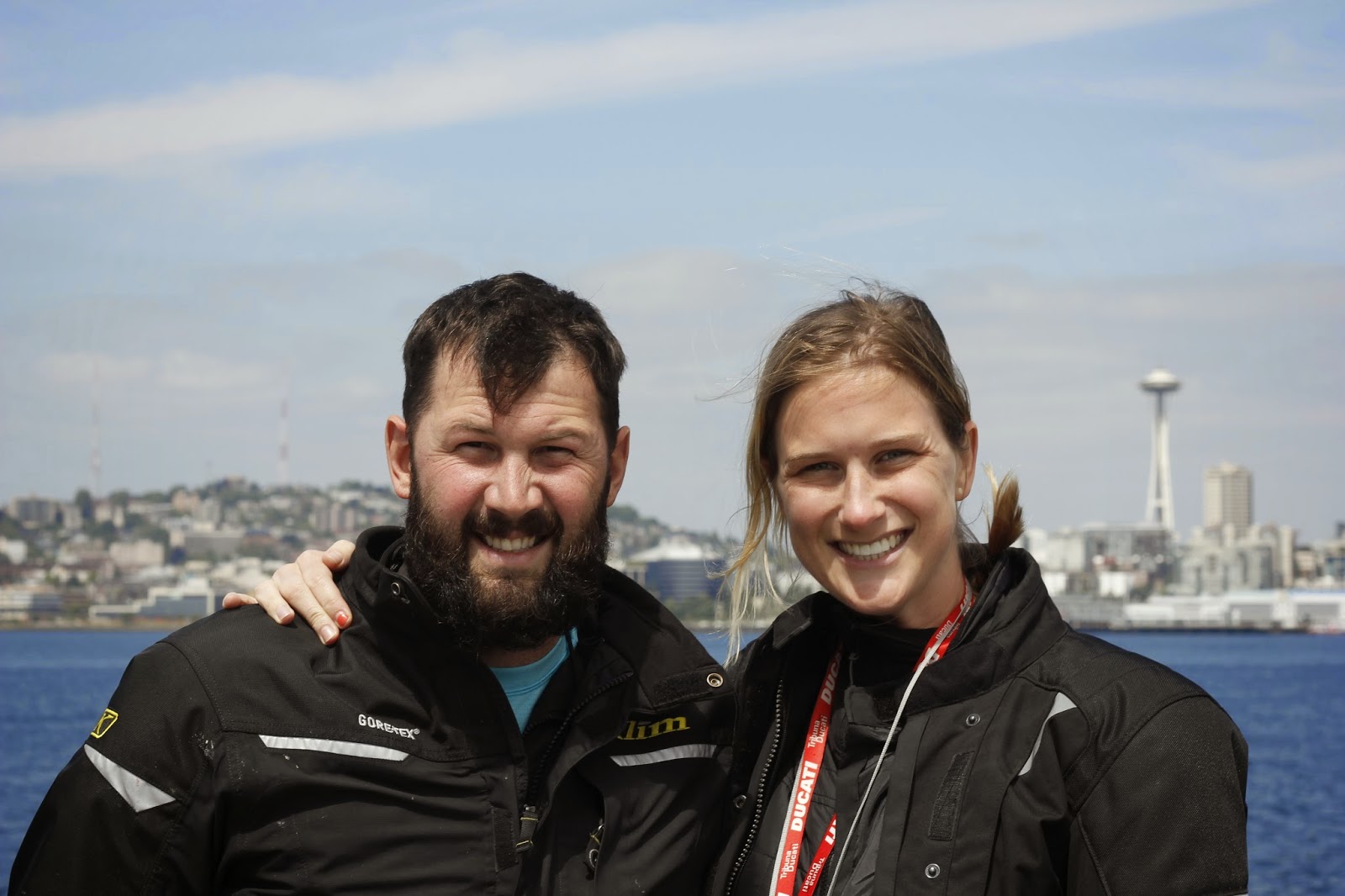 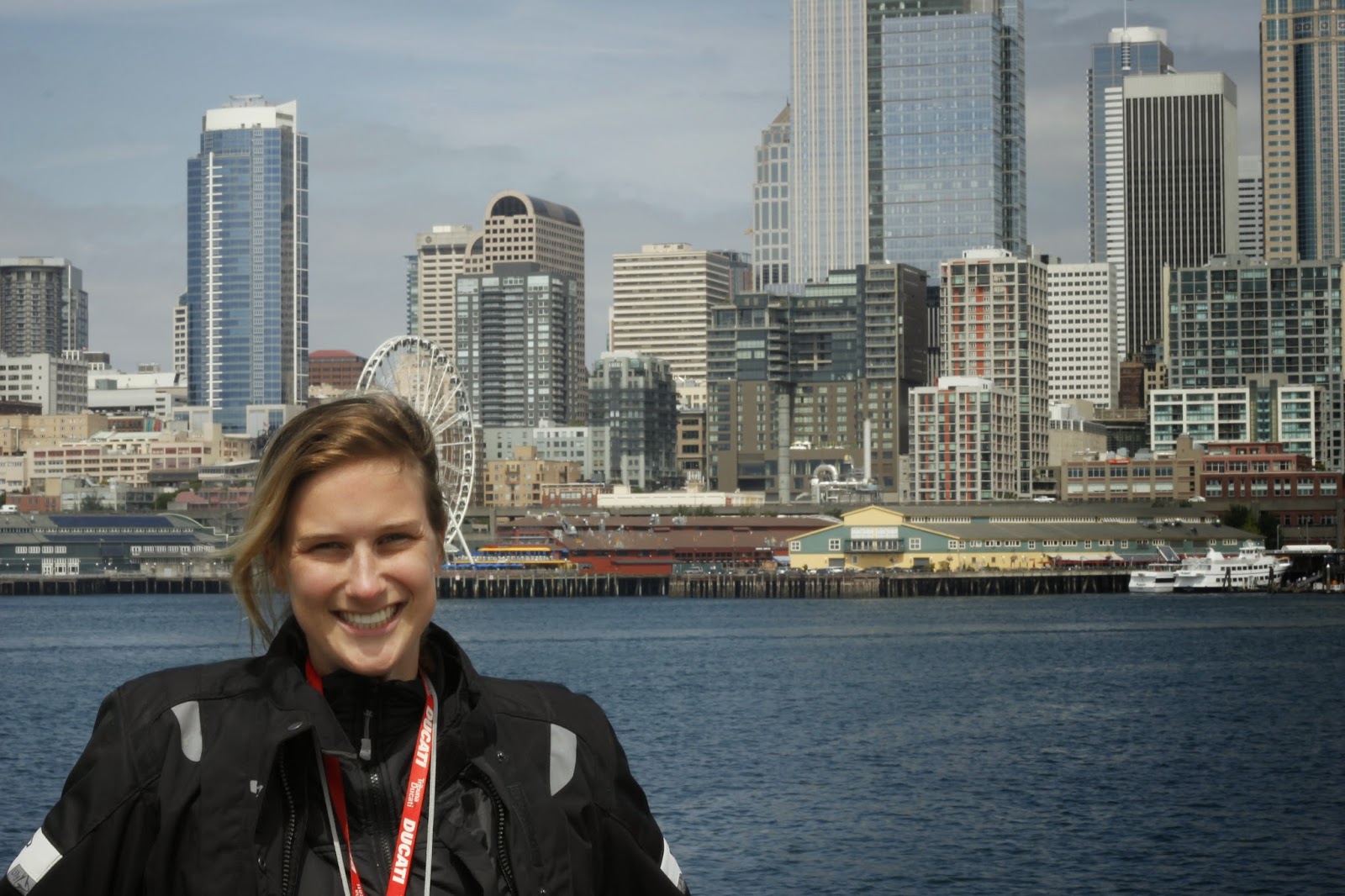 After disembarking the ferry into SUNNY Seattle, we made our ways up a street steep enough to belong in San Francisco.  We made it to Jason’s apartment with only a minor “oh-shit” moment as we watched Rick pop an unintentional wheelie at the top of the hill.  Jason and Rick used to work together during travel assignments all over the country.  Jason decided he was sick of moving, so he planted roots in Seattle almost 15 years ago.  He and his girlfriend Mandy, and their American Bulldog, Gertrude, were awesome enough to let us freshen up and drink a beer before heading into the city to explore.  Jason was also nice enough to accept two huge packages of camping gear that Rick and Dan shipped to his apartment last week.  With Rick’s fancy new rear rack, he will haul all the camping gear on the back of his motorcycle from here on out….thanks Rick!

After an agonizing but necessary stop at the Verizon store, Dan walked out with a shiny new phone that works, and we headed towards the Public Market.  We found ourselves really loving Seattle during our walk.  The city is clean and the architecture is beautiful.  After grabbing a latte at Starbucks….DUH, this is Seattle after all….we embarked on our obligatory tourist march through the Public Market.  We saw some gorgeous seafood, they threw enormous fish, we ate amazing crab and oysters, and we got the hell out of there! 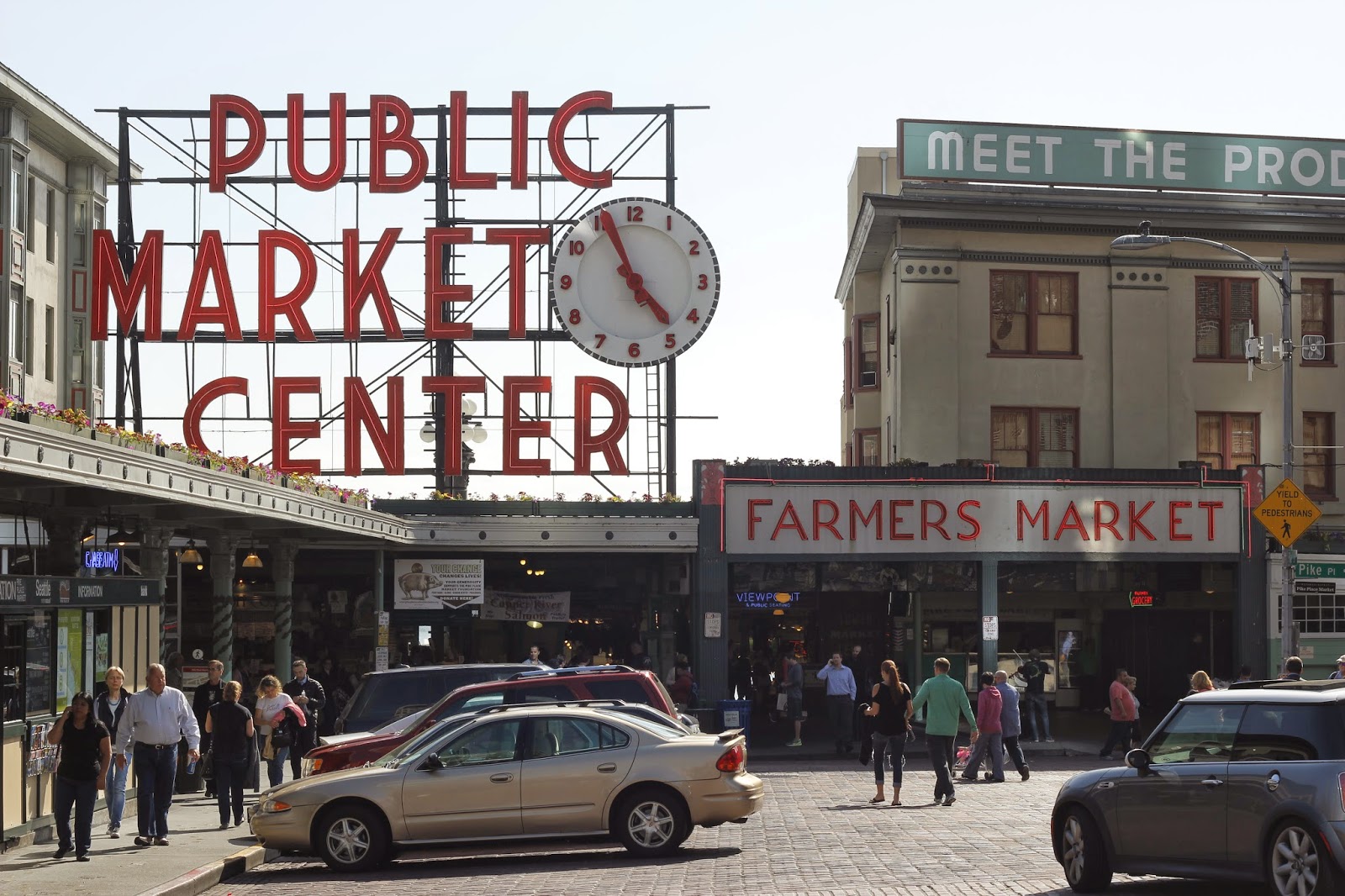 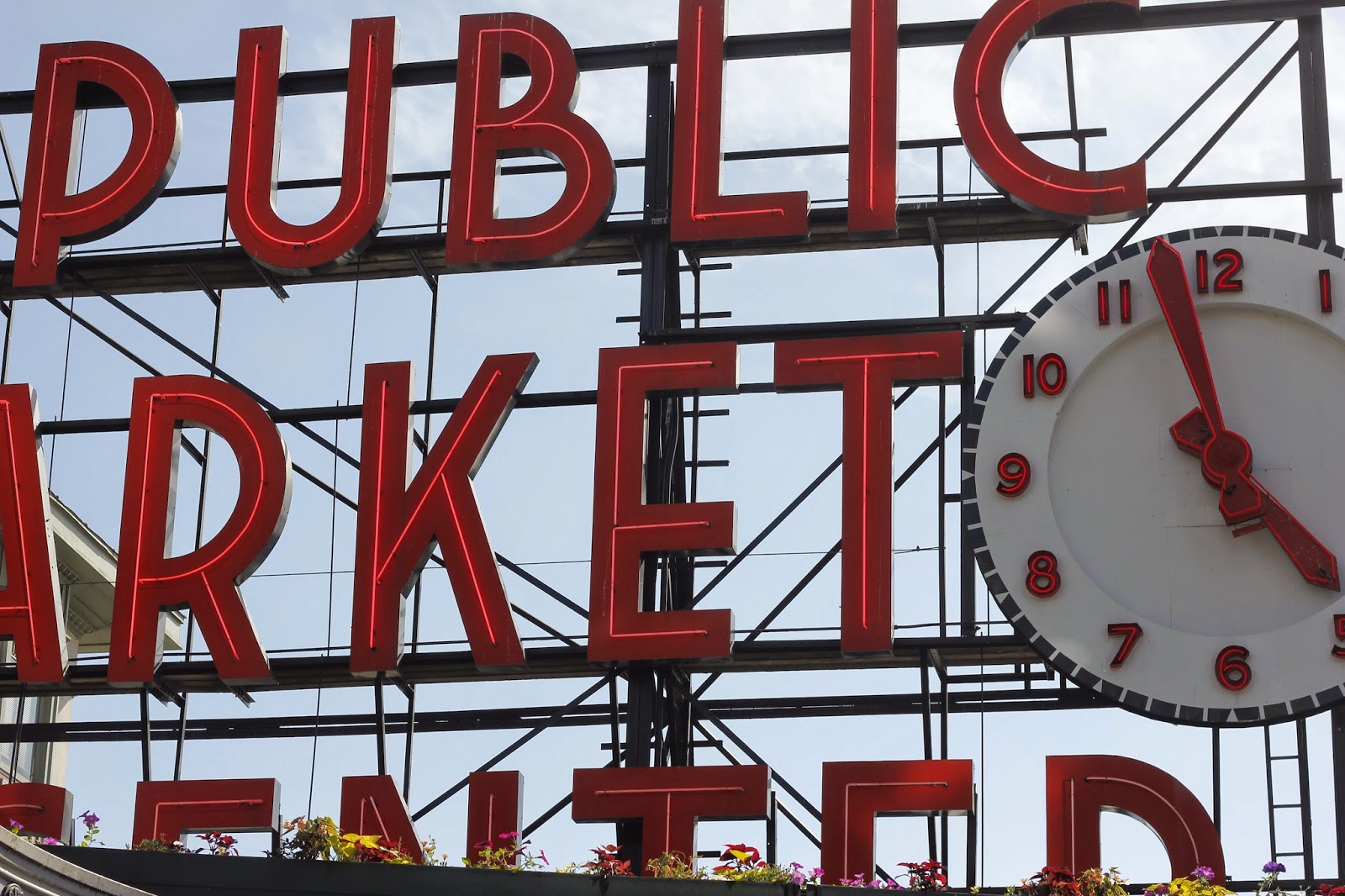 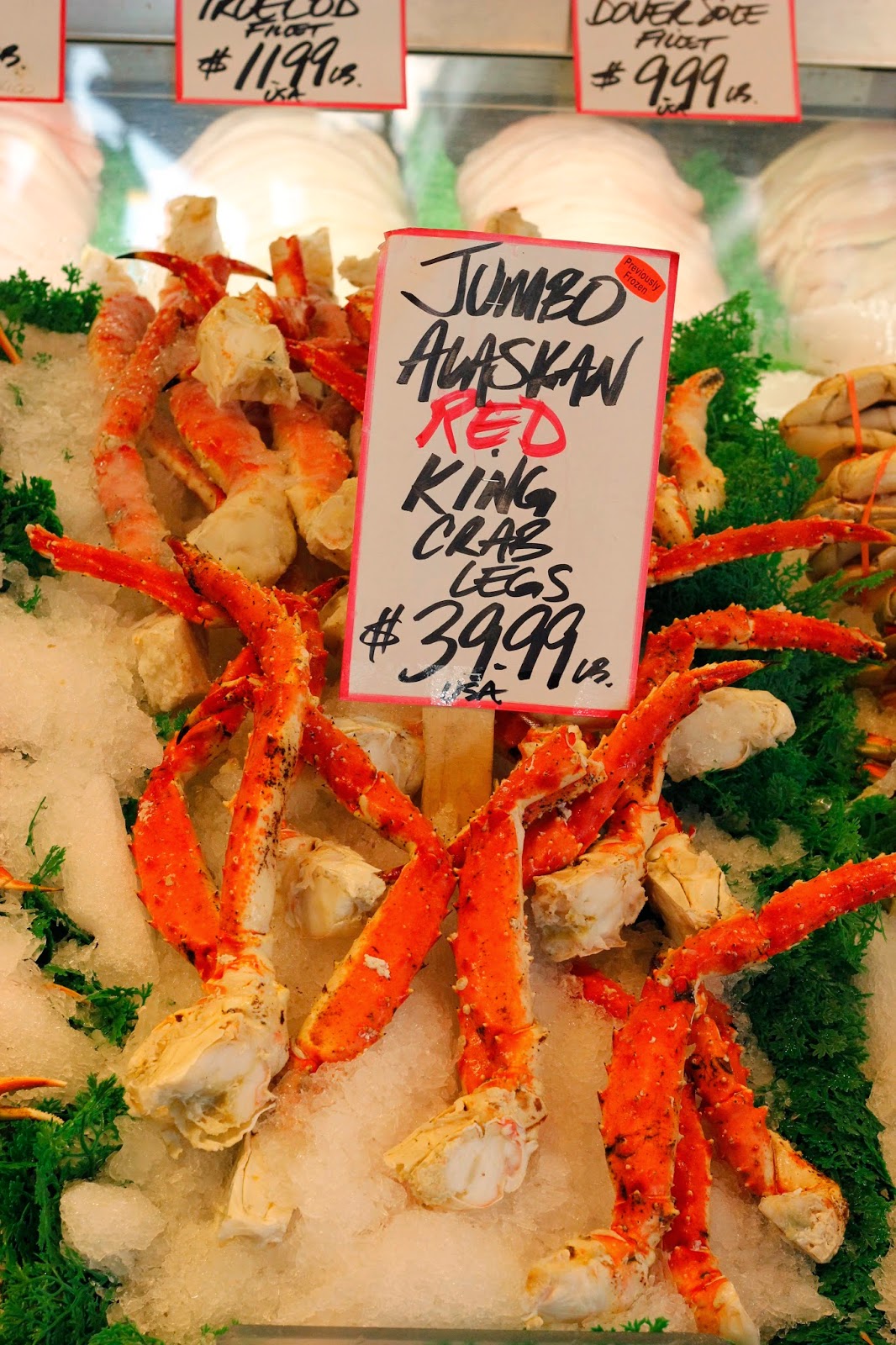 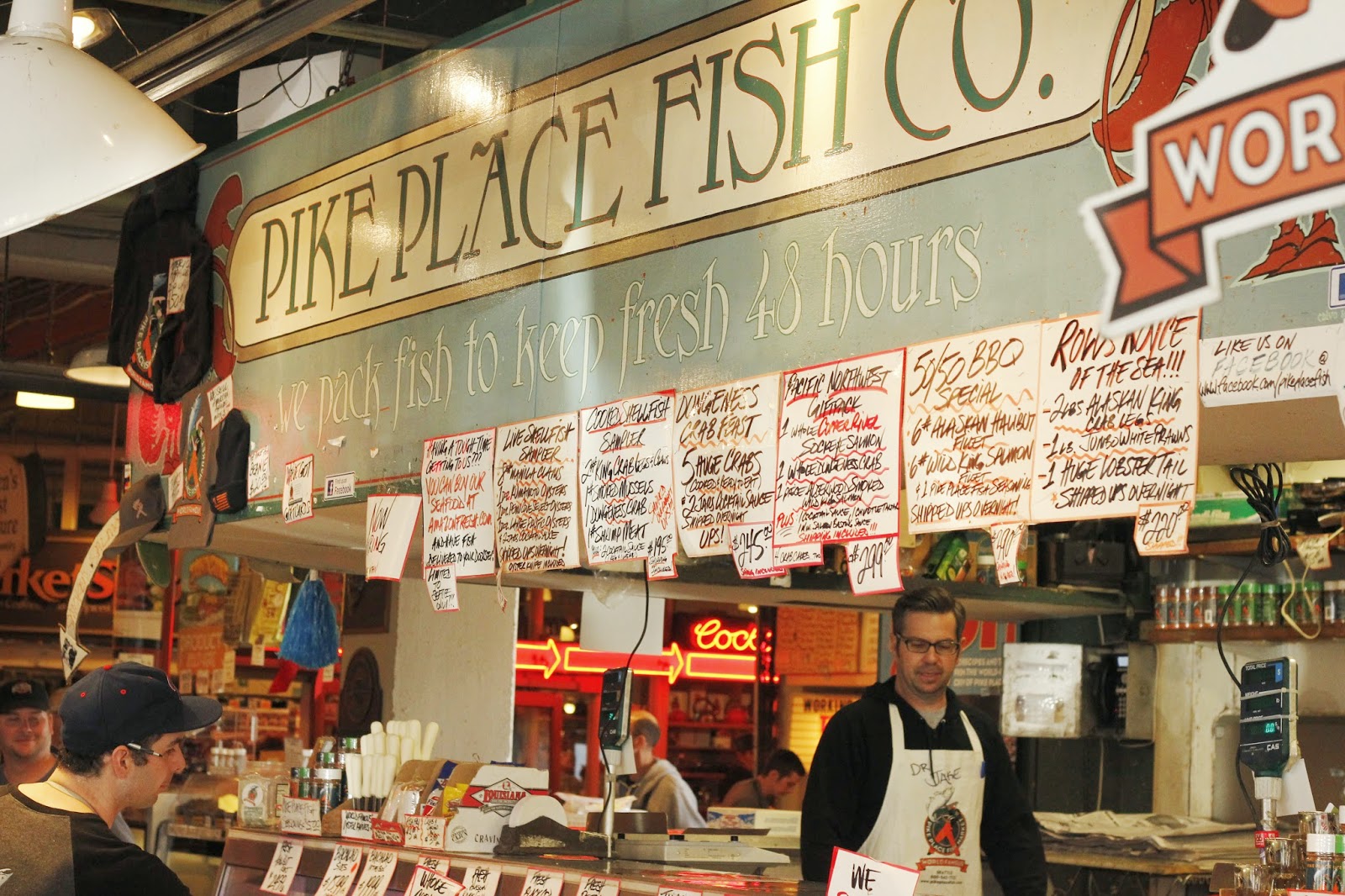 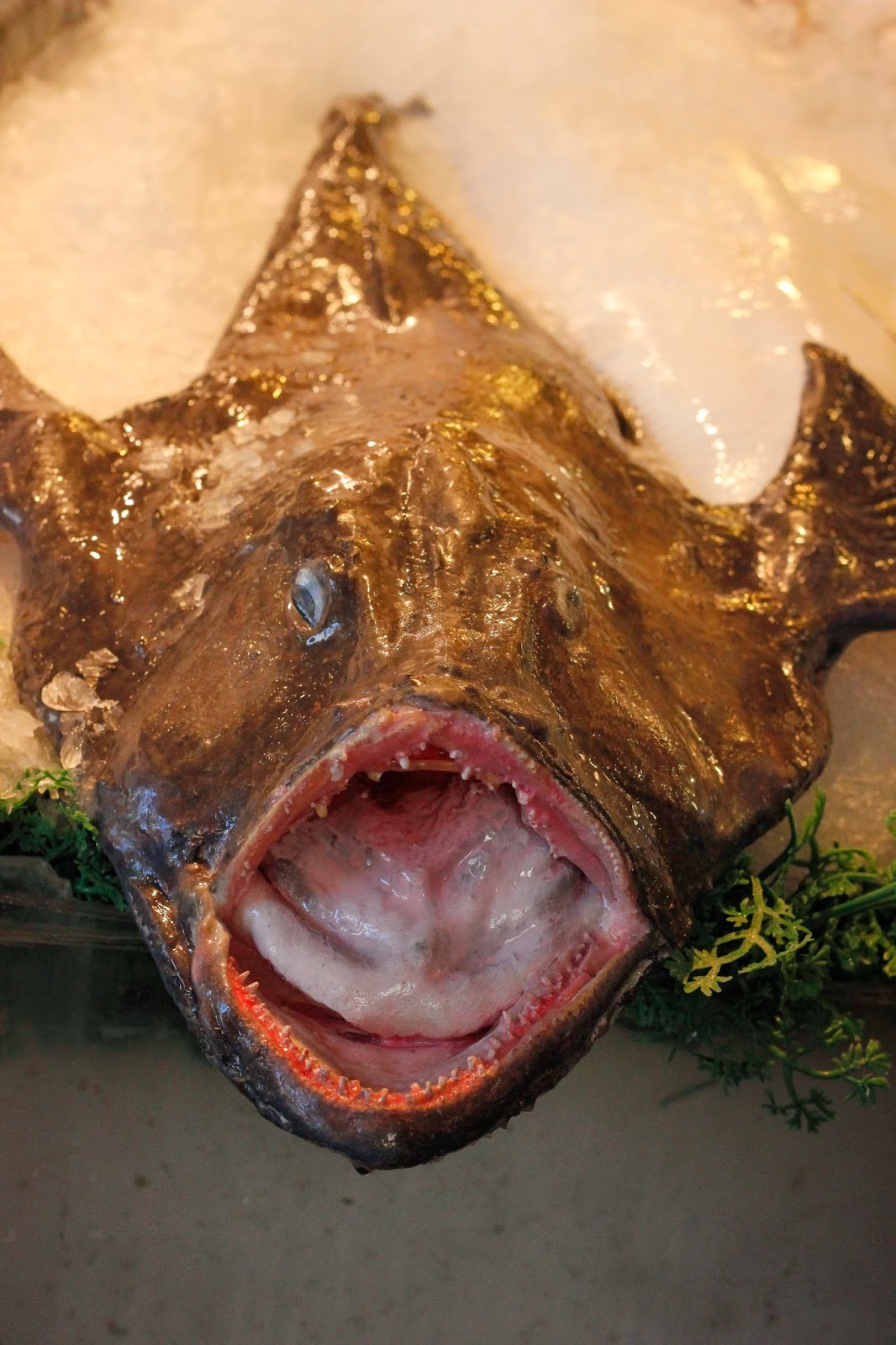 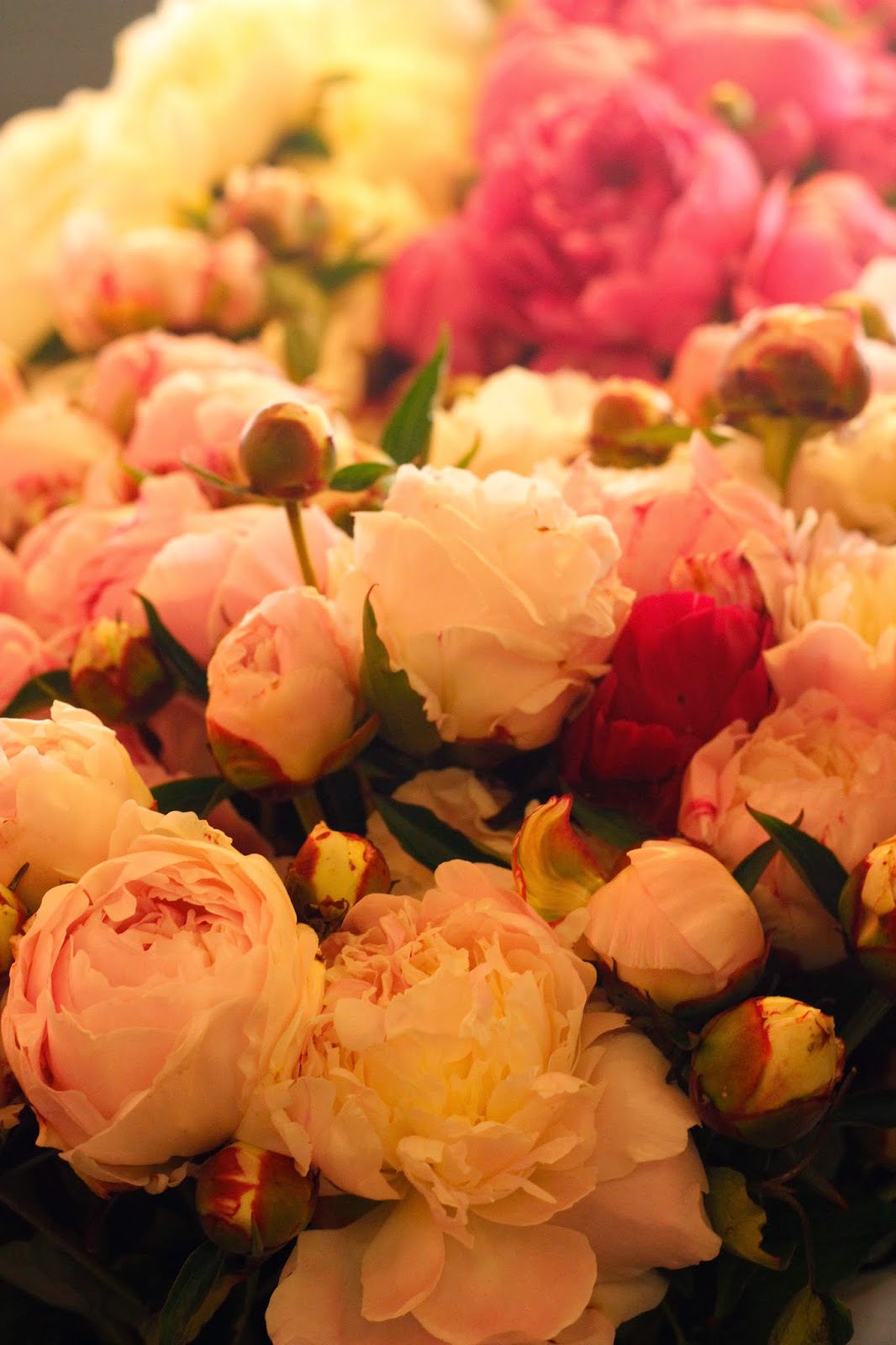 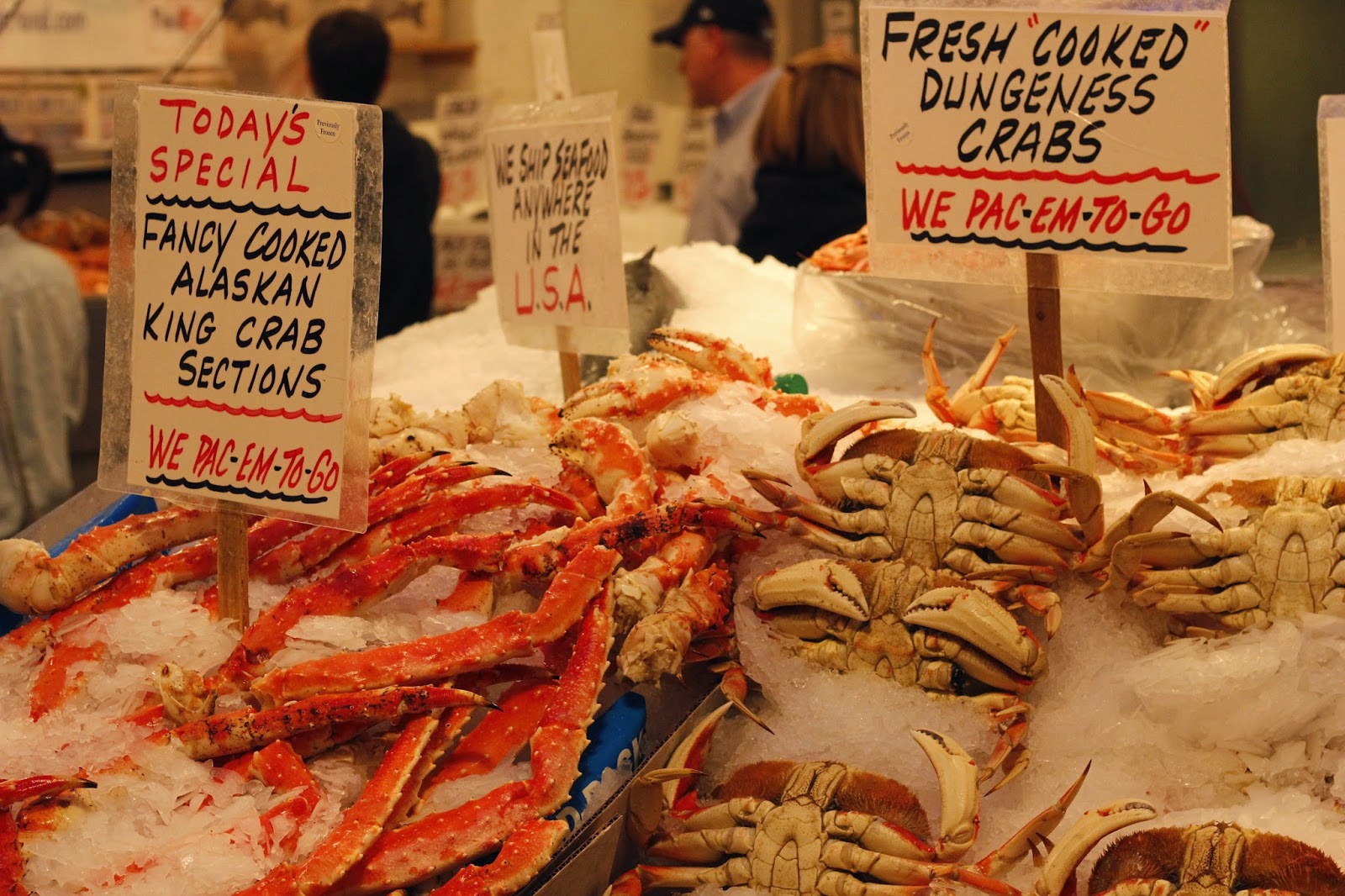 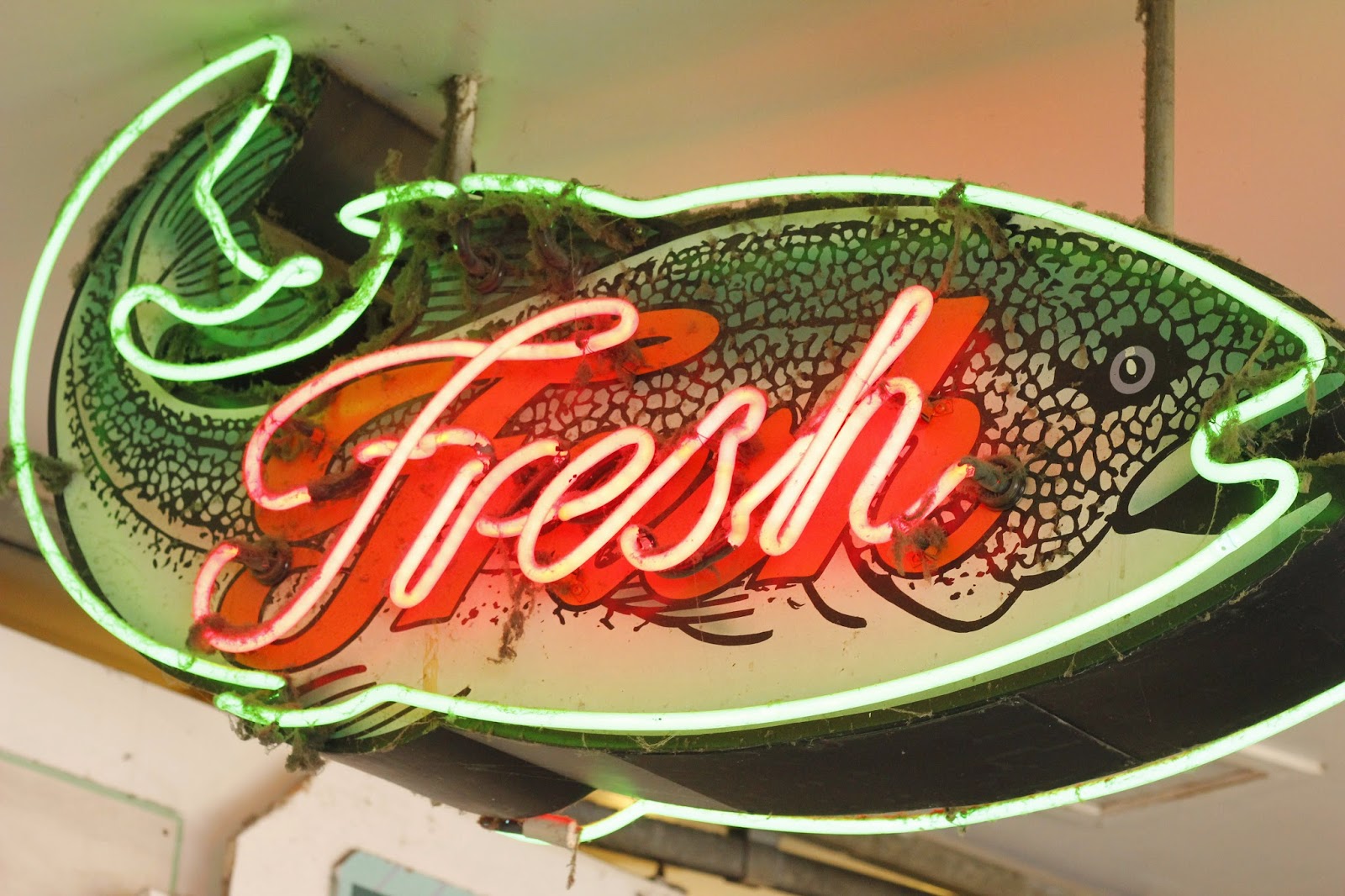 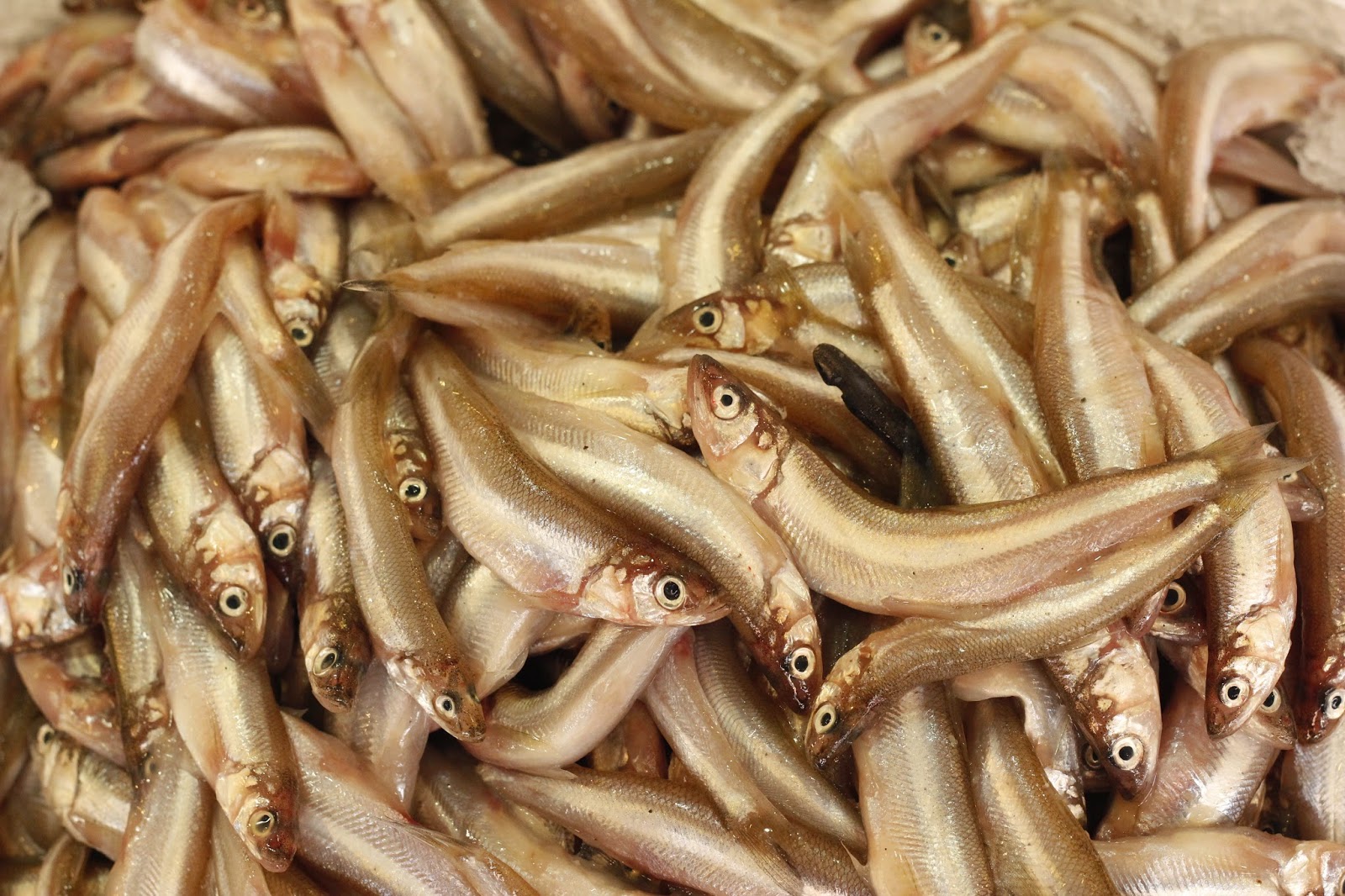 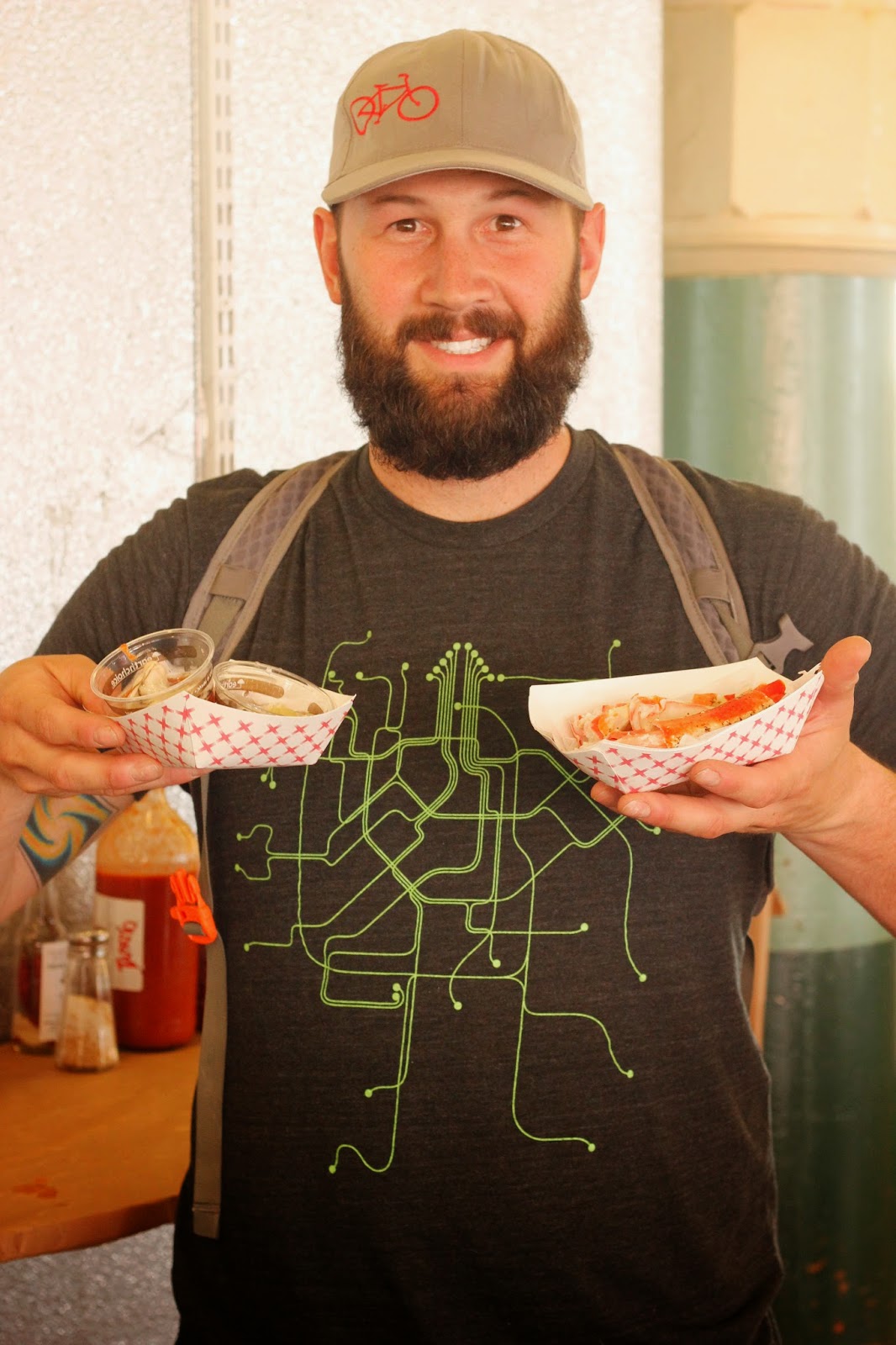 This happy boy got himself some crab legs! 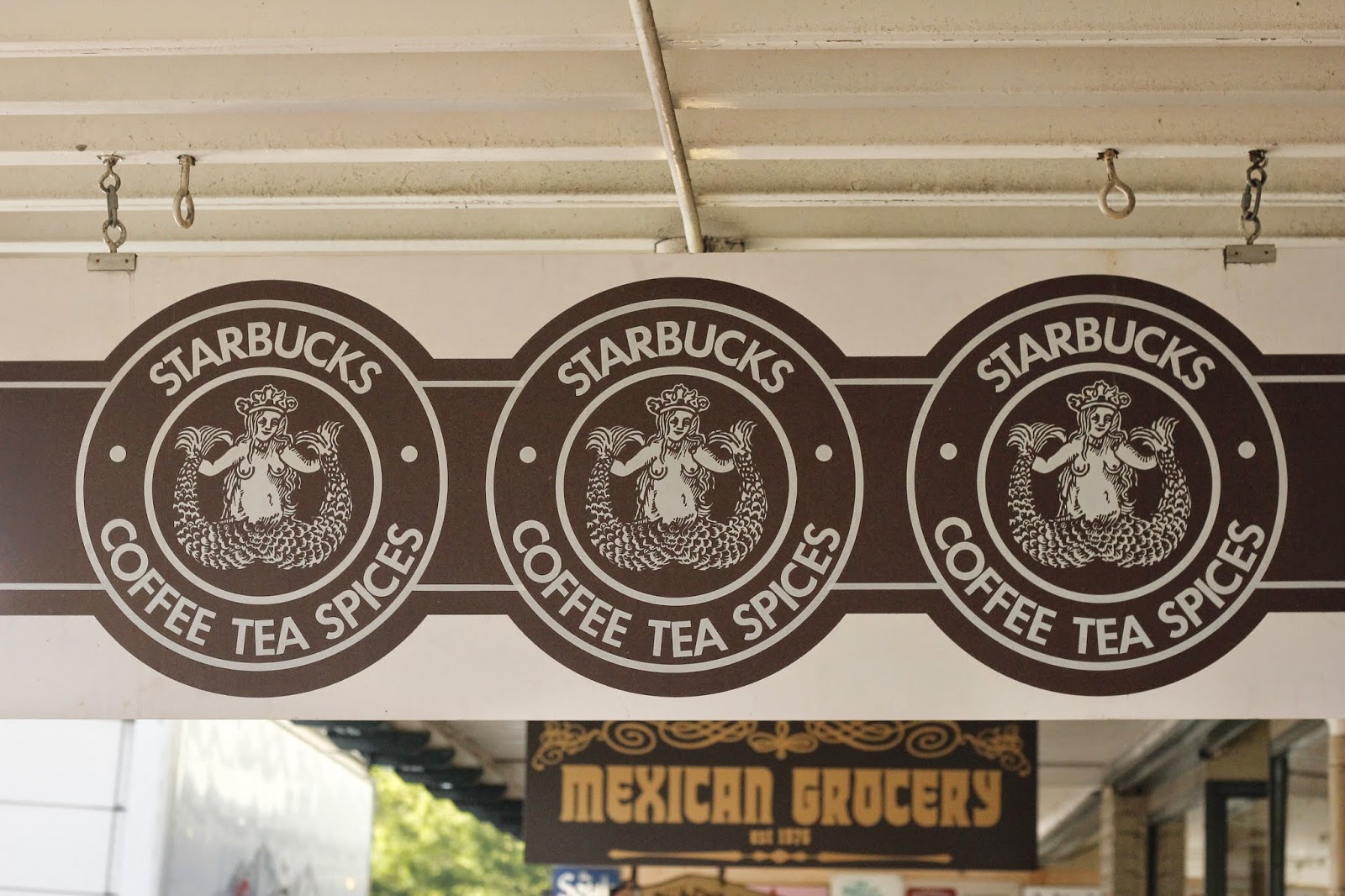 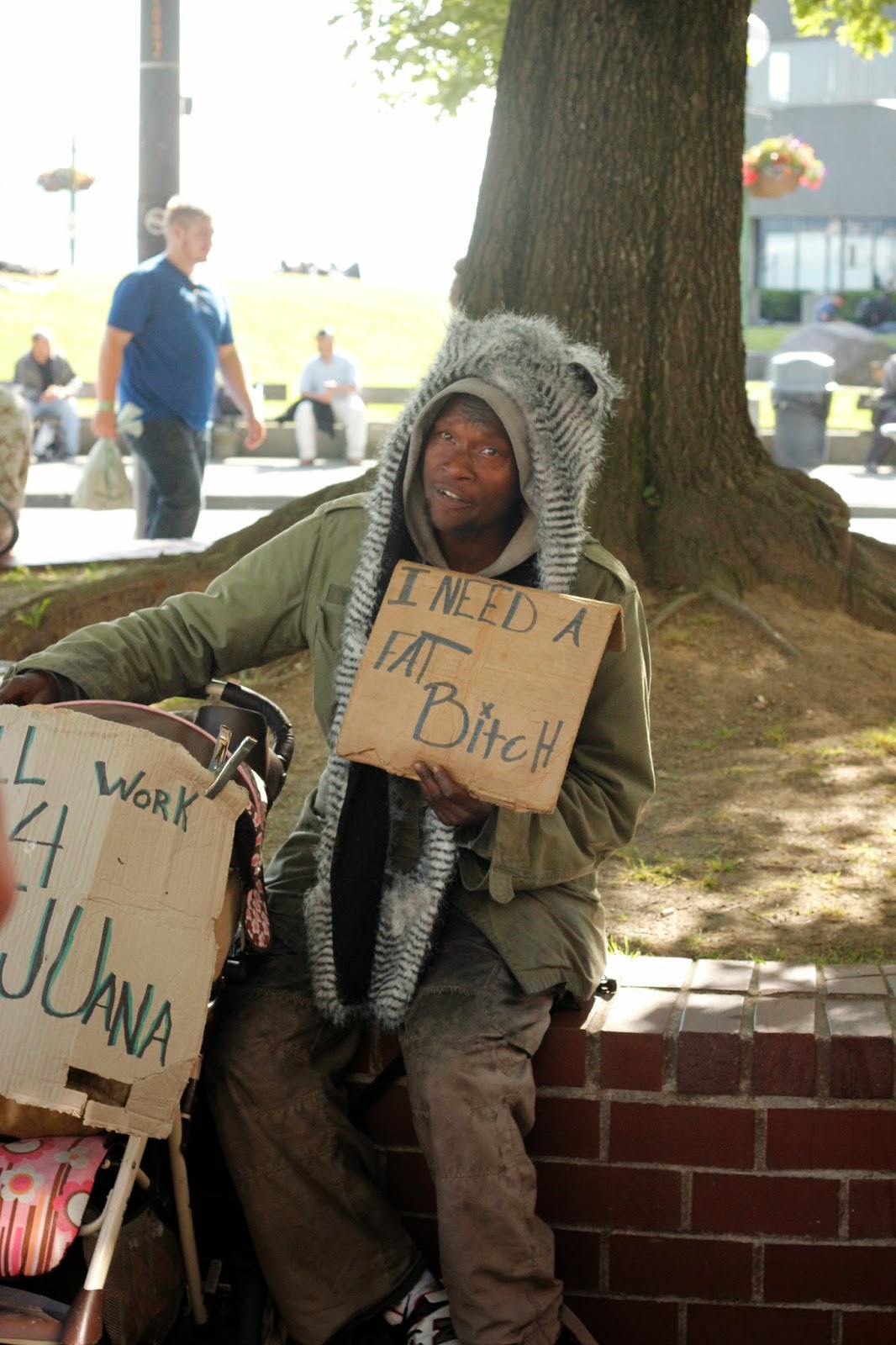 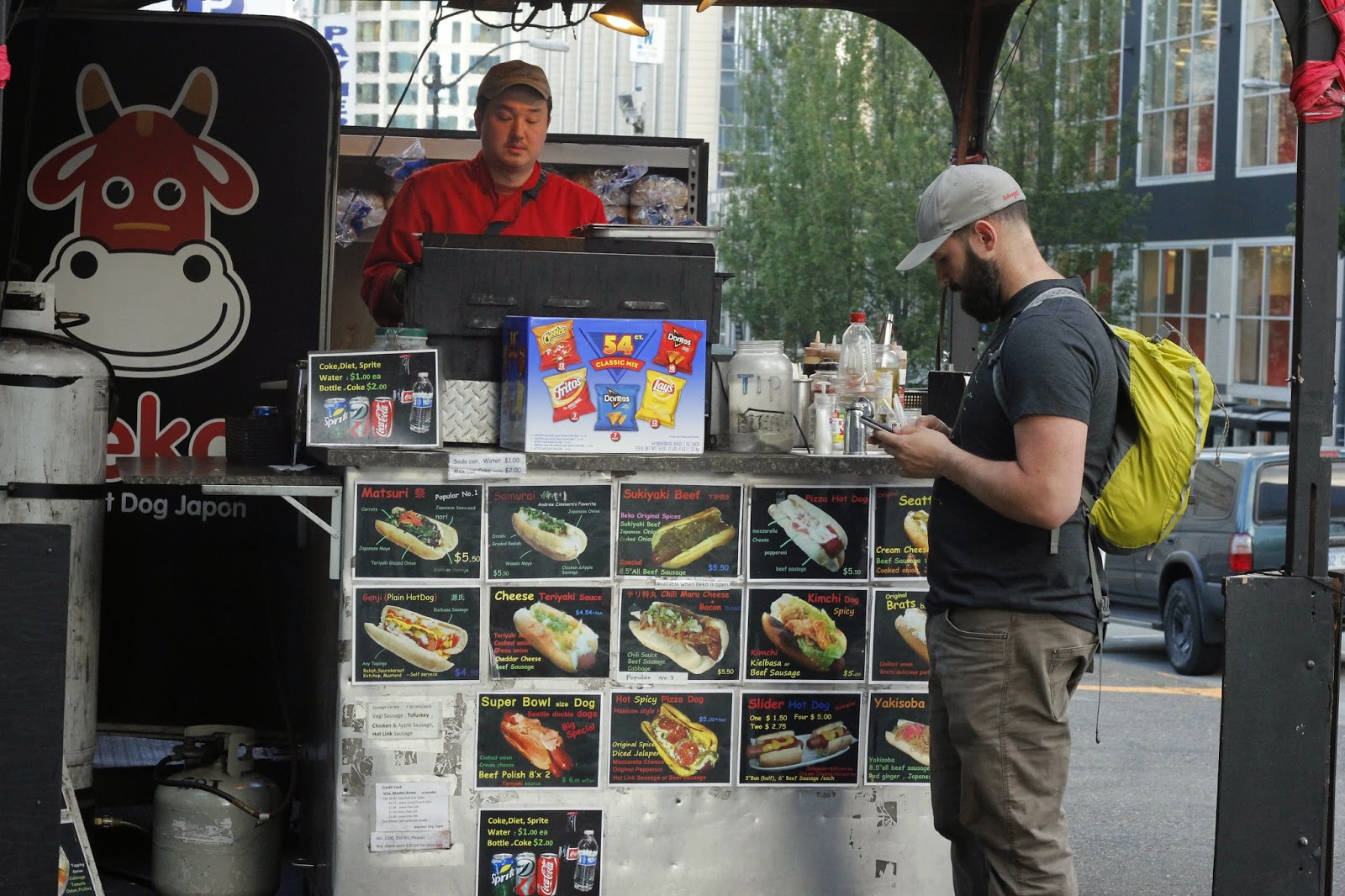 After meeting back up with Rick, Britney, and Jason for a quick beer, we met up with Carol and Matt for and amazing dinner of sushi and sake.  Dan and Carol worked together in San Francisco before Carol and Matt made the move up to Seattle a few months ago…and we were SO lucky to catch up with them only a week before they move back to the Bay Area.  We had a great time at dinner before heading back to their beautiful apartment to meet their Jack Russell, Marley.  After hanging out on their amazing deck overlooking the brightly lit Space Needle, Dan and I decided to get some shut-eye. 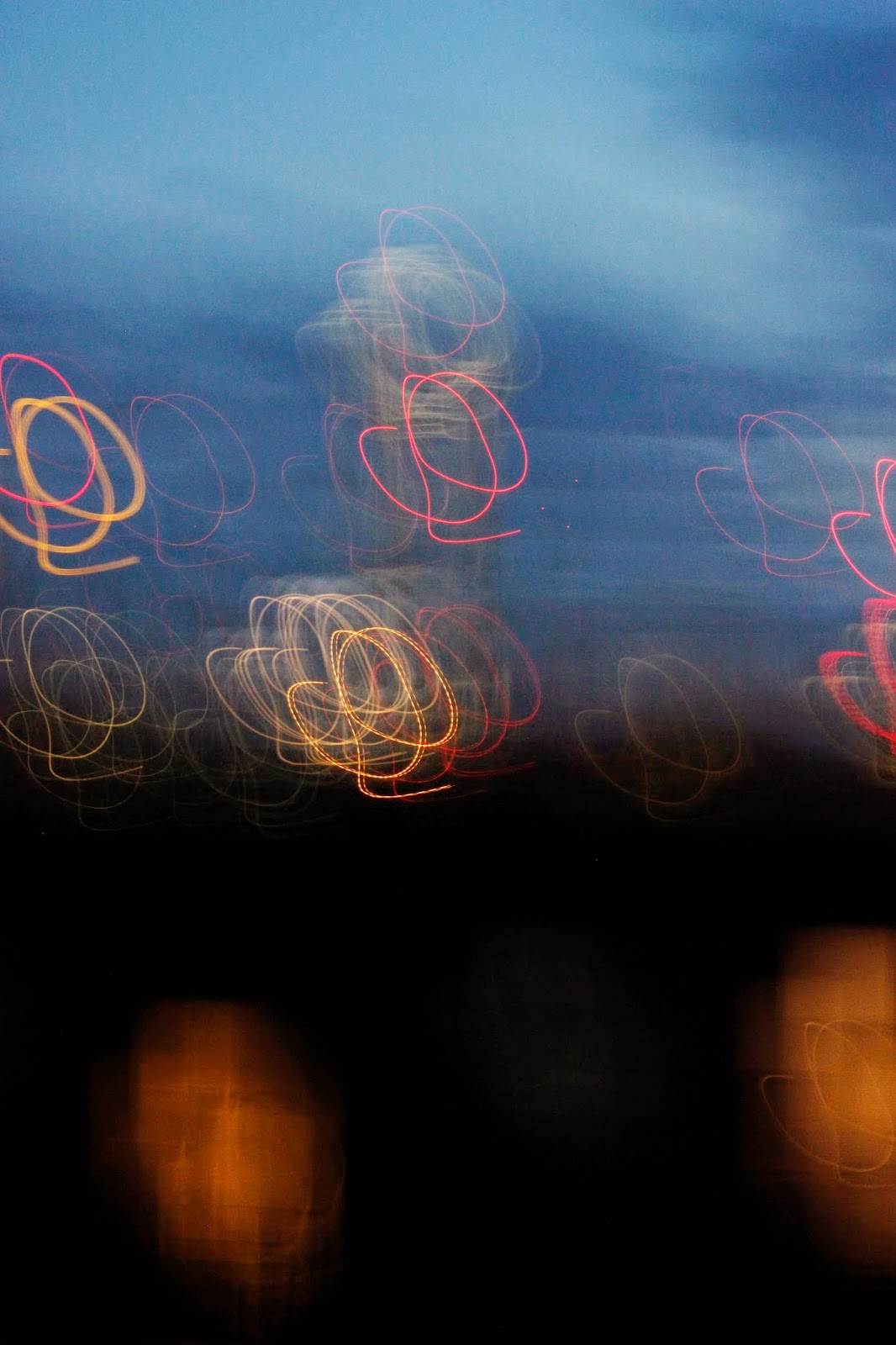 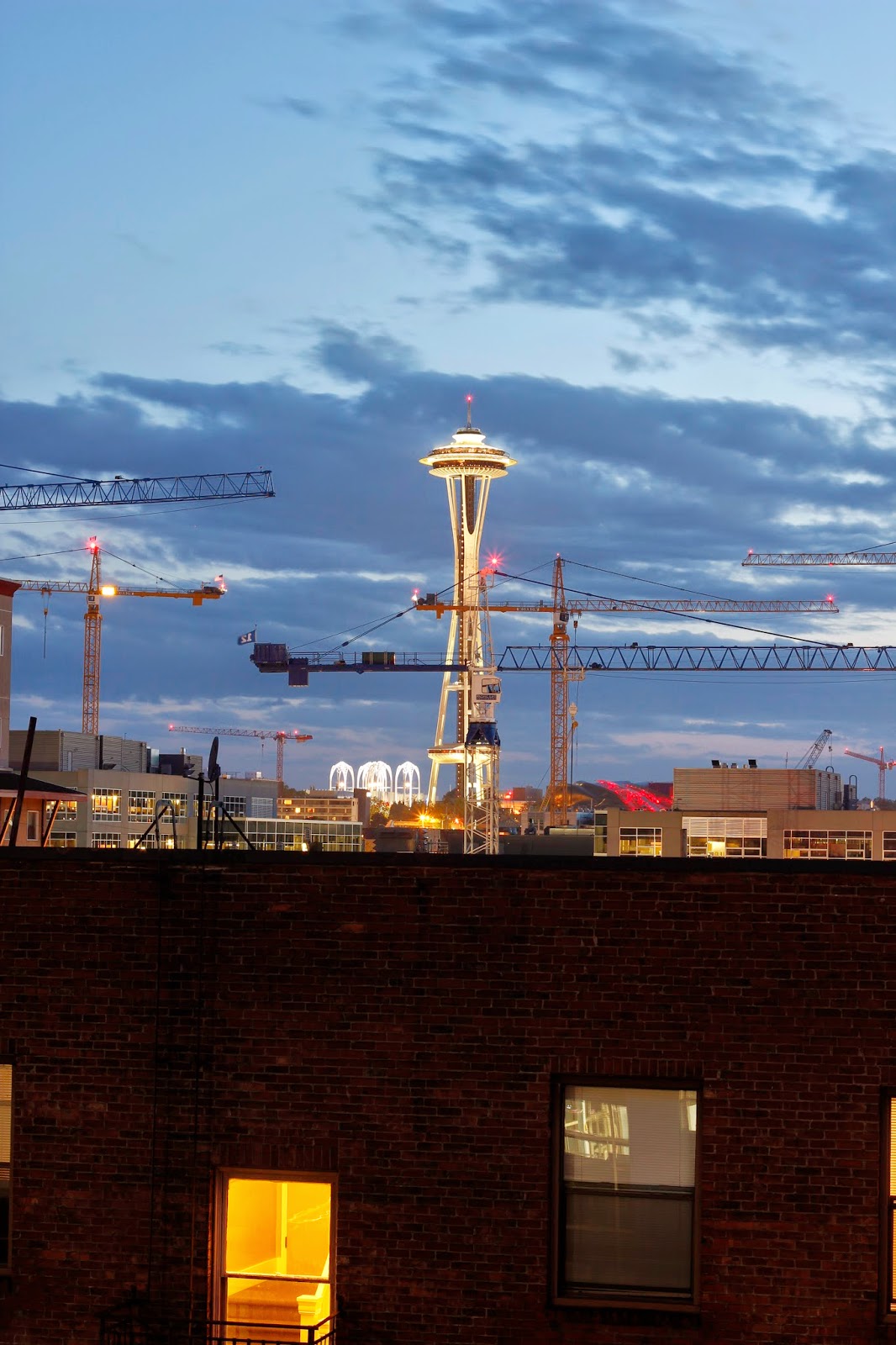 We have a long day ahead of us as we make our way from Seattle, Washington into 100 Mile House, Canada today.  Tonight will mark the first time that we are pulling out the camping gear and “roughing” it.  We will try and update the blog as Internet access allows!