Time to get outta Alaska!!!

Well it's been some time since I've actually had some time to sit down and type.  Mainly because we have been really pounding out the miles since my last post.  Funny how my body can tell it's been a long day.  The next morning, my finger are swollen from the vibrations of the motorcycle and my body just straight up aches.  Everywhere.

Let's head back to my day from Fairbanks to Tok to Dawson. 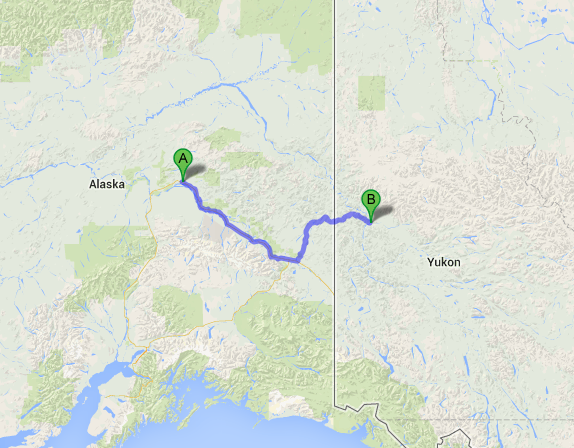 Before I could leave, I had to stop once more at Dan's from Adventure Cycles.  I got a quick bike clean and..... 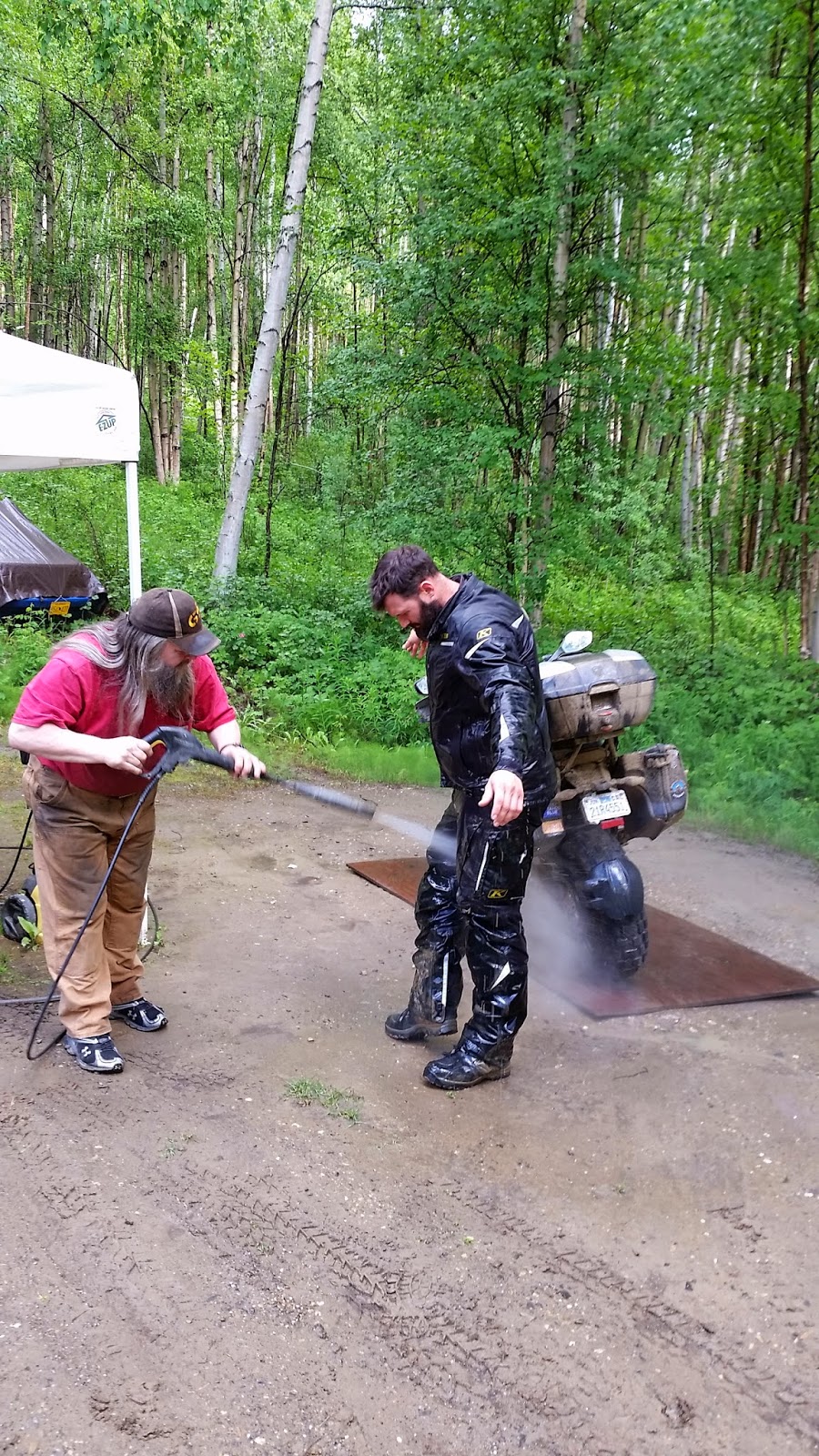 My original plan was to meet up with Rick in Tok and stay again at Tok's Eagle Claw Campground, but when i got to Tok, I realized the night everybody stayed was the night before.  Shit, missed that.  Well there really wasn't anything to do about it anyway since I wouldn't have made the push from Coldfoot to Tok in one day anyway.  I swung by the Santa Clause House in North Pole, AK when i was passing through on the way to Tok. 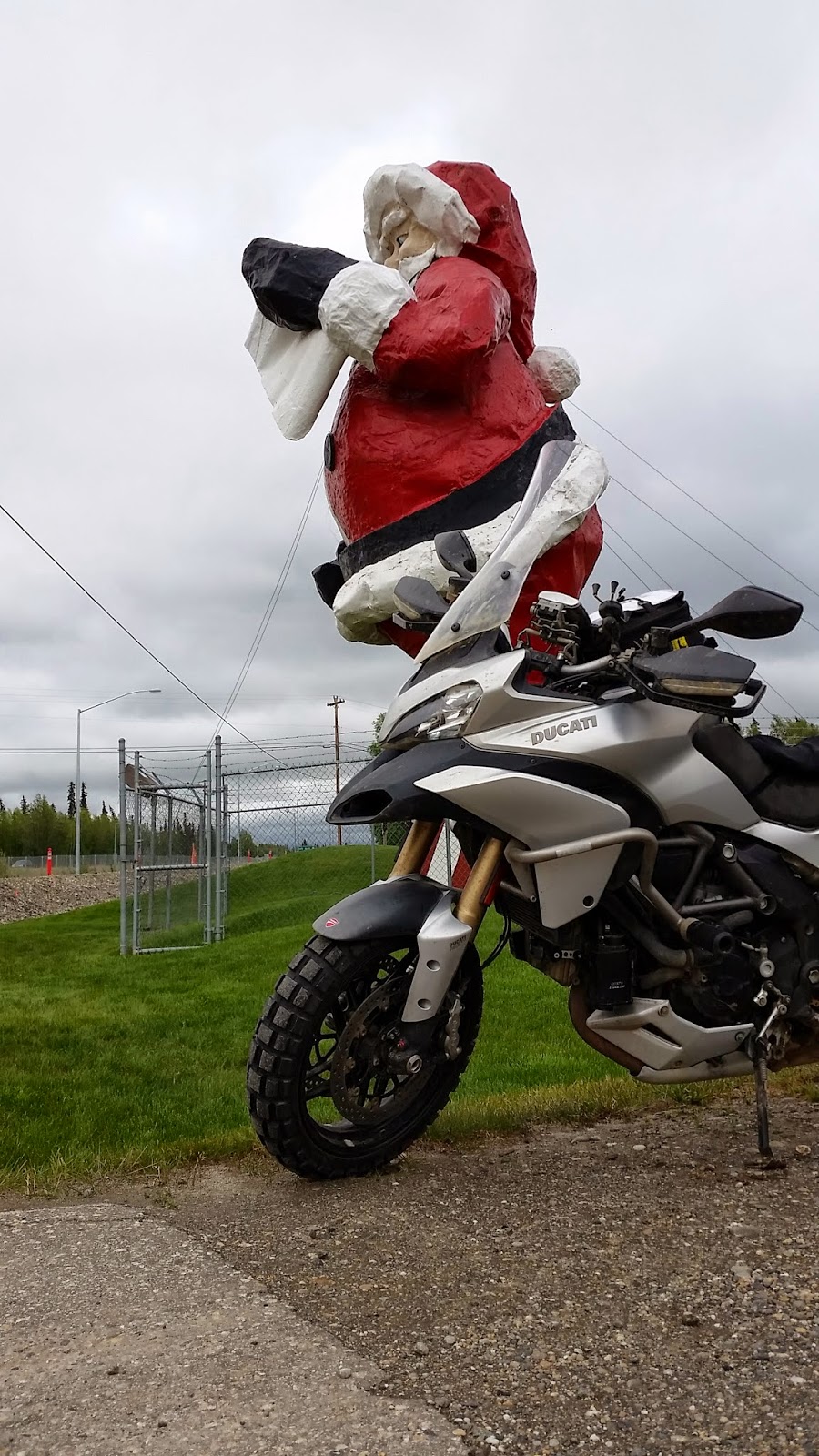 This rain is starting to get to me. 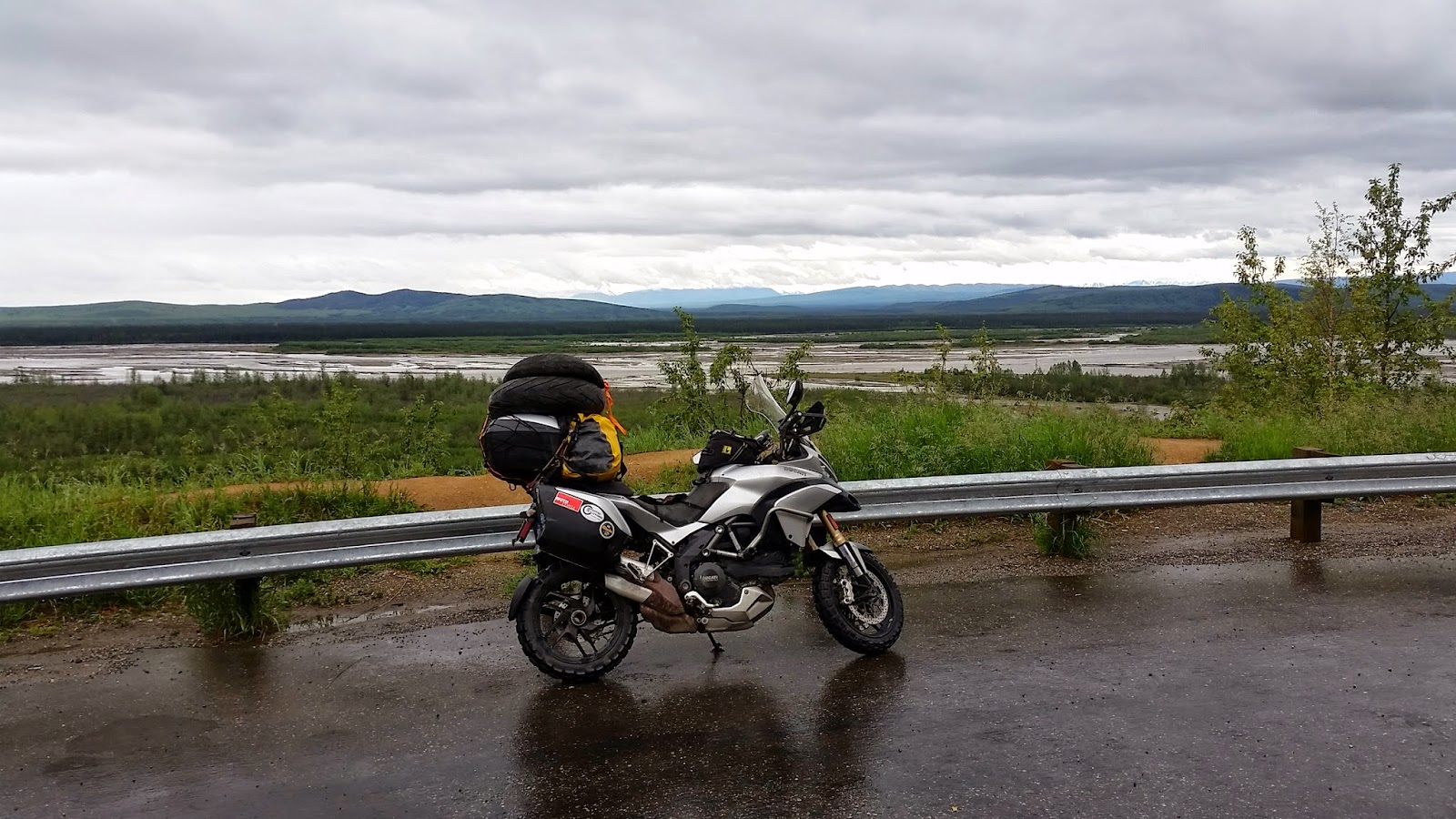 When I got to Tok, I spoke with Vanessa at the campground, checked the time and made the decision to hit the Top of the World Highway.  This is a huge pass that is like 160 miles long, half pavement, half dirt, muddy when wet.  The night before it snowed 6 inches on the pass.  No Bueno.  The reports i got from guys who went over earlier that was it was a train wreck.  Bikes crashing everywhere, mud slinging, slow moving.  Granted i was hitting the pass 5 hours later in the day, my big problem was that the boarder crossing from Alaska to Dawson which is in the Yukon closes at 8pm.  I didn't have time to dick around.  Off I went headed for the Top of the World Highway. 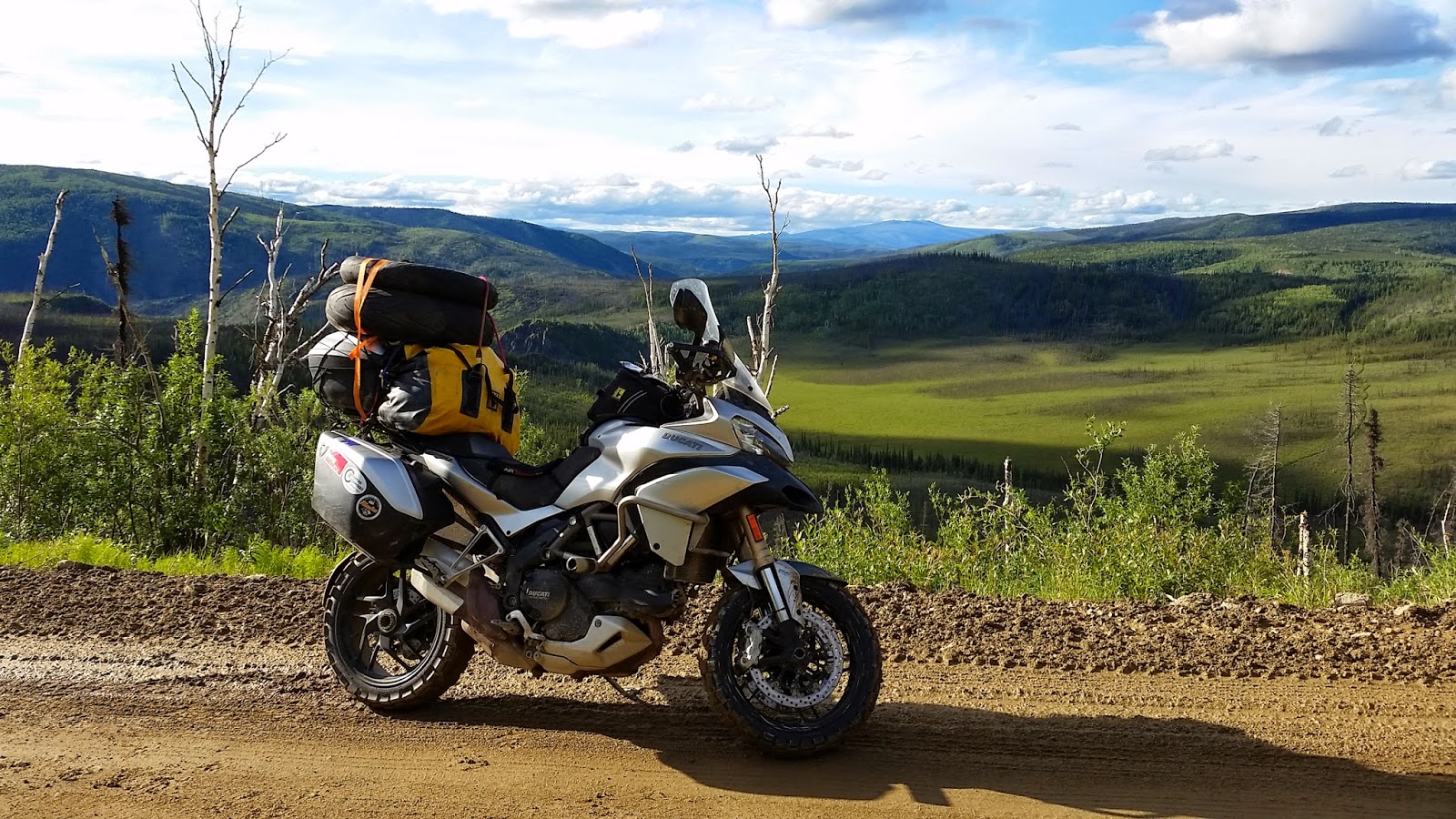 I had been riding with my Michelin PR3 tires on the back of my bike since I needed the knobby TKC tires for the top of the world highway mud.  I contemplated taking the TKC's off in fairbanks, but it's a darn good thing i didn't.


After hauling ass on the pass and getting to chicken at 6:45pm, that only gave me an hour and 15 minutes to make it to the boarding.  Time to jet!  I was spitting mud everywhere on the multistrada trying to make it.  It was 41 miles to the boarder crossing from Chicken, ALL DIRT and MUD! 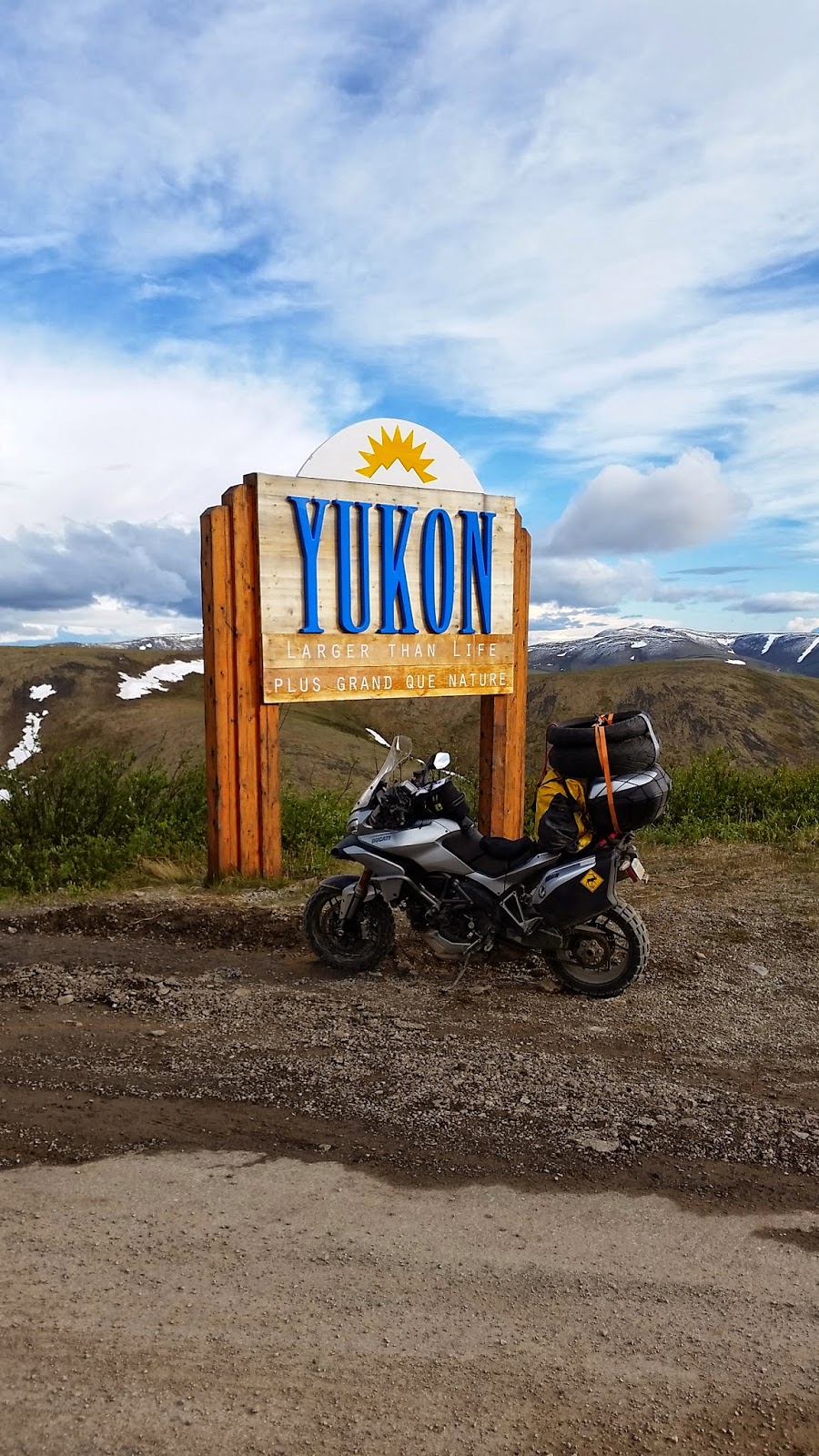 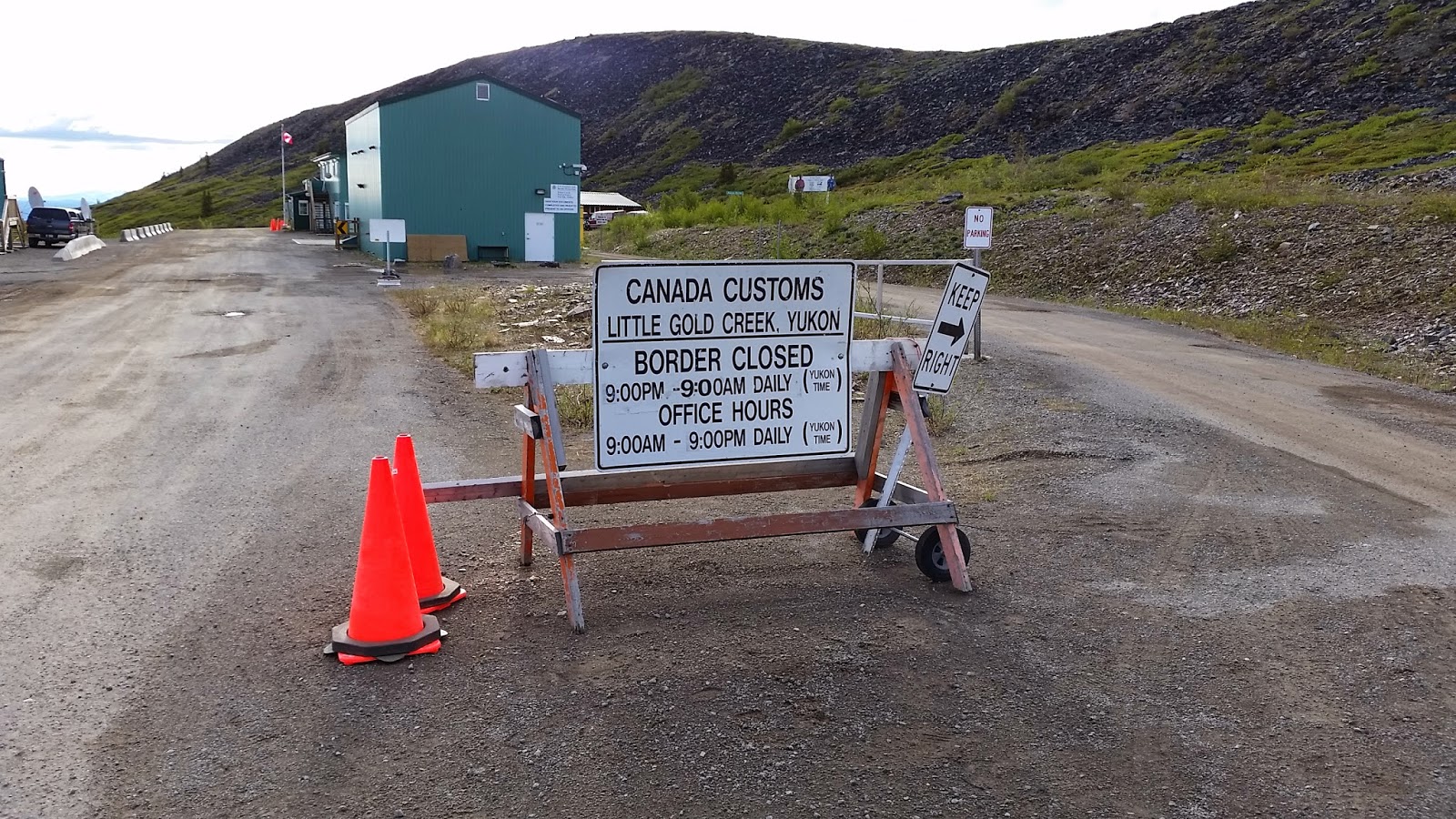 Luckily, i made it with 10 minutes to spare.  7:50pm, i rolled into the boarding crossing.  A sign of relief.  If i had missed the crossing, I would have put up a tent right next to the boarding crossing since you can put up a tent anywhere you damn well wish in Alaska.  It wouldn't have opened until 9am the next morning and i would have missed a crazy night in Dawson with all the guys at the D2D gathering.


Here's a few more pictures along the TOW highway after i crossed. 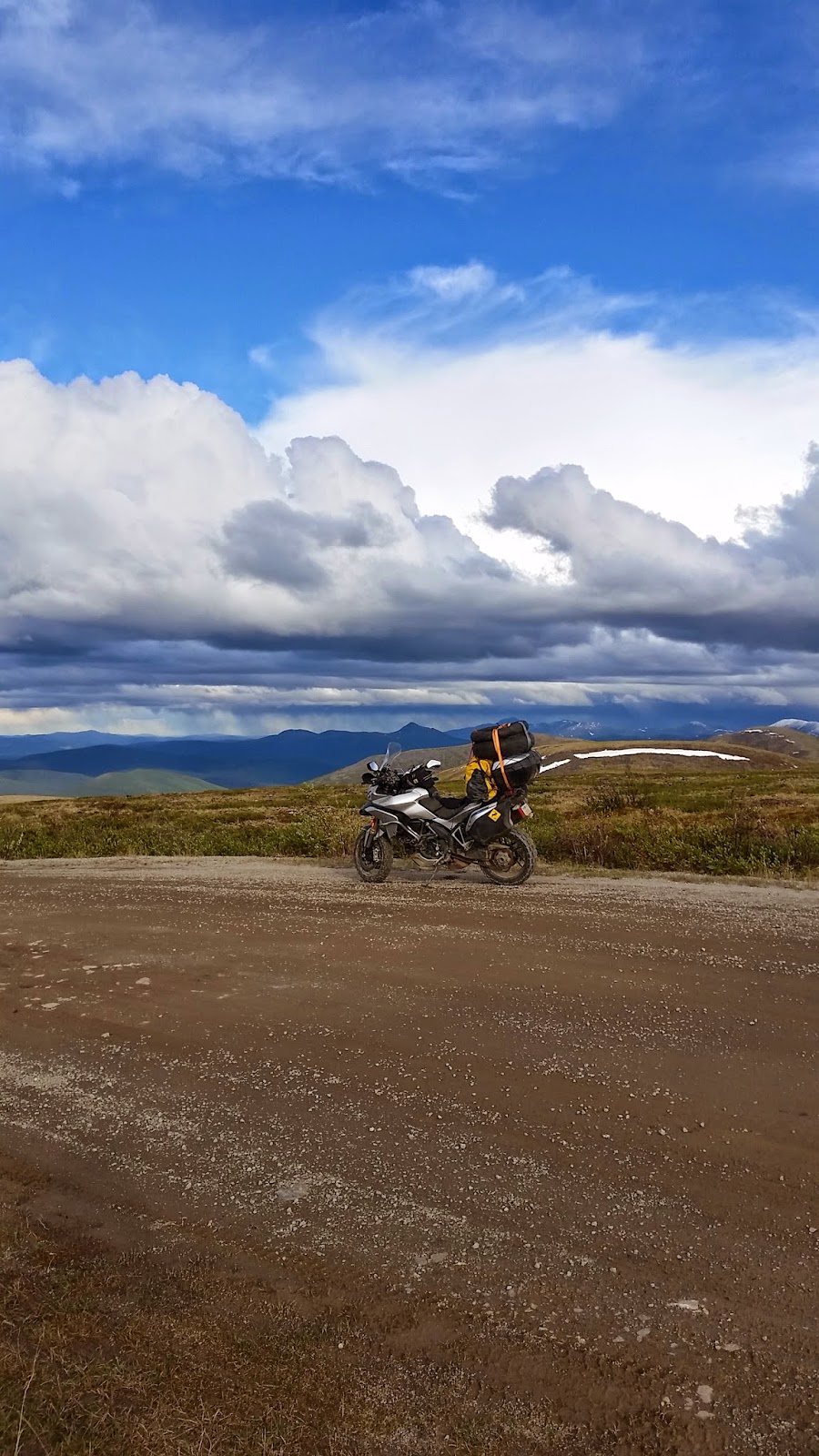 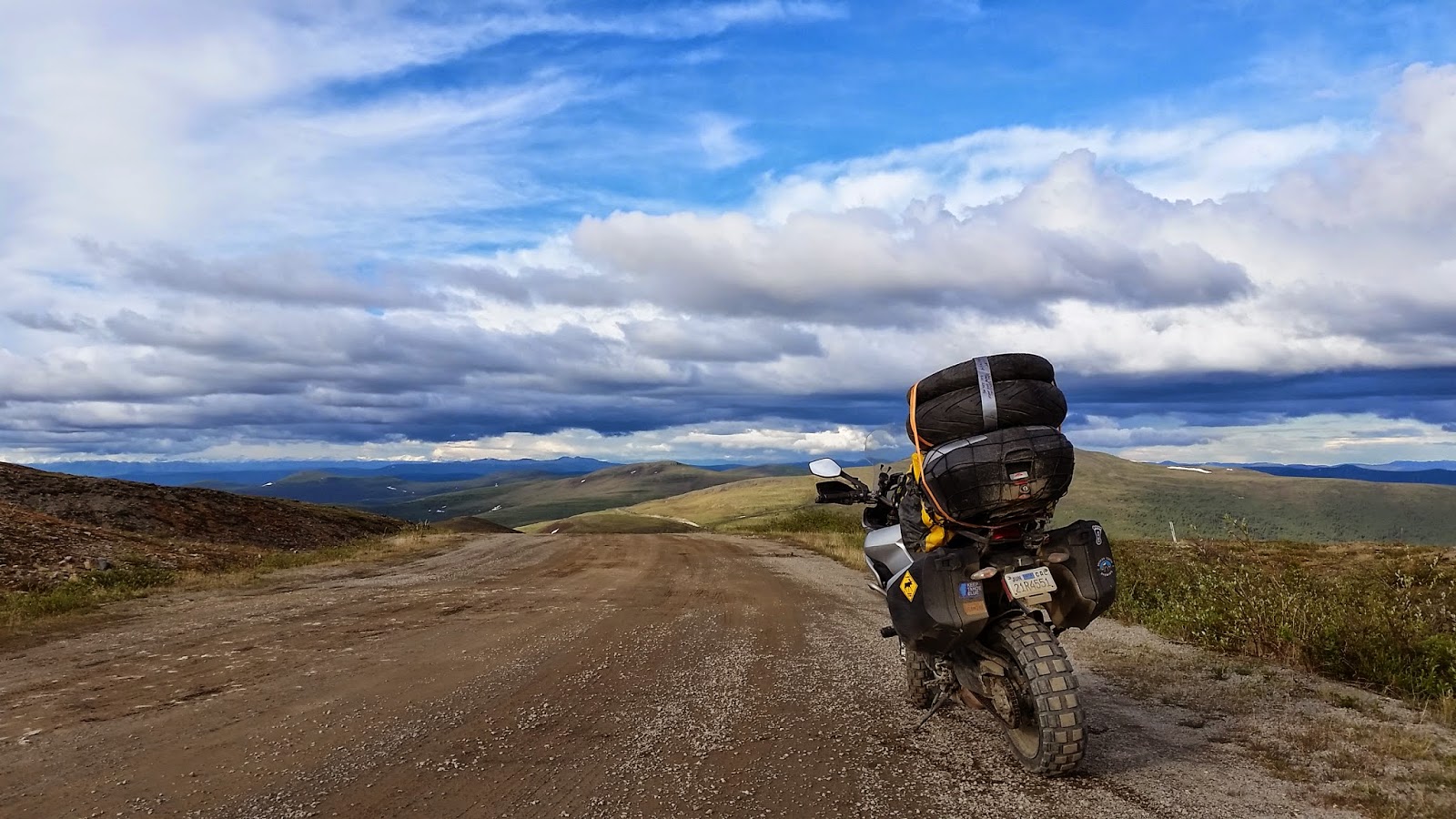 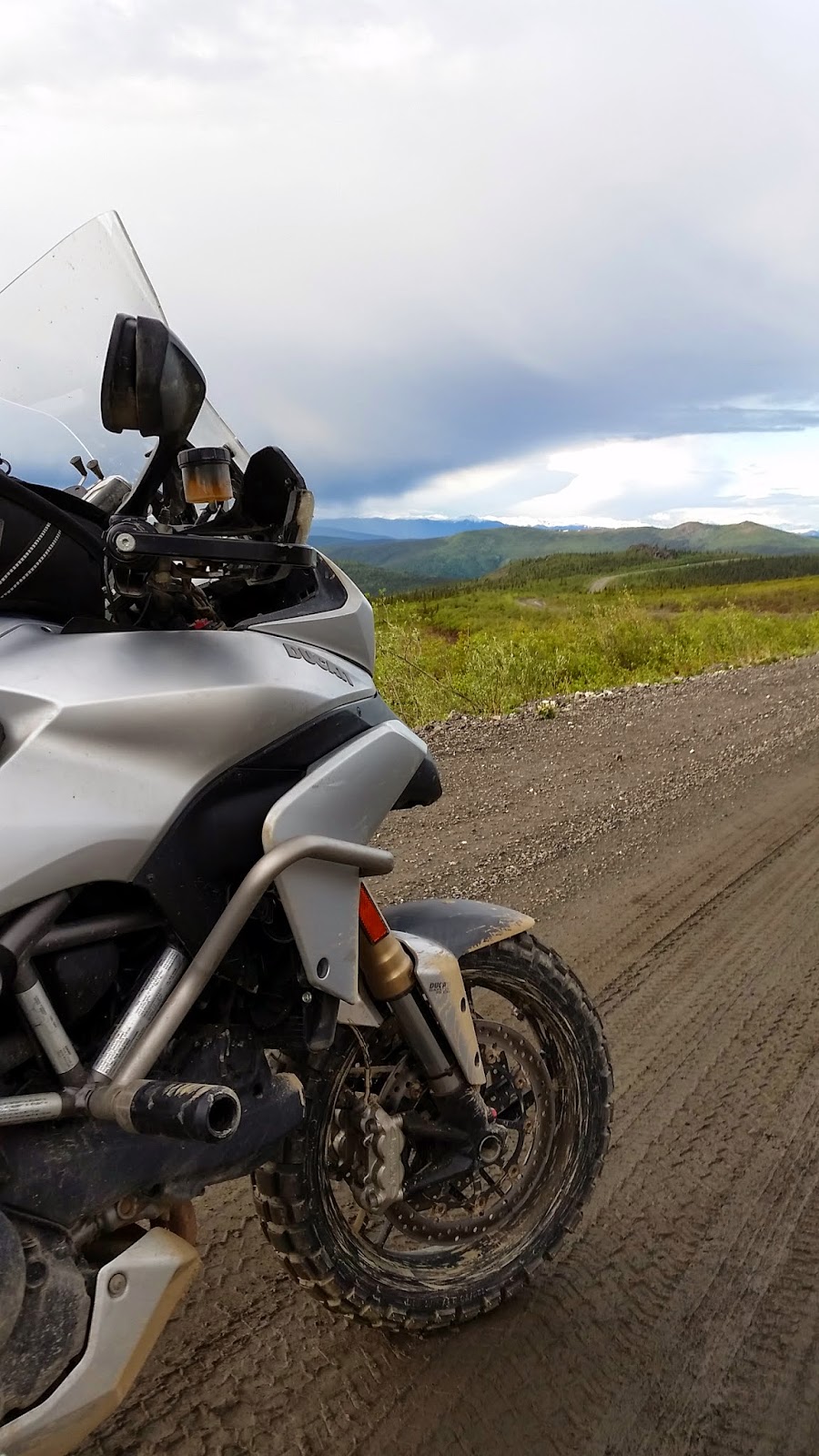 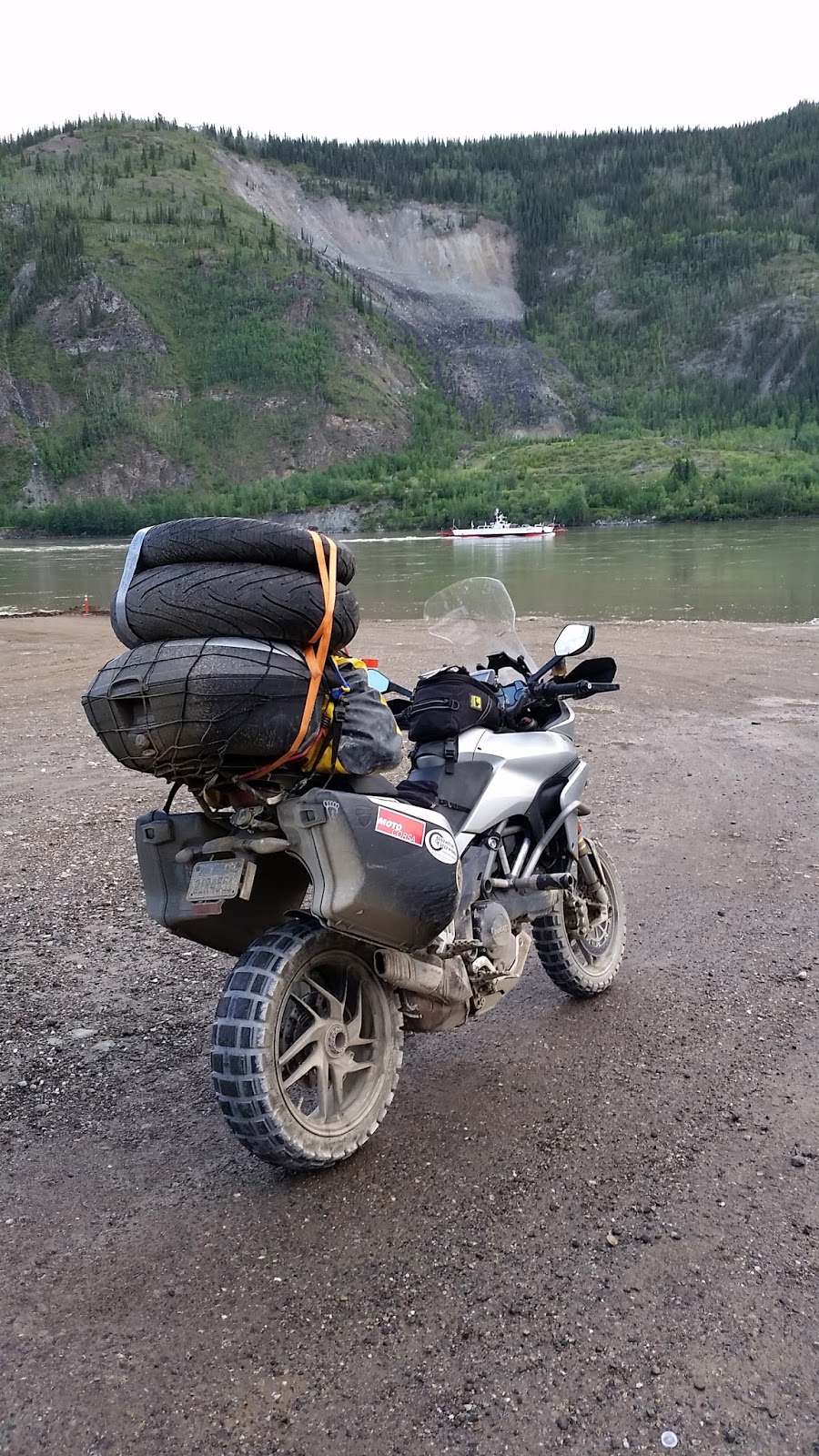 So Dawson City is this little tourist/gambling town right across the boarder into the Yukon.  To get to the town from Alaska, you need to cross the river, which is moving very fast.  They use a powerboat to get all vehicles across.  The picture just above is of my bike waiting for the next boat.  Take a look! 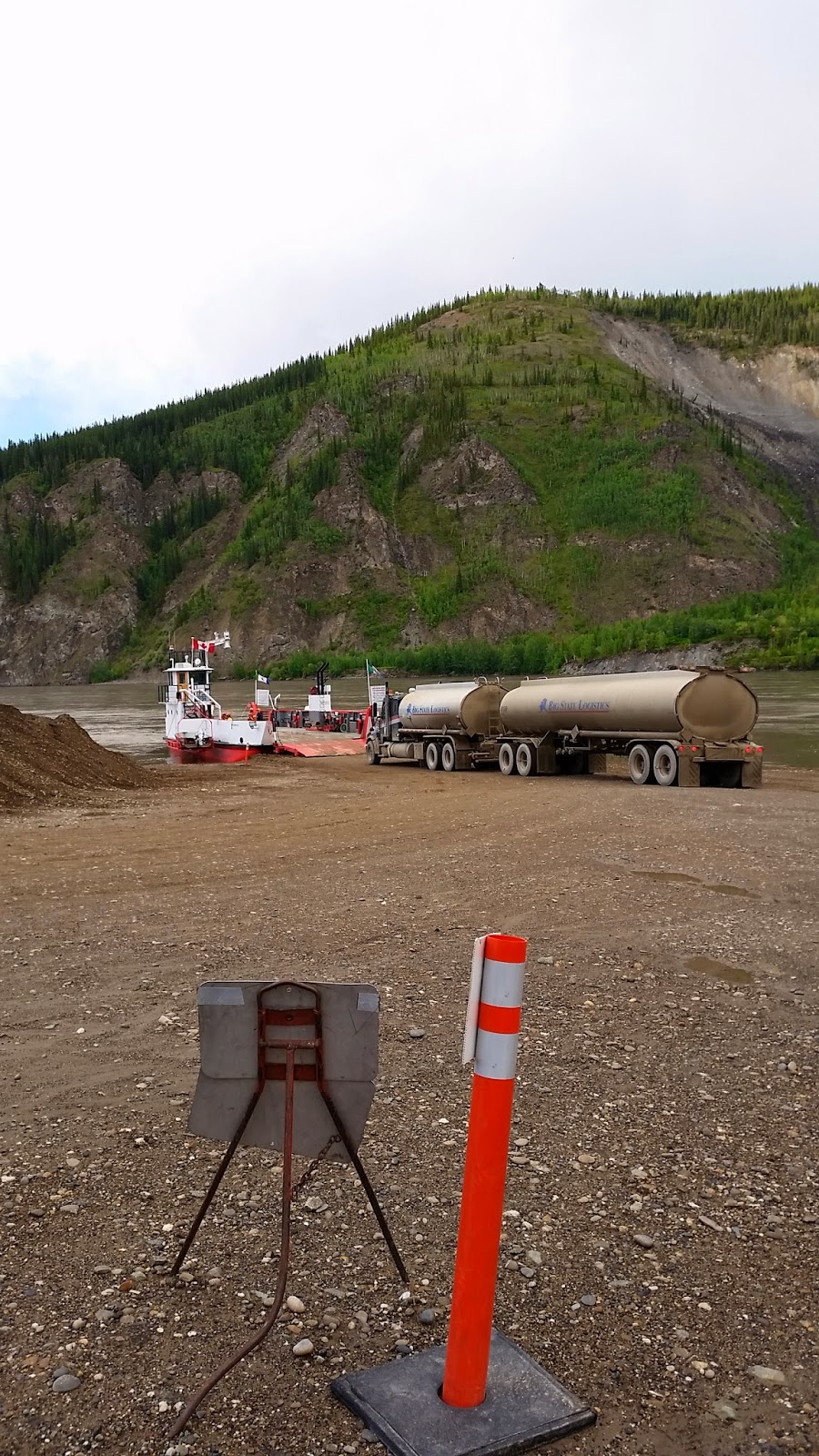 They do have a nice little paddleboat ride you can also take on the river.   Tough motorcyclists dont take paddleboats, they are for sissies.  Which is of course why I didn't take it! Duh! 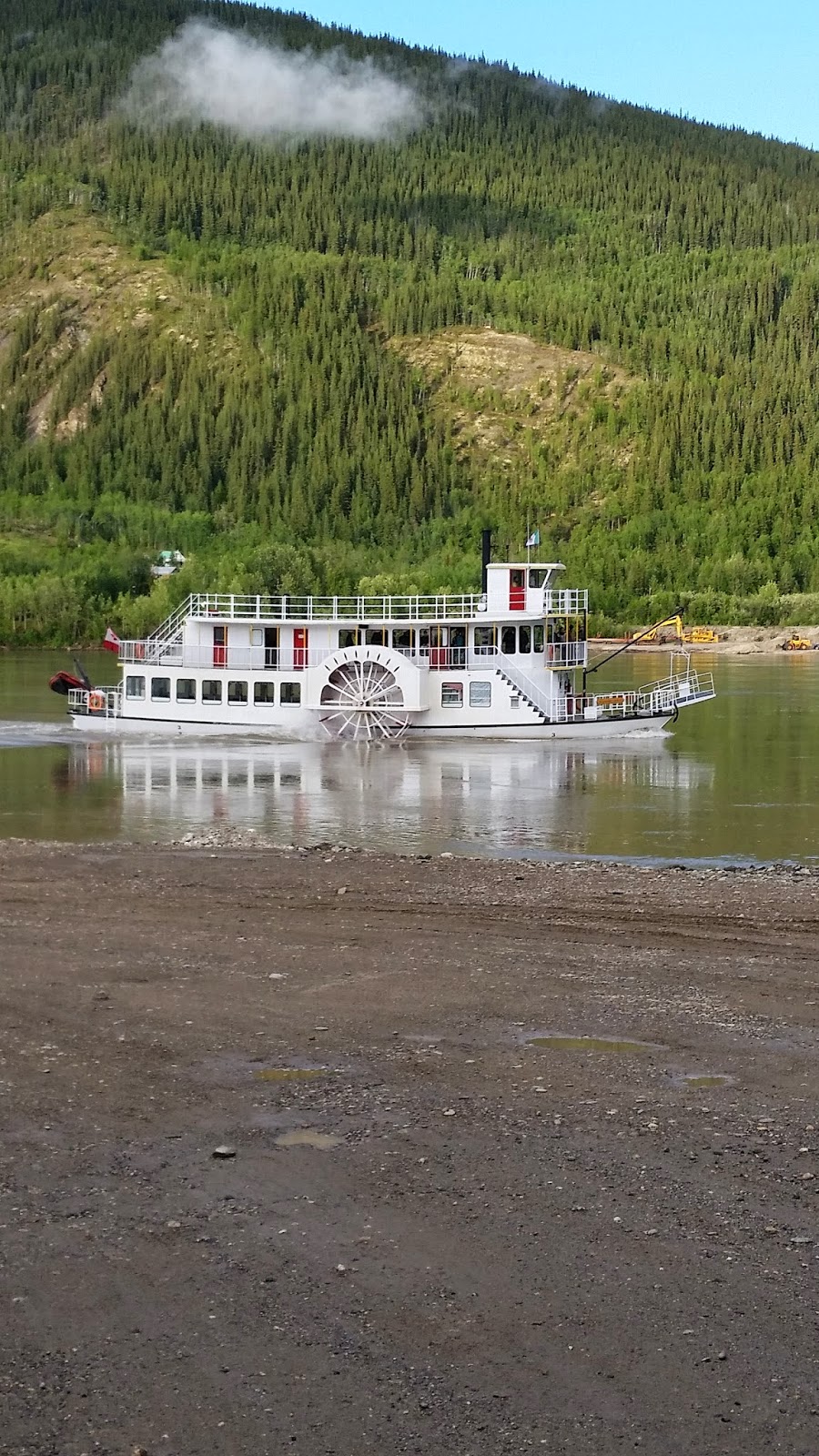 Front row seat on the powerboat. 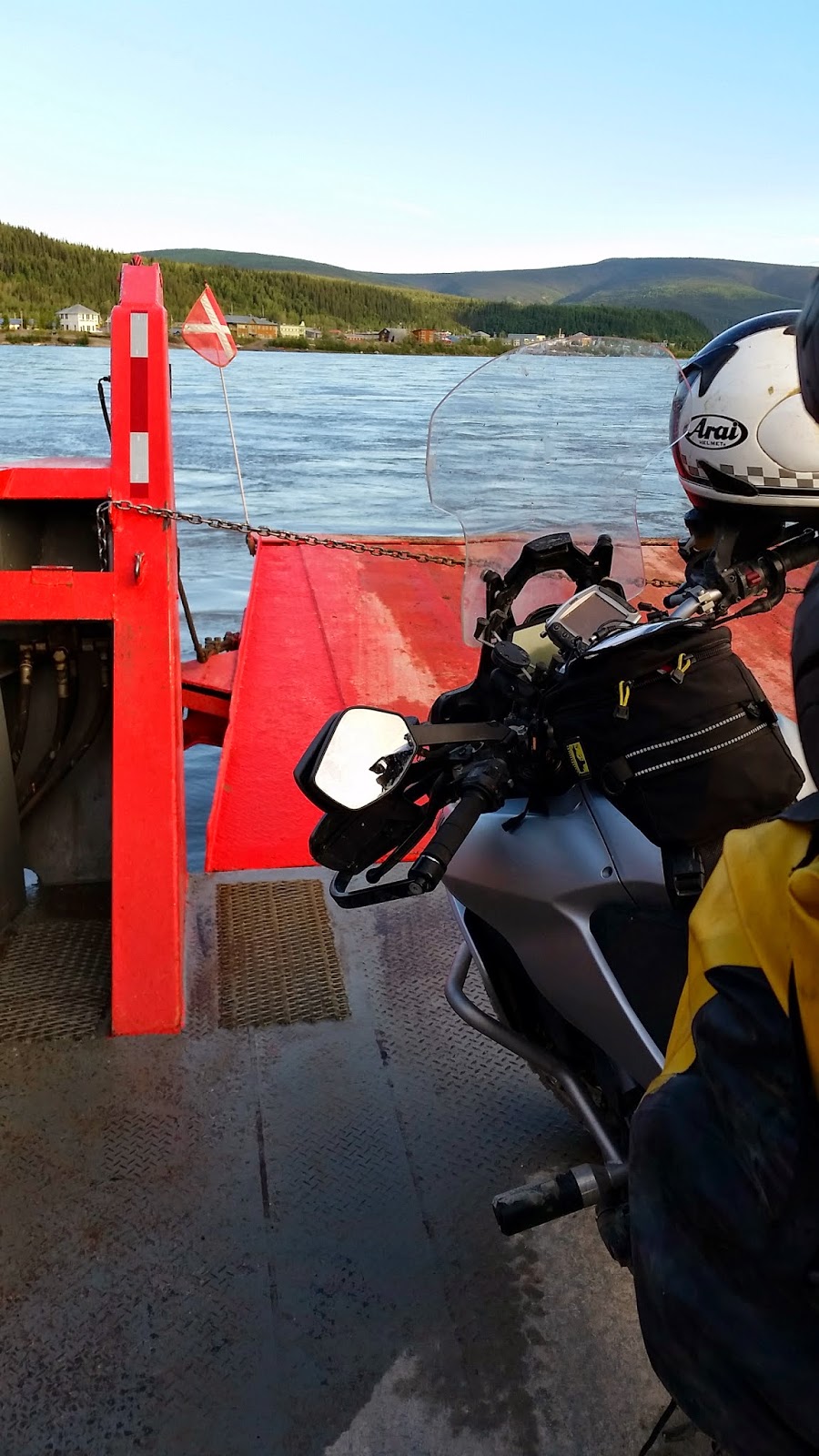 I made it to Dawson and of course it was still light out!  About 9pm.  The reason the motorcycle Dust to Dawson gathering happens on this date is because it's summer solstice.  It's bright out 24 hours a day.  I rolled into the camp site and found rick standing there with a beer in hand shooting the shit with some new friends.  I rolled in and set up my tent. 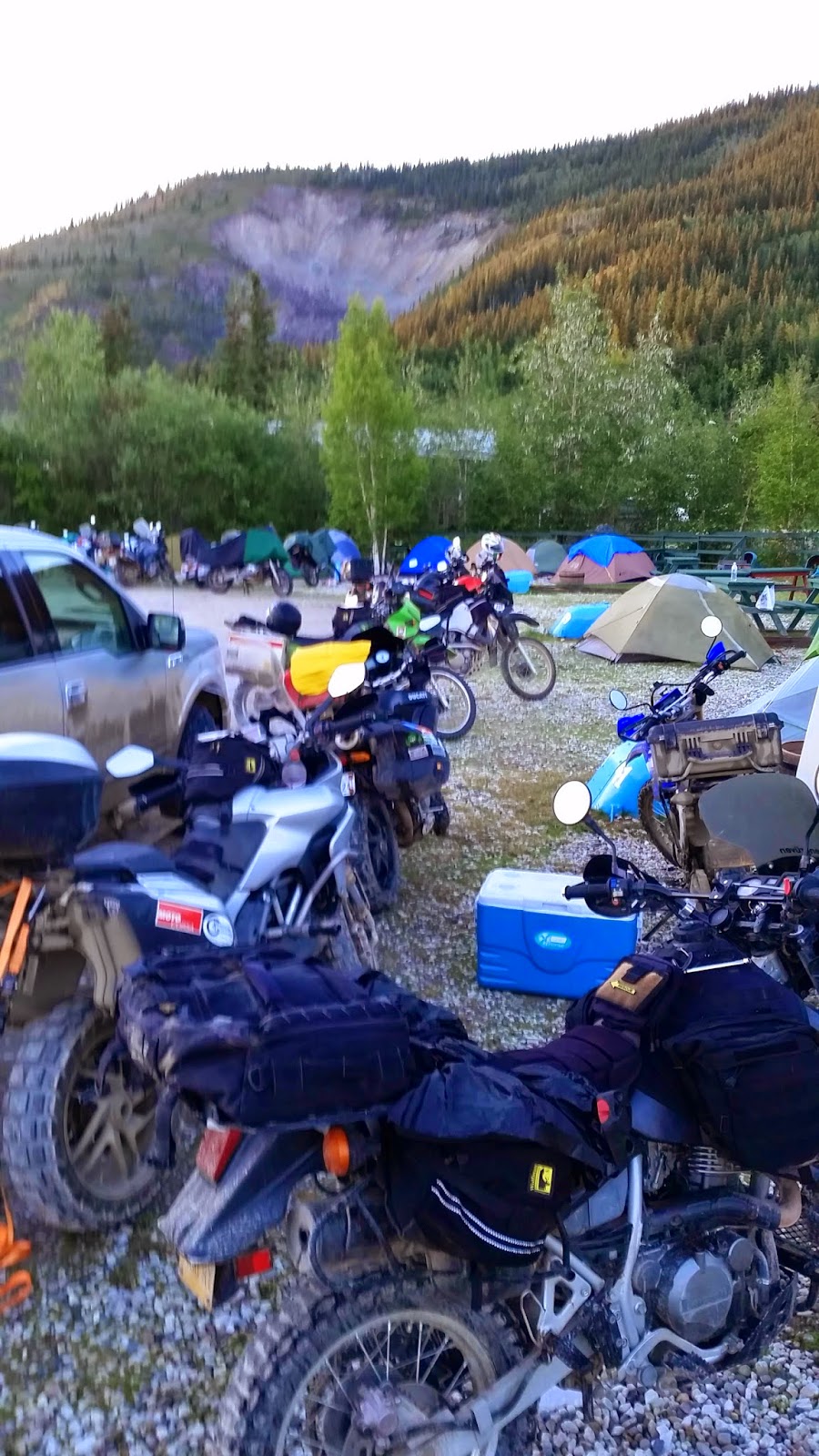 This was a picture of one of the downtown streets in Dawson at around 1230am. 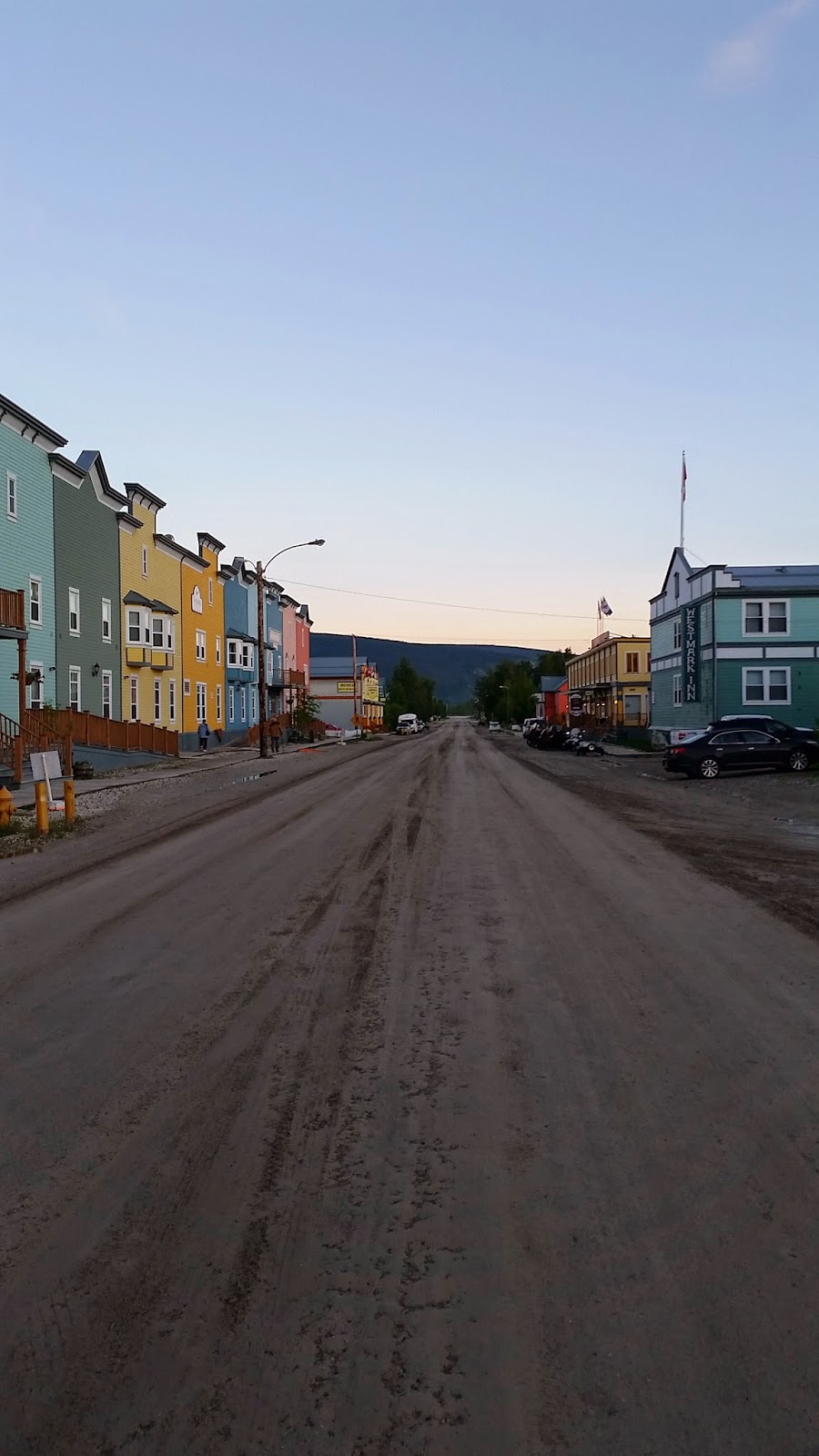 And this is Rick after leaving the bar around 230am... 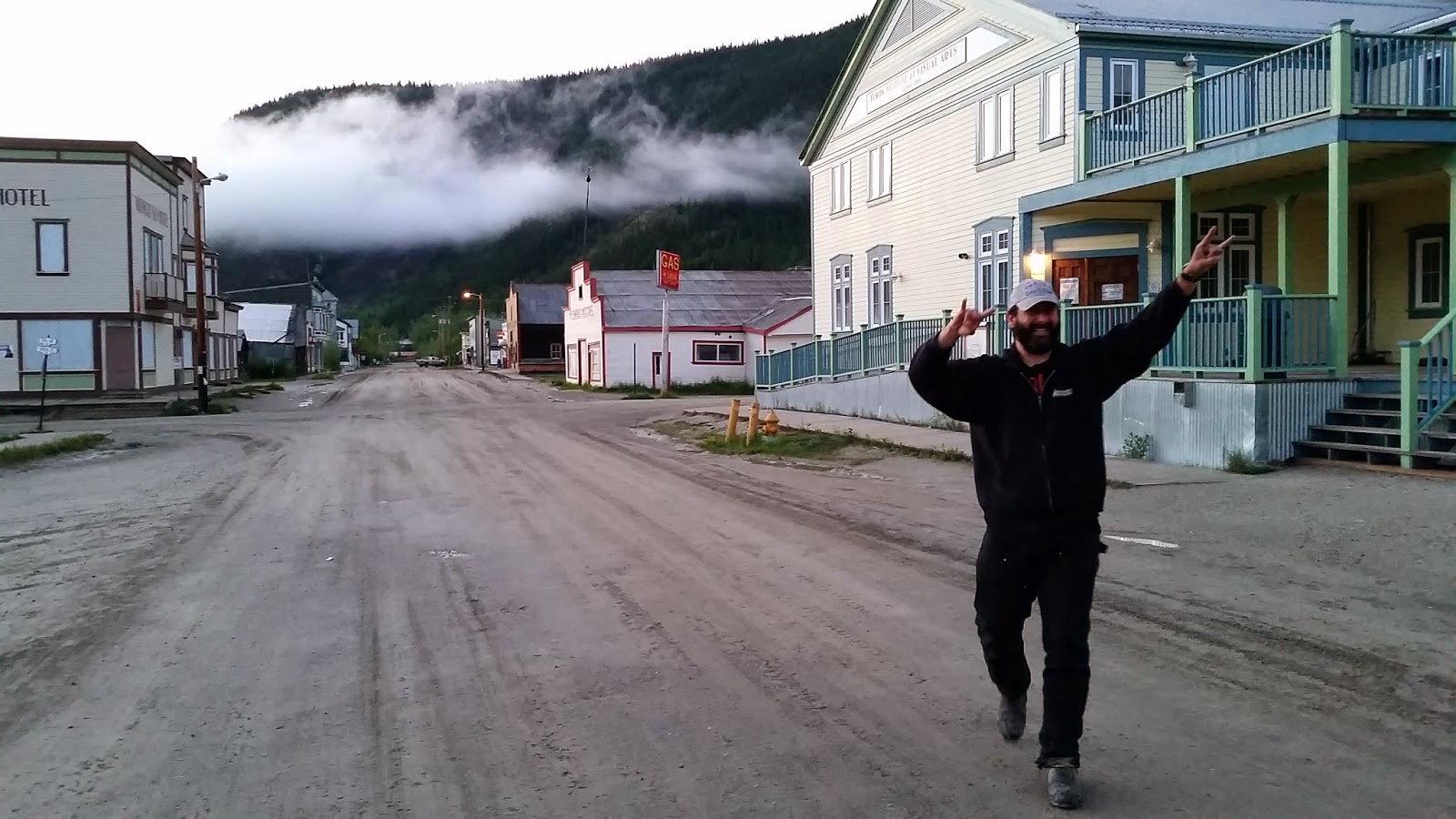 After being at this bar.... 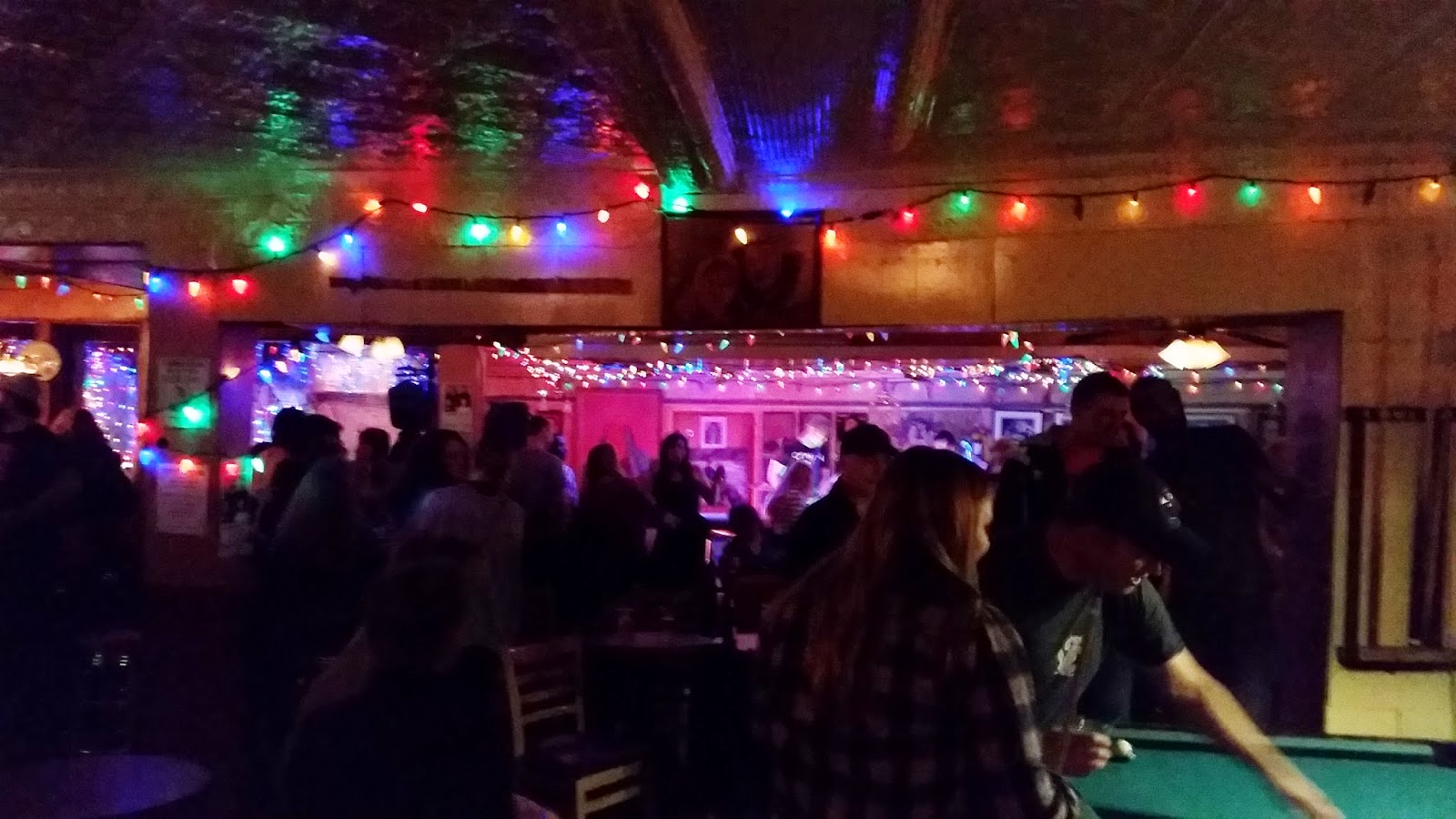 This was an interesting collection of people at this bar.  The music was actually really great.  The band was from Whitehorse, which is a city we stayed at earlier on the way to AK.  I met a bunch of new guys, some from MotoQuest.  We stayed until 2am, then headed for the local outdoor food spot where we crushed some pizza and shish kabobs.  Git in my belly!!

Tomorrow was the D2D gathering.  Time to get some sleep.  But wait, it's still sunny out?